By DEREK HUNTER  I Daily Caller 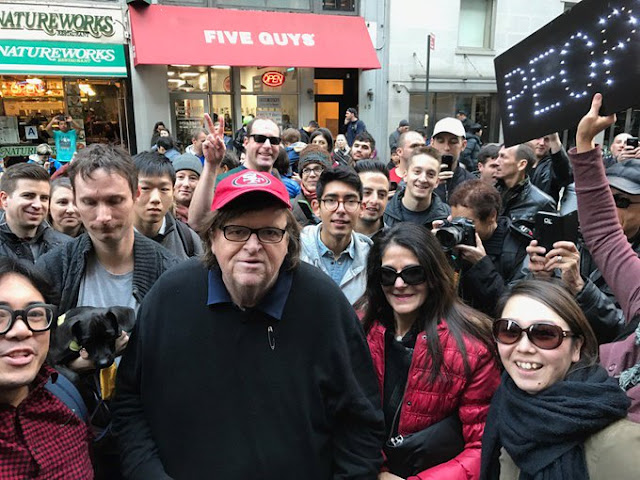 Progressive director Michael Moore participated in an anti-Trump protest in New York that was organized by Russians, according to information released Friday by Deputy Attorney General Rod Rosenstein.
Rosenstein announced indictments from Special Counsel Robert Mueller Friday against 13 Russian nationals for meddling in the 2016 election, highlighting how the Russians used social media to stir up strife and anger on social media using memes and unwitting Americans to do their bidding. One Russia-sponsored event was a protest of then President-Elect Donald Trump on Nov. 12, 2016, called “Trump is NOT my President,” and it involved Moore.
(RELATED: Mueller Confirms: Russia Used Anti-Trump Resistance To Stoke Division)
On the day, Moore tweeted:
--------

On his Facebook page, Moore embedded a long video of him “reporting” from the Putin-organized event, calling Trump a “sociopath” and a “racist.”

Moore’s Facebook page is littered with charges that Trump and Republicans are Russian tools and enemies of the American people.

In advance of the Electoral College vote making Trump the 45th president, Moore wrote a long post appealing to Republican electors to refuse to support the president-elect because of “Russian hacking” of the election.

(RELATED: Growing Evidence That Russia Using ‘The Resistance’ To Stoke Division)
“I know you HAVE to be full of worry and consternation over the way Russia hacked into our election in order to help Trump,” Moore wrote.
http://dailycaller.com/2018/02/19/michael-moore-russian-anti-trump-rally/
Posted by Frances Rice at 9:16 AM