Why the Center-Left Became Immoderate

By Shadi Hamid I The Wall Street Journal 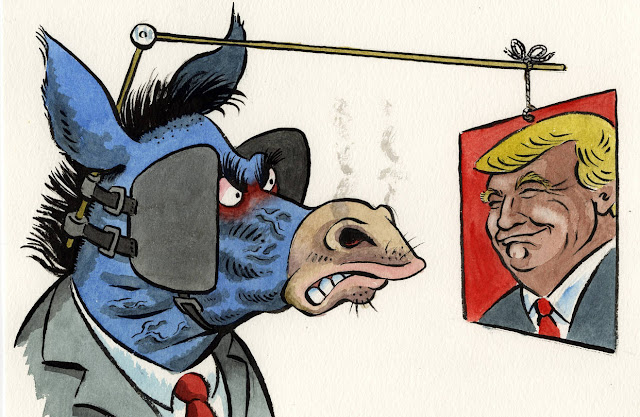 In polarized times, those without a clear guiding ideology become the most vicious partisans.

Democracy dies when one side loses respect for electoral outcomes and comes to consider the other illegitimate. Recent U.S. presidents, at least since Bill Clinton, have faced a degree of implacable opposition from the further reaches of the opposing party. But of late the problem seems to have intensified—and disrespect for democratic outcomes has become particularly acute on the center-left.

That may sound odd. We generally assume the political “middle” to be more reasonable and rational—and less partisan. Ideologues are the ones less amenable to compromise. But although centrists are by definition skeptical of ideology, that does not make them any less prone to partisanship.

In polarized times, political competition comes to resemble tribal warfare. Everyone is under pressure to close ranks and boost morale. Lacking an animating vision beyond expert-led incrementalism, center-left politicians and pundits have few options to rally the Democratic base other than by attacking adversaries and heightening partisan divides. The other option—laying out an alternative that differs from what Hillary Clinton or even President Obama offered—requires ideological conviction.

That would explain why Rep. Adam Schiff —previously “known as a milquetoast moderate,” according to the New Yorker—has emerged as one of the most outspoken figures in the Russian collusion investigation. Before being appointed to succeed Mrs. Clinton in the Senate, Kirsten Gillibrand was an upstate New York representative who belonged to the Blue Dog Coalition. Her 2013 New Yorker profile was titled “Strong Vanilla”—and she now boasts the upper chamber’s most anti- Trump voting record.

Many Democrats are unwilling to accept that Mrs. Clinton actually lost to Donald Trump. Those who find her standard center-left technocratic worldview congenial are disinclined to accept ideological explanations, so they look for scapegoats: Russia, James Comey, even the voters who supported Donald Trump.

Mrs. Clinton herself pre-emptively offered the last explanation in September 2016, when she consigned half of Trump supporters to “the basket of deplorables”—“they are irredeemable, but thankfully they are not America.” As 2020 approaches, Democrats run the risk of repeating that mistake, taking for granted, as Mrs. Clinton did, that Mr. Trump’s unique flaws will be sufficient to ensure his defeat.

Contrast the centrists with leftist standard-bearers like Sens. Bernie Sanders and Elizabeth Warren. They’re no fans of Mr. Trump, but they haven’t been at the forefront of calls for impeachment or intensifying the Russia investigation.

Instead, they have focused their efforts on broadening the Democratic Party’s base with a more inclusive populism that takes seriously the systemic causes of inequality. Both have resisted the urge to write off Mr. Trump’s supporters, and Mr. Sanders in particular has made outreach to Republicans a major part of his postelection message. Mr. Sanders seems instinctively uncomfortable with identity politics, a Democratic preference that makes it harder to reach out to Trump voters since identities are more fixed than interests or ideas.

The mainstream media generally share a center-left worldview. Most reporters aren’t Marxists or even Sandernistas, and anti-Trump alarmism—what some scholars have called “tyrannophobia”—has become a consistent theme.

The idea of a Trump dictatorship may be compelling, but that doesn’t make it right, particularly when it distorts how one perceives actual tyranny.

People want something to believe in, but in the absence of a strong ideological sensibility among Democrats, partisanship and alarmism offer ready recourse. Having an enemy is a powerful motivator, and hating Mr. Trump is entertaining to boot. Politics might otherwise return to boring discussions on how to improve health care or education, why we need more experts, or why facts are important.

The relationship between partisanship and ideology may be changing in unexpected ways. Yesterday’s centrists have become some of today’s most intense partisans. There’s nothing wrong with partisanship per se, but it’s a problem when the parties view each other as enemies and existential threats. Centrism may seem an obvious solution, but too little ideology can be as dangerous as too much.

Does this mean we need more ideologues? The word sounds like an insult, connoting inflexibility and narrow-mindedness. But politicians who are committed to a set of ideas also tend to have less to prove. They don’t need to play to the base; they can lead the base. Congress—and the country—could use more of them.

Mr. Hamid is a senior fellow at the Brookings Institution and author of “Islamic Exceptionalism: How the Struggle Over Islam is Reshaping the World.”