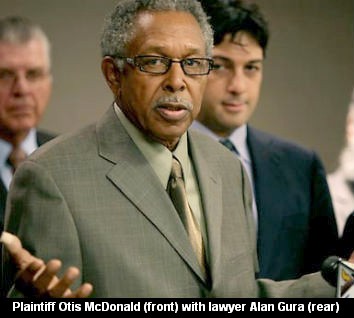 In 2010, the US Supreme Court decided a case that highlighted how gun control laws are rooted in the racist past of the Democratic Party that enacted "Black Codes," which prohibited newly freed slaves from exercising their Second Amendment right to own guns for self-defense.
The case of McDonald v. City of Chicago  was filed by black Chicago residents led by Otis McDonald who just wanted to have the right to protect himself from criminals who terrorized him in his home with frequent break-ins. The Court ruled that the Second Amendment right to keep and bear arms applies to state and local governments.
At the heart of the McDonald case is the Fourteenth Amendment to the US Constitution that was pushed through by Republicans after the Civil War, which codified that black Americans have the same right under the Second Amendment to bear arms as white Americans.

The only current black US Supreme Court member, Justice Clarence Thomas, who was appointed by Republican President George H. W. Bush, courageously delved into the racist origins of gun control laws to demonstrate that such laws have no place in a nation of free people.

The liberal justices on the Court, including Justice Sonia Sotomayor who was appointed by Democrat President Barack Obama, voted against the black plaintiff and his fellow Chicago residents.

The McDonald case provides a bird eye's view of the history of Democratic Party racism.

Referenced in the Court's opinion is the 1856 Republican Party Platform that includes language about the "right of the people to keep and bear arms."

A key source used by the Court is the book "Reconstruction: America's Unfinished Revolution 1863-1877" by Dr. Eric Foner.

Dr. Foner's book reveals how, before the Civil War ended, the Southern States, which were controlled by Democrats for over 100 years, enacted "Slave Codes" that prohibited slaves from owning firearms.

After Republican President Abraham Lincoln issued the 1863 Emancipation Proclamation that freed slaves in the rebelling States, and after Republicans pushed through the Thirteenth Amendment freeing all the remaining slaves, Democrats in the South persisted in keeping the newly freed slaves from owning guns, the means to protect themselves.

The Supreme Court in the McDonald decision wrote about how, after the Civil War, the Southern States controlled by Democrats passed "Black Codes" to systematically disarm blacks.

Included in this mass disarmament were the over 180,000 blacks who returned to the South after serving in the Union Army.

In response to the "Black Codes," the Republican-controlled Congress passed the Civil Rights Act of 1866.

But the Democrats would not be deterred.

Very soon after the 1866 law was enacted, Alabama, followed by other Southern States, again passed more "Black Codes" that made it illegal for blacks to own firearms.

Cited by the US Supreme Court in the McDonald case as an example of a discriminatory black code is the Mississippi law that stated:

"[N]o freedman, free negro or mulatto, not in the military service of the United States government, and not licensed so to do by the board of police of his or her county, shall keep or carry fire-arms of any kind, or any ammunition, dirk or bowie knife."

In one Southern town, according to the US Supreme Court, the marshal confiscated the weapons of the returning black Union soldiers and, at every opportunity, promptly shot black people.

The Court's McDonald decision records that:

In his book about Reconstruction, Dr. Foner revealed that in 1866, the Ku Klux Klan was started as a Tennessee social club.

According to Dr. Foner, the Klan became a military force serving the interests of the Democratic Party and spread into other Southern States, launching a "reign of terror" against Republican leaders, black and white. Over 3,000 Republicans were killed by the Klan, 1,000 of whom were white.

The Klan would "order the colored men to give up their arms; saying that everybody would be Kukluxed in whose house fire-arms were found.”

Republican Senator Samuel Pomeroy described three "indispensable" "safeguards of liberty under our form of Government", one of which was the right to keep and bear arms.

"Every man . . . should have the right to bear arms for the defense of himself and family and his homestead. And if the cabin door of the freedman is broken open and the intruder enters for purposes as vile as were known to slavery, then should a well-loaded musket be in the hand of the occupant to send the polluted wretch to another world, where his wretchedness will forever remain complete.”

Pomeroy's words reflect exactly the sentiment expressed by Otis McDonald and other black plaintiffs who filed a law suit against the Democrat-controlled City of Chicago that had confiscated their weapons, leaving them to the mercy of intruders who had broken open his door and entered his home for vile purposes.

In this episode, Michael reviews the history of American gun control laws and describes the founding of the NRA.

”Cynical Democrat politicians who failed at every level to prevent the high school shooting in Parkland, Florida, are now excusing everybody who had anything to do with preventing the shooting and placing all of the blame on the NRA, a civil rights organization that had absolutely nothing to do with the shooting."

“This is par for the course for Democrats, who have long pushed gun control to oppress blacks and other minorities.”

About the video, Knowles says:

“We will analyze the racist history of gun control and the purpose of the Second Amendment.”