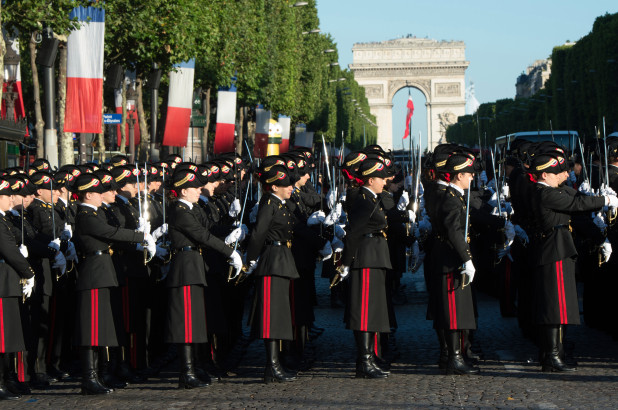 The Pentagon has confirmed that it is in the preliminary stages of planning a military parade down Pennsylvania Avenue — one of President Trump’s fondest desires.

Trump was, understandably, impressed in a visit to France last July by the pageantry of the Bastille Day parade. The parade dates back to the 1880s.

Nothing the United States comes up with will match its resonance or its beloved, unifying nature.

Trump’s motivation for ordering up a parade anyway is pretty obvious. He likes big, brassy displays, and he gets a kick out of being the commander in chief of the most impressive military on the planet.

The president’s impulse itself shouldn’t be enough to roll the armor down Pennsylvania Avenue, but we don’t lack for reasons to honor our military.

The Pentagon has already floated the idea of a parade on Veterans Day to mark the 100th anniversary of the end of World War I, an epic event by any standard. We’re also overdue to honor on a large scale the sacrifice of our troops over the past 17 years in the war on terror.

“We have a Napoleon in the making here,” pronounced Rep. Jackie Speier. Of course, coming to power in a coup, literally crowning himself emperor of France and conquering a swath of Europe tell us much more about Napoleon’s political character than any of his parades.

It’s not obvious when it became untoward or dangerous for the United States to hold military parades. Are we supposed to believe that the integrity of American character has depended on having no military parades since 1991, when there were big honking ones in Washington and New York to celebrate the end of the Gulf War?

In Washington, Patriot missiles, M270 multiple-launch rocket systems and M109 self-propelled howitzers appeared on the parade route, and a freakin’ Harrier jump jet landed on the Mall. In New York, they dragged an A-7 Crusader attack jet down the Canyon of Heroes. The republic survived.

The unsatisfactory outcomes of the Vietnam and Korean Wars meant we didn’t have parades to mark those conflicts. (We should have.) But it didn’t occur to anyone that it was inappropriate or undemocratic to display military hardware. During World War II, there were big military parades in New York City, and state-of-the-art self-propelled howitzers drove by the New York Public Library with no one getting the vapors.

Dwight Eisenhower’s first inaugural showcased an 85-ton atomic cannon, and the second, a Redstone ballistic missile. They broke out four nuclear missiles for JFK’s inauguration, along with an impressive battery of tanks, armored vehicles and self-propelled howitzers.

The parade controversy is another sign that the place of patriotism in our national life, and what that patriotism should consist of, is a Trump-era flashpoint.

Trump’s critics tend to think patriotism itself is atavistic, or that its locus should be only in our ideals. Trump’s patriotism is more grounded, and insists that we are a nation, not just an abstraction.

Ideally, everyone would realize this. Once upon a time, we did.

But now the best argument against Trump’s parade is that it will become a cultural-war flashpoint and “the resistance” will try its utmost to ruin the affair.

Just imagine a protester in a pussy hat in a Tiananmen Square-style standoff with an M-1 Abrams tank.

Meanwhile, on July 14, the Bastille Day parade will in all likelihood come off once again without a hitch.