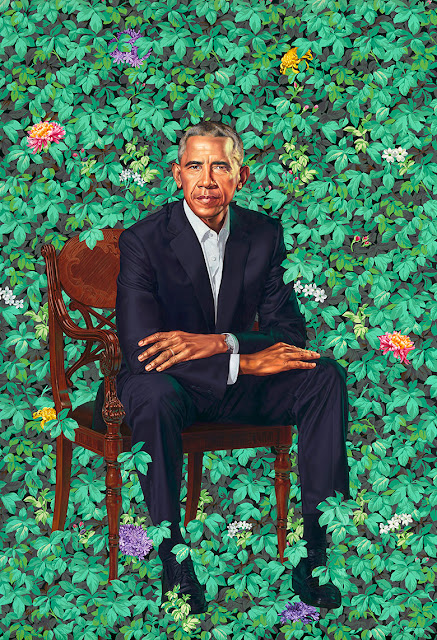 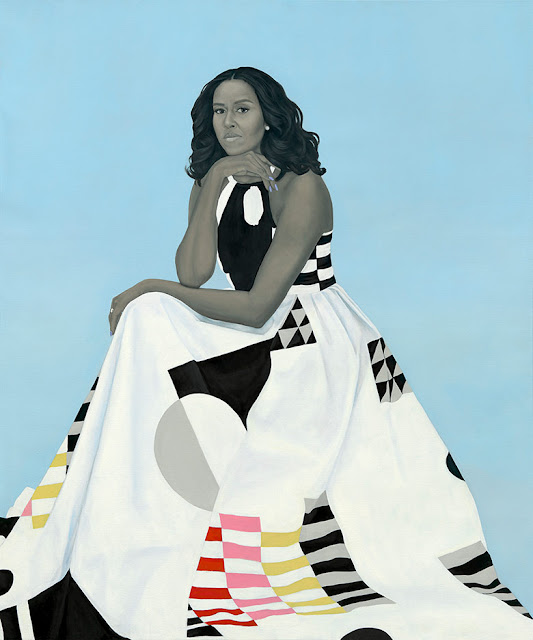 Kehinde Wiley, the artist behind Obama’s portrait, is not some run-of-the-mill painter, however. 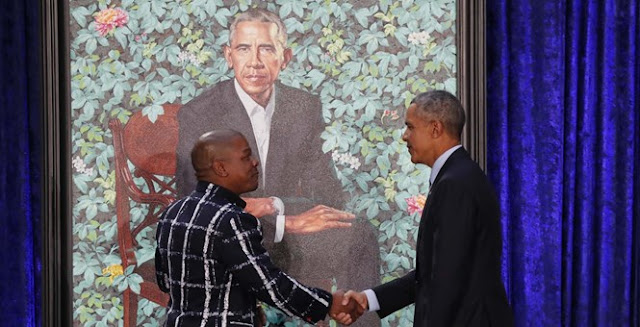 His best known works all place a strong emphasis on promoting an ideal of empowered black men and women, frequently including regal or aristocratic imagery and floral or naturalistic background designs.

Two such paintings have come into sharp focus today because of their depictions of black women holding bloody knives and the severed heads of white women. 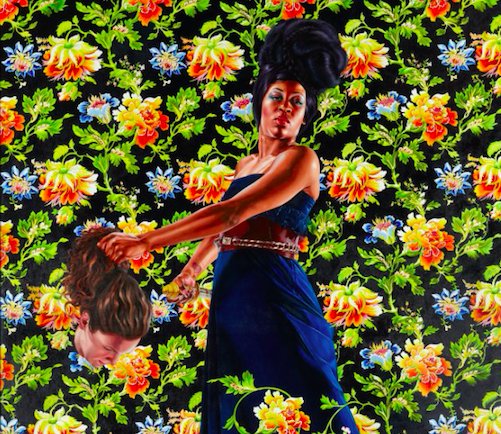 Both paintings depict a reimagining of traditional European paintings of the Biblical character Judith beheading the Assyrian general Holofernes, except Wiley changed Judith into a black woman and Holofernes into a white woman.

Wiley's official website prominently displays the artist posing in front of one of the beheading paintings in a photograph presumably taken in his studio. 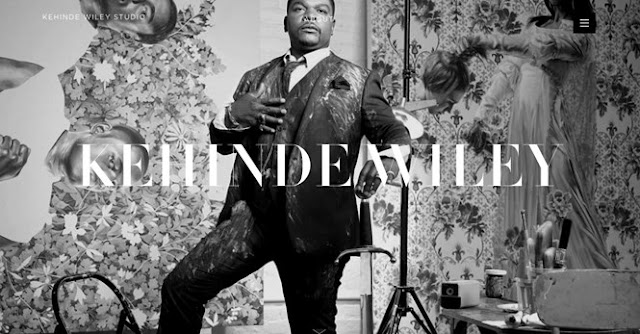 The other painting can be found under Wiley's 2012 collection titled "An Economy of Grace" and was described by the artist himself as a "play on the ‘kill whitey’ thing." A description of the painting from the North Carolina Museum of Art's official blog makes clear that Wiley's conscious intention was to create a work that glorified the image of a black woman holding power over a white woman by killing her [emphasis mine]: 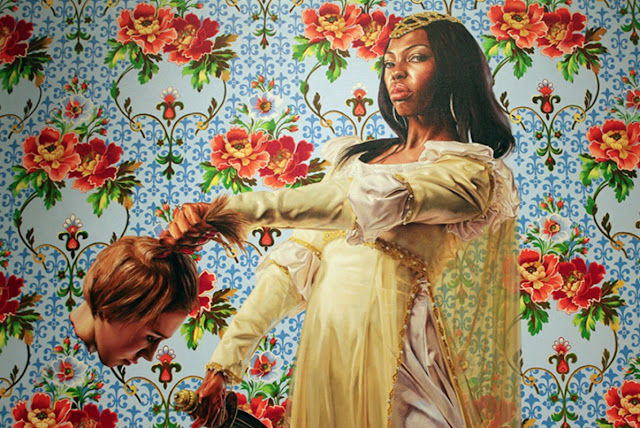 Known for his monumental portraits of young black men, placed in historical poses and settings appropriated from Old Master paintings, Kehinde Wiley critiques the racism of art history while also commenting on contemporary street culture and masculine identity. Reinventing classical portraiture and questioning who is represented in the portraits found in museums worldwide, Wiley states, “The whole conversation of my work has to do with power and who has it.”

Judith and Holofernes is from Wiley’s most recent body of work and his first series of paintings to feature female subjects. [...] The subject is taken from the apocryphal Old Testament Book of Judith, in which a Jewish town is under attack by the Assyrian army led by the general Holofernes. Judith, a widow from the town, goes to Holofernes under the pretense of helping him defeat the Jews. After he falls asleep, she cuts his head off with his own sword, and the town defeats the army. Wiley translates this image of a courageous, powerful woman into a contemporary version that resonates with fury and righteousness.

At Monday's ceremony, Wiley commended the Obamas for hiring black artists to paint their official portraits and suggested that the couple were sending a necessary message to America and the world that it is okay to be black. According to CNN:

"We can't not recognize the important significance of representation in art and the decision that this president and first lady have made in choosing artists like ourselves," said Kehinde Wiley, a Yale University-trained painter who was the first African-American artist to execute an official presidential portrait for the National Portrait Gallery.

"[T]hey're signaling to the rest of the world that it is OK to occupy skin that happens to look like this ... on the great walls of museums in the world," he told CNN's Christiane Amanpour.

"In so doing what I see there is true leadership," Wiley continued. "I see people who have the vision and the intent to not only be great people, but great thought leaders."

In a piece for The New York Times, Co-Chief Art Critic and Pulitzer Prize winner Holland Cotter praised Obama's choice of Wiley as his painter [emphasis mine]:

With the unveiling here Monday at the National Portrait Gallery of the official presidential likenesses of Barack Obama and the former first lady, Michelle Obama, this city of myriad monuments gets a couple of new ones, each radiating, in its different way, gravitas (his) and glam (hers).
(…)
Not only are the Obamas the first African-American presidential couple to be enshrined in the collection. The painters they’ve picked to portray them — Kehinde Wiley, for Mr. Obama’s portrait; Amy Sherald, for Mrs. Obama — are African-American as well. Both artists have addressed the politics of race consistently in their past work, and both have done so in subtly savvy ways in these new commissions. Mr. Wiley depicts Mr. Obama not as a self-assured, standard-issue bureaucrat, but as an alert and troubled thinker. Ms. Sherald’s image of Mrs. Obama overemphasizes an element of couturial spectacle, but also projects a rock-solid cool.

It doesn’t take #BlackLivesMatter consciousness to see the significance of this racial lineup within the national story as told by the Portrait Gallery. Some of the earliest presidents represented — George Washington, Thomas Jefferson — were slaveholders; Mrs. Obama’s great-great grandparents were slaves. And today we’re seeing more and more evidence that the social gains of the civil rights, and Black Power, and Obama eras are, with a vengeance, being rolled back.

Wait a minute, did he really just say "the social gains" of "Black Power" and tie that in with Obama's presidency? What exactly have black power movements done to positively advance social discourse in either the past or the present?

Unfortunately, Cotter did not explain his comments about Obama, civil rights, and Black Power, but he did go on to paint his own glamorous and laudatory textual portrait of Wiley while scrupulously avoiding any mention of the decapitation paintings:

Mr. Obama has much better luck with his similarly high-profile portraitist. Mr. Wiley, born in Los Angeles in 1977, gained a following in the early 2000s with his crisp, glossy, life-size paintings of young African-American men dressed in hip-hop styles, but depicted in the old-master manner of European royal portraits. More recently he has expanded his repertoire to include female subjects, as well as models from Brazil, India, Nigeria and Senegal, creating the collective image of a global black aristocracy.
(…)
[Wiley] focused early on African-American portraiture precisely because it is so little represented in Western art history. [...] Mr. Wiley, with photo-realistic precision, casts actual people in fantastically heroic roles. (He modifies his heroizing in the case of Mr. Obama, but it’s still there.)

If anyone was in doubt about Obama's extreme political leanings before, hopefully his choice of Wiley to paint his official portrait clarifies the matter for good.