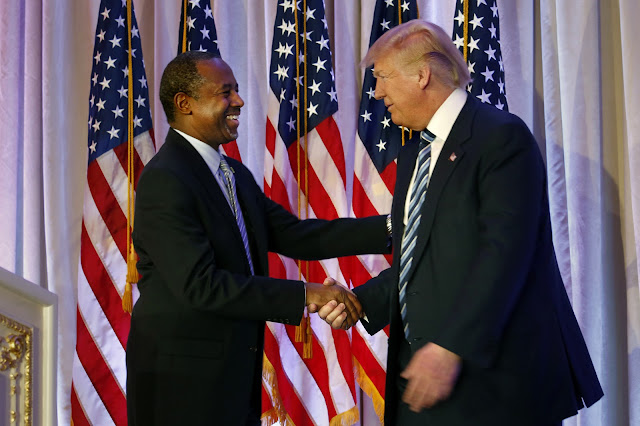 Dr. Ben Carson is the first African American to be nominated to a cabinet position by President-elect Donald J. Trump.


To view a video about this announcement, click here.


In a statement about his choice Trump said:
“I am thrilled to nominate Dr. Ben Carson as our next secretary of the U.S. Department of Housing and Urban Development. Ben Carson has a brilliant mind and is passionate about strengthening communities and families within those communities.
“We have talked at length about my urban renewal agenda and our message of economic revival, very much including our inner cities.  Ben shares my optimism about the future of our country as is part of ensuring that this is a presidency representing all Americans. He is a tough competitor and never gives up.”
Carson, a retired pediatric neurosurgeon, replied: “I feel that I can make a significant contribution particularly by strengthening communities that are most in need. We have much work to do in enhancing every aspect of our nation and ensuring that our nation’s housing needs are met.”
The selection of Carson is seen as a major step by Trump to keep the promises he made to inner cities that he would revitalize those communities with tax incentives for businesses to locate there, as well as making federal disaster declarations for blighted urban centers to allow for increased police protection, investment in infrastructure and demolition of abandoned properties.
The inspiring life story of Carson was dramatized in the TV movie, "Gifted Hands: The Ben Carson Story.”  Details about Carson's life are also contained in his book and the role of Carson in the TV movie was played by actor Cuba Gooding Jr. 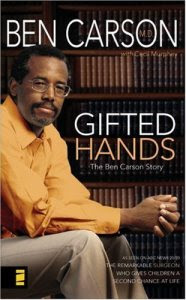 During speaking engagements, especially while he was a presidential candidate, Carson spoke about his difficult upbringing after his father left his family when Carson was only 8 years old.
Carson credits his mother with forcing him and Carson's brother, Curtis, to turn off the television and read a set number of books each week from the library, then report back to her on their contents. He said it helped him overcome what he has described as a bad temper and poor attitude toward education.
An overachiever, Carson graduated with honors from Southwestern High School, where he also became a senior commander in the school's ROTC program. He earned a full scholarship to Yale University and graduated in 1973 with a bachelor's degree in psychology before enrolling in the School of Medicine at the University of Michigan.
At age 33, Carson became the youngest doctor to head a major division at Johns Hopkins Hospital, taking over the department of pediatric neurosurgery.
In 1987, Carson became the first surgeon to separate conjoined twins joined at the back of the head. He and his wife, Candy, have also started the Carson Scholars Fund, which has provided more than 7,300 scholarships since 1994 to students across the country.
Carson received the Spingarn Medal, the highest honor bestowed by the NAACP in 2006. President George W. Bush awarded Carson the Ford's Theatre Lincoln Medal and the Presidential Medal of Freedom in February 2008.
In taking over HUD, Carson inherits an agency with some 7,600 employees and a budget of more than $30 billion.  Each year, HUD provides billions in aid to communities across the nation through various housing programs.
Posted by Frances Rice at 10:02 AM