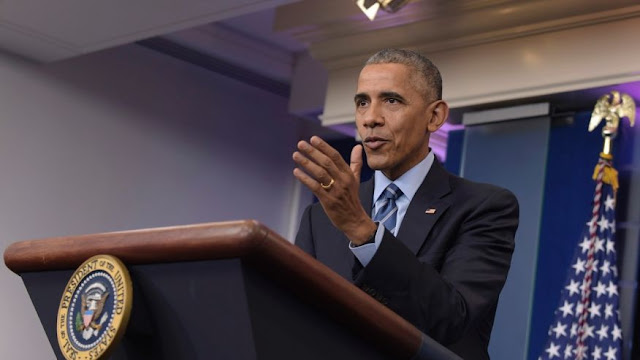 President Barack Obama speaks during a news conference, Friday, Dec. 16, 2016, in the briefing room of the White House in Washington. (AP Photo/Susan Walsh)


The vicious condemnation of Israel at the UN Security Council on December 23, 2016 is a watershed moment in U.S.-UN relations – albeit not as President Obama hoped. Following the vote of fourteen in favor and one American abstention, Palestinian representative Riyadh Mansour and American Ambassador Samantha Power exchanged a telling handshake. Evidently, President Obama believes that he has put one over on Israel, Prime Minister Netanyahu and the incoming Trump administration. But here’s another possibility: treachery at the UN will not be cost free.
Let’s be absolutely clear about what has just happened. The Palestinians have completed the hijacking of every major UN institution. The 2016 General Assembly has adopted nineteen resolutions condemning Israel and nine critical of all other UN states combined. The 2016 Commission on the Status of Women adopted one resolution condemning Israel and zero on any other state. The 2016 UN Human Rights Council celebrated ten years of adopting more resolutions and decisions condemning Israel than any other place on earth. And now – to the applause of the assembled – the Palestinians can add the UN Security Council to their list.
Resolution sponsors Malaysia and New Zealand explained UN-think to the Council this way: Israeli settlements are “the single biggest threat to peace” and the “primary threat to the viability of the two-state solution.” Not seven decades of unremitting Arab terror and violent rejection of Jewish self-determination in the historic homeland of the Jewish people.
This is not just any lie. This is the big lie of modern antisemitism. This is the lie that drove a Palestinian teenager in June of this year to creep into the home of 13-year old Hallel Ariel and butcher her with a knife in the back as she slept in her bed.
The bed was located in the “settlement” of Kiryat Arba – on Arab-claimed territory whose ownership – by agreement – is subject to final status negotiations instead of back-stabbing UN resolutions. So to skip the UN-eze, today’s hate fest was diplomatic terrorism.
Obama’s failure to veto the resolution is at odds with long-standing American foreign policy that has insisted on peace through negotiations, and not UN-fiat, as the only way to ensure genuine and long-lasting recognition and cooperation. His excuse for throwing bipartisan wisdom overboard was delivered by Ambassador Power, in one of the most disingenuous statements in the history of American diplomacy.
Power began by likening Obama’s deed to Ronald Reagan’s treatment of Israel. She repeatedly claimed that the move was nothing new and “in line” with the past, though “historic” is how speaker-after-speaker and the President of the Council himself described it. She noted “Israel has been treated differently than other nations at the United Nations” and then doubled-down on more of the same. She complained that Council “members suddenly summon the will to act” when it comes to Israel, after the White House had actively pushed the frantic adoption of the resolution with less than 48 hours’ notice.
At its core, this UN move is a head-on assault on American democracy. President Obama knew full well he did not have Congressional support for the Iran deal, so he went straight to the Security Council first. Likewise, he knew that there would have been overwhelming Congressional opposition to this resolution, so he carefully planned his stealth attack.
He waited until Congress was not in session. Members of his administration made periodic suggestions that nothing had been decided. There were occasional head fakes that he was “leaning” against it. He produced smiling photo-ops from a Hawaiian golf course with no obvious major foreign policy moves minutes away. Holiday time-outs were in full-swing across the country. And then he pounced, giving Israel virtually no notice of his intent not to veto.
Profound betrayal of a true democratic friend of the United States is the only possible description.
Israel’s Ambassador Danny Danon held up a Bible in that sanctuary of idolatry and spoke of the holiday of Chanukah, about to commence this calendar year on Christmas Eve. He reminded his listeners that over two thousand years ago another King had banished the Jewish people from the Temple in Jerusalem, and tried to sever Jews from their religion and their heritage.
And he continued: “But we prevailed. The Jewish people fought back. We regained our independence and relit the Menorah candles…We overcame those decrees during the time of the Maccabees and we will overcome this evil decree today.”
The Security Council and President Obama leave a trail of devastation across the planet, with evil empowered and good forsaken. But their record does not have to be our future. Today’s vote reminds us of what it takes for evil to triumph.
Doing nothing is not an option for our new President and our incoming Congress. The time has come to undertake an urgent and full review of America’s relationship to the United Nations, and to suspend financial support until that review can identify how best to use American dollars in the interests of peace, security and human dignity. The perfidy of Barack Obama will not be the last word.


Anne Bayefsky is director of the Touro Institute on Human Rights and the Holocaust. Follow her on Twitter @AnneBayefsky.


http://www.foxnews.com/opinion/2016/12/24/diplomatic-terrorism-at-un-courtesy-president-obama.html?refresh=true)
Posted by Frances Rice at 10:32 AM