How Donald Trump Could Actually Win the Black Vote in 2020 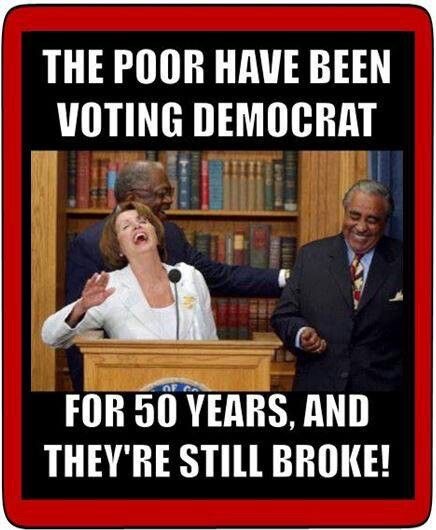 While Barack Obama is complaining about Russian hackers supposedly monkeying with the U.S. election—he's far more upset with Russia for that than for actually invading the Crimea—and Hillary Clinton is whining about "fake news" (not including her landing under fire in Bosnia), a real revolution is occurring under their noses here in the USA.


Donald Trump is rapidly becoming popular for getting things done. It's not just the booming stock market. Even Democrats are starting to like him or at least tolerate him ... well, some of them anyway.


In fact, this sea change is undoubtedly a large part of what's instigating the continued whining and complaining that could escalate soon enough into panic when Trump starts to break down the walls of the last bastion of the Democratic Party—identity politics—as he seems bent on doing.


A simple way exists to do just that, one that is a win-win for our minorities and for the America public. And that method would be aimed at all economically disadvantaged communities, not just African-American or Hispanic, because that would be racist and perpetuate identity politics, not end it, right?


As I said, the method is simple. Three to five trillion dollars—no one knows the exact total, but a huge amount of money—belonging to U.S. corporations sits overseas, avoiding onerous American corporate tax rates. Apple, as we know, has tons of it.  The Trump tax plan is to lower those corporate taxes from 35% (one of the highest in the world ) to 15% (among the lowest) to encourage companies to do business here. Good idea—or should we say at long last? There's also a plan being floated to charge 10% as a one-time incentive for the corporations to bring those trillions back to the USA straight away.


What if that 10% were only 5% or even 2%—if the money were guaranteed to be spent only on investing in our economically disadvantaged communities?


Imagine one trillion dollars or more coming home, pumping money everywhere from West Virginia to Ferguson to the Rust Belt to upstate New York, building factories, shopping malls, hospitals, recreational facilities, sports stadiums, all constructed and run by private corporations, not the government.
Those  corporations would have a vested interest in the success of their investments. Jobs would be coming out of the woodwork.  The life of those communities would change incrementally, but substantially, with the whole country benefitting as their standard of living rose. Bye-bye, Black Lives Matter with its reactionary race politics. Bye-bye, the drastic labor participation rate with ninety-five million Americans out of the work force (a decent part of that anyway). Bye-bye, homeless all over our big cities. Change, as they say, you could believe in.


Could Trump accomplish such a thing? Why not? Who would stop him? It wouldn't cost the taxpayers a penny. In fact, they'd make some. Could a Democratic senator vote against something like that?


Well, sure, they'll grouse and find fault, as will the media, but that would be easy to counteract, with or without Twitter. The truth, in this case, is too clear.
If Barack Obama had done something even approximating this, the editorial board of The New York Times would have had a collective orgasm and dedicated the next hundred issues to personal stories of all the good he had done—just like they did the "Neediest" around Christmas—and Time would have named Obama Person of the Decade... maybe the Century. One wonders why Obama didn't do something so obvious. Perhaps because lowering taxes isn't "fair."


Anyway, it's good that he didn't do it. It would have ended up completely a government program and nothing would have been "shovel ready" until 3006.
Trump's a businessman and knows if you want to get something done, you give it to private industry.  He's showing that in his cabinet picks, much to the dismay of the liberal cognoscenti who whine about too many billionaires oblivious to the fact that one of the biggest billionaires of all (George Soros) is underwriting practically everything they do.


So just do it, Donald. Bring that money back for the forgotten people. America will remember you for it—in 2020!