Our Responsibility to Criticize Islam


A commonplace has emerged among media and political elites that criticism of Islam or even of radical Islam will only serve to drive moderate Muslims into the radical camp.
That argument should be questioned because it can just as easily be that lack of criticism has led to the rebirth of militant Islam. Far from being critical of Islam, Western governments, media, academia, and even churches have bent over backward to claim that all the atrocities committed in the name of Islam have nothing to do with Islam. Indeed, the Western media have adopted a rigid system of self-censorship that keeps them from admitting that these atrocities are in fact committed in the name of Islam.
The latest example is the reporting on the assassination of a Russian ambassador by a Turkish policeman. Almost the first words out of the assassin’s mouth after the shooting were: “We are those who have given a pledge of allegiance to Muhammad that we will carry on jihad.” If you don’t remember him saying that, it’s because that part of the statement was omitted from almost all news and television reports. Apparently, our betters in the media were afraid that if we were aware of the man’s devotion to Muhammad, we might say something provocative that would turn untold numbers of peaceful Muslims into bomb-throwing jihadists.
Perhaps the prime example of the wages of silence is the current crisis in Europe. Islamic terrorists have declared war on Europe and the result has been a series of deadly attacks – at airports, subways, cafés, concert halls, and, most recently, Christmas markets. All this mayhem is the indirect result of ignorance about Islam – an ignorance that, in turn, is the result of an almost complete blackout of news unfavorable to Islam.
Anyone with a thorough understanding of Islamic culture and religion could have predicted that, even without the 2015-16 flood of Muslim migrants, the steady flow of Muslim immigrants over the years would create a combustible situation. The amazing thing is that the consequences of this massive migration were never discussed – except in glowing terms. Just about the only thing allowed to be said about the migrants was that they would solve labor shortages, refill welfare coffers, and bring cultural enrichment to Europe.
That was the official line. Anyone who deviated from it could expect censure, possible job loss, or even a criminal trial. Say something negative about Muslim immigration on your Facebook page and you would be visited by police. Say it in public and you would receive a court summons. It didn’t matter if you were a famous writer (Oriana Fallaci), the President of the Danish Free Press Society (Lars Hedegaard), or a popular member of the Dutch Parliament (Geert Wilders). If you couldn’t say something nice about Islam, then you shouldn’t say anything at all.
In the European case, the idea that criticizing Islam will create an army of radicals doesn’t hold up. Criticism of Islam is essentially a crime in many parts of Europe and has been for a long time. In Europe, few dared criticize Islam, but the radicals came anyway. More than anything else, it was silence that allowed Islamization and radicalization to spread through France, Germany, Belgium, the Netherlands, and Sweden.


Practically no one spoke up about no-go-zones, sharia courts, polygamy, and forced marriages, refusal to integrate, crime waves, and the rape epidemic. Now that many are finally beginning to speak out, it may be too late to avoid capitulation (Sweden’s likely fate) or bloody conflict (more likely in France).
The very argument that criticism of Islam will drive moderates into the radical camp suggests that criticism is needed. If Islam is such a hair-trigger religion that the slightest offense might radicalize adherents, there is something radically wrong with the religion itself. 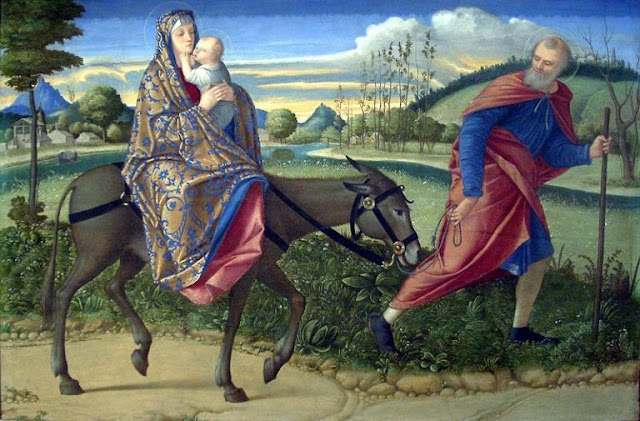 The Flight into Egypt by Vittore Carpaccio, c. 1515 [National Gallery, Washington, DC]
We don’t worry that criticizing Catholicism is going to produce angry Catholic mobs rampaging through the streets. We don’t fear that one wrong word is going to cause a young Southern Baptist to strap on a suicide belt.
Islam invites criticism. Given its bloody past and present, it would be highly irresponsible not to subject it to a searching analysis and critique. Such a critique would not aim at alienating Muslims (although some will inevitably be alienated), but at alerting likely victims of jihad.
One of the basics that non-Muslims need to know is that Islam divides the world in two – the House of Islam, and the House of War (all non-Islamic societies). And every Muslim is expected to do his part to make the House of War submit to the House of Islam. Europeans are now experiencing a “don’t-know-what-hit-me” sense of bewilderment because they never learned this basic fact about Islam.
One reason for our reluctance to analyze and criticize Islam (an idea) is that such criticism seems tantamount to criticizing Muslims (a people). Unfortunately, even if that is not the intention, it is often the result. A person can’t separate himself entirely from his beliefs, and, consequently, we take criticism of our religion personally. That’s a good reason for presenting the critique as tactfully as possible. But it’s not a good reason for offering no critique at all.
If you can’t criticize a belief system because it would hurt the feelings of people who subscribe to that system, then we were wrong to criticize Nazism, Communism, and Japanese imperialism. Ordinarily, we refrain from criticizing other religions. Such a live-and-let-live approach is generally sensible, but when the other religion takes the attitude that you must either convert, submit, or die, then live-and-let-live is no longer an option. That is the position that we are in with regard to Islam. And it is suicidal to pretend that things are otherwise.


William Kilpatrick is the author of Christianity, Islam and Atheism: The Struggle for the Soul of the West, and a new book, The Politically Incorrect Guide to Jihad. For more on his work and writings, visit his website, The Turning Point Project
https://www.thecatholicthing.org/2016/12/28/our-responsibility-to-criticize-islam/
Posted by Frances Rice at 10:56 PM