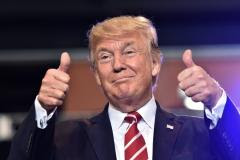 President Donald Trump frequently points to the strong economy as one of his major accomplishments, and today's employment summary gives him more bragging rights:

The Labor Department's Bureau of Labor Statistics says the economy added a whopping 266,000 jobs in November; and for the sixth month in a row, a record number of Americans were counted as employed.

The unemployment rate dropped a tenth of a point to 3.5 percent, a 50-year low.

In November, the civilian non-institutional population in the United States was 260,020,000. That included all people 16 and older who did not live in an institution (such as a prison, nursing home or long-term care facility).

Of that civilian non-institutional population, 164,404,000 were participating in the labor force, meaning that they either had a job or were actively seeking one during the last month. This resulted in a labor force participation rate of 63.2 percent.

The labor force participation rate has never been higher than 67.3 percent, a level achieved in the early months of 2000. The Trump-era high was set last month at 63.3 percent. Economists say retiring baby boomers account for some of the decline since the turn of the century.

In November, notable job gains occurred in health care and in professional and technical services. Employment also increased in manufacturing, reflecting the return of workers from a strike. Employment continued to trend up in leisure and hospitality, transportation and warehousing, and financial activities, while mining lost jobs.

In a report released three days ago, the Bureau of Labor Statistics said a total of 166.4 million people, or 64.4 percent of the civilian noninstitutional population, age 16 and over, worked at some point during 2018.

The number of people who experienced some unemployment during 2018 declined by 1.3 million to 13.2 million.

The data derives from information collected in the Annual Social and Economic Supplement to the Current Population Survey, which is conducted monthly by the U.S. Census Bureau.

BLS notes the following highlights from the 2018 data:

-- The proportion of workers who worked full time, year-round in 2018 was 70.4 percent, up 0.9 percentage point from the prior year.

The business and economic reporting of CNSNews.com is funded in part with a gift made in memory of Dr. Keith C. Wold.