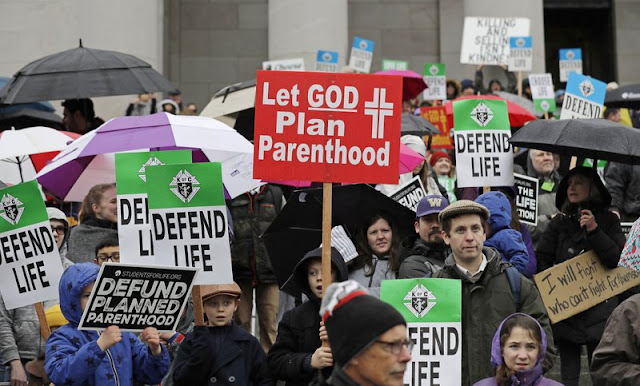 NEW YORK (AP) — When Donald Trump assumed the presidency, conservative religious leaders drew up “wish lists’ of steps they hoped he’d take to oppose abortion and rein in the LGBTQ-rights movement. With a flurry of recent actions, Trump’s administration is now winning their praise for aggressively fulfilling many of their goals.

Mat Staver, president of the legal advocacy organization Liberty Counsel, said Trump has fulfilled about 90% of the goals on a list that Staver and other conservative leaders compiled.

“In the first two years of his administration, he’s achieved more than all of the presidents combined since Ronald Reagan,” Staver said. “He’s been the most pro-religious freedom and pro-life president in modern history.”

One of the most dramatic steps — hailed by conservatives and decried by liberals — came this week when the Department of Health and Human Services implemented a new rule for the federal family planning program known as Title X. Planned Parenthood, long a target of religious conservatives because of its role as the leading U.S. abortion provider, quit the program — walking away from tens of millions of dollars in grants — rather than comply with a new rule prohibiting clinics from referring women for abortions.

Last week, the Labor Department proposed a rule that is expected to shield federal contractors from discrimination complaints regarding hiring and firing decisions motivated by religious beliefs. Critics say the rule, if implemented, would enable employers to discriminate against LGBTQ people.

On Friday, the Justice Department filed a brief telling the Supreme Court that federal law allows firing workers for being transgender. The brief is related to three cases that the high court will hear in its upcoming term related to LGBTQ discrimination in the workplace.

These and other actions aimed at curtailing abortion rights and LGBTQ rights have helped many conservative Christians overlook other aspects of Trump’s presidency, such as his often-divisive rhetoric on Twitter and at rallies.

The Rev. Robert Jeffress, pastor of the Southern Baptist megachurch First Baptist Dallas and a frequent guest at the White House, predicted that Trump would win more evangelical votes in 2020 than he did in 2016, when they helped provide his margin of victory.

“When he ran in 2016 and promised pro-life, pro-religious freedom policies, most evangelicals who voted for him didn’t know whether he would or could fulfill those promises,” Jeffress said. “When they look back now, they see he checked off all of those goals. ... He’ll win by an even larger margin on basis of promises kept.”

The same phenomenon being celebrated by religious conservatives is viewed with alarm by liberal activists.

For the religious right, “Every day is Christmas,” said Rachel Laser, president & CEO of Americans United for Separation of Church and State. She worries that the mantra of “religious freedom” is being used to protect some Americans while hurting others.

The American Civil Liberties Union is among several organizations seeking to block some of the administration’s moves in court.

“This is essentially the wish list of groups that have a very extreme and discriminatory perspective on what religious liberty means,” said Ian Thompson, the ACLU’s senior legislative representative in Washington.

“It’s important not to see any one of these policies in isolation but to see them as part of a coordinated effort by the administration across agencies,” Thompson said. He urged the Democratic-controlled House of Representatives to go on record against the policies, and investigate those which seem particularly problematic.

From both the right and left, activists noted that Trump’s numerous appointments of federal judges have been welcomed by the religious right as a potential long-term boost to its causes.

“We are heartened by the appointment of constitutionalist judges, including two excellent Supreme Court justices (Neil Gorsuch and Brett Kavanaugh), and look forward to more such appointments throughout the federal court system,” said Bruce Hausknecht, judicial analyst for Focus on the Family.

Peter Montgomery of People for the American Way, which is often critical of religious conservative groups, said their Trump-supported agenda “is bad news for women in the U.S. and around the world, for LGBTQ people, and for the principle that taxpayer money should not be used to fund discrimination.”

“Trump is advancing religious right priorities in the short term through administrative actions and in the long term through his appointment of young, right-wing ideologues to lifetime positions on the federal judiciary,” Montgomery added in an email.

The Trump administration actions represent a sharp turnaround from the presidency of Barack Obama, who supported abortion rights and same-sex marriage, mandated that contraception be covered by the Affordable Care Act, enabled transgender people to serve openly in the military, and issued guidance to school districts that they should let transgender students use the bathrooms of their choice.

Alliance Defending Freedom is among the conservative legal groups that has litigated against numerous Obama-era initiatives and has welcomed Trump’s moves to reverse them.

“The defense of life, free speech, and religious liberty should never be subject to political and cultural whims,” said Kristen Waggoner, an ADF senior vice president. “They are constitutional guarantees, and we are grateful that this administration recognizes that reality and is taking serious steps to correct injustice and protect all Americans.”