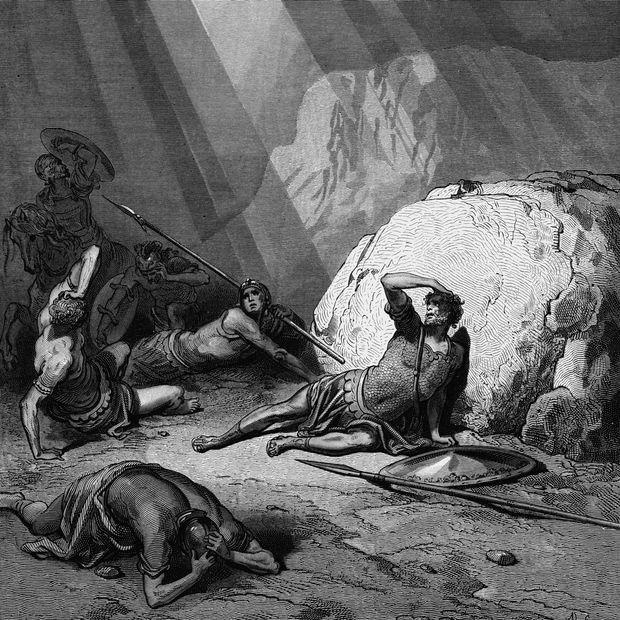 When Saul of Tarsus set out on his journey to Damascus the whole of the known world lay in bondage. There was one state, and it was Rome. There was one master for it all, and he was Tiberius Caesar.

But everywhere there was something else, too. There was oppression—for those who were not the friends of Tiberius Caesar. There was the tax gatherer to take the grain from the fields and the flax from the spindle to feed the legions or to fill the hungry treasury from which divine Caesar gave largess to the people. There was the impressor to find recruits for the circuses. There were executioners to quiet those whom the Emperor proscribed. What was a man for but to serve Caesar?

There was the persecution of men who dared think differently, who heard strange voices or read strange manuscripts. There was enslavement of men whose tribes came not from Rome, disdain for those who did not have the familiar visage. And most of all, there was everywhere a contempt for human life. What, to the strong, was one man more or less in a crowded world?

Then, of a sudden, there was a light in the world, and a man from Galilee saying, Render unto Caesar the things which are Caesar’s and unto God the things that are God’s.

And the voice from Galilee, which would defy Caesar, offered a new Kingdom in which each man could walk upright and bow to none but his God. Inasmuch as ye have done it unto one of the least of these my brethren, ye have done it unto me. And he sent this gospel of the Kingdom of Man into the uttermost ends of the earth.

So the light came into the world and the men who lived in darkness were afraid, and they tried to lower a curtain so that man would still believe salvation lay with the leaders.

But it came to pass for a while in divers places that the truth did set man free, although the men of darkness were offended and they tried to put out the light. The voice said, Haste ye. Walk while you have the light, lest darkness come upon you, for he that walketh in darkness knoweth not whither he goeth.

Along the road to Damascus the light shone brightly. But afterward Paul of Tarsus, too, was sore afraid. He feared that other Caesars, other prophets, might one day persuade men that man was nothing save a servant unto them, that men might yield up their birthright from God for pottage and walk no more in freedom.

Then might it come to pass that darkness would settle again over the lands and there would be a burning of books and men would think only of what they should eat and what they should wear, and would give heed only to new Caesars and to false prophets. Then might it come to pass that men would not look upward to see even a winter’s star in the East, and once more, there would be no light at all in the darkness.

And so Paul, the apostle of the Son of Man, spoke to his brethren, the Galatians, the words he would have us remember afterward in each of the years of his Lord:

Stand fast therefore in the liberty wherewith Christ has made us free and be not entangled again with the yoke of bondage.

One Christmas Eve during the Cold War 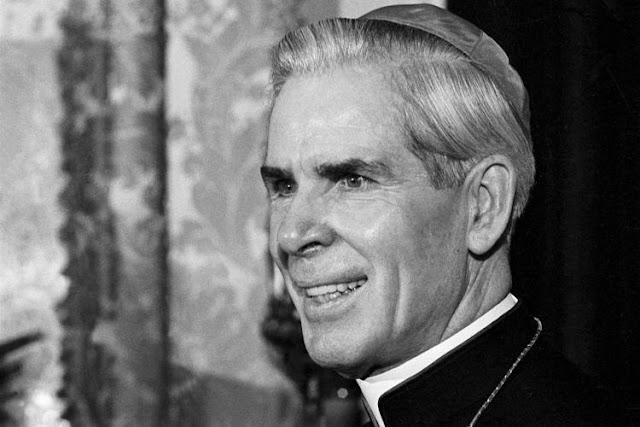 This Oct. 26, 1966 file photo shows Bishop Fulton J. Sheen in his office at the Propagation of Faith in New York. Eddie Adams

“This Christmas let us all remember, America has been a shining star like the one that guided Mary and Joseph to Bethlehem our first Christmas Eve. Like our redeemer, America was the one chosen to Shepard the world. America was God’s gift to protect religious freedom.”
– Bishop Fulton Sheen

Bishop Fulton Sheen was a Catholic Bishop, writer, teacher, theologian and syndicated radio and television evangelist. He had PhDs in Cannon Law, Philosophy, and Theology. He wrote more than 200 books and had a syndicated news column. He won two Emmy Awards for his TV shows, and was featured on the covers of TV Guide, Colliers, Look, and Time magazine. He shared views with American presidents frequently on the importance of faith in society. Although his theological resume is impressive, he is best known for his distain for socialism and communism and his ability to unite Americans of all faiths in their fight to protect liberty during the dark days of the Cold War.

Bishop Sheen was not a typical TV evangelist. Clerics from every faith admired his ability to bring unity to Judeo-Christians and convince them to pray collectively to protect America from the evils of socialism and communism. He believed faith was the greatest distinction between freedom and communist oppression. He once told viewers that communist leaders “Malenkov, Vyshinsky, Beria and, Stalin will be punished unmercifully by God someday for the sins they’ve committed against mankind and the Lord." Joseph Stalin suffered a stroke a few days later and died the next week.

One Christmas Eve during the Cold War, tension between the Soviets and America was so severe, America feared a nuclear attack. Bishop Sheen opened his weekly show that holy night planning to talk about the miracle of the Immaculate Conception. He wanted to remind viewers the Lord had a master plan for every man, woman and child on this earth to enter His kingdom and spend eternity with Him. When He sent Mary and Joseph to Bethlehem on Christmas Eve the night of our Savior’s birth, He sent a message to us: “He opened heaven’s gates for everyone of every faith that night.”

As Sheen peered into the faces of his audience that night, he sensed fear and anxiety in the studio. The Bishop had an uncanny ability to annotate his message. Realizing their concerns that Russia and China might form a super power to avenge U.S. involvement in the Korean War, he knew he must resonate a message that restored peace within them. With his disarmingly hypnotic gaze he counseled them: “This holy night we must have faith in America. It is the sacred place God created for every faith to share the blessings of freedom. It is a shelter for world peace. It might not seem it is tonight, but it is God’s will. And tomorrow His birthday present to us will be eternal world peace.”

He efficaciously continued, “Politics is the devil’s instrument that fosters hatred and discord among men to divide them into factions to destroy their faith in God.” He said America has proven it is above that. America set an example for the world. Our freedom is built on faith not on politics. That is why we will survive all attacks by any governments that don’t believe in God or the rights of man. America will lead the way using its strength and valorousness to stop assaults upon their theater of faith. We must keep faith in our leaders and pray for them. Sheen cautioned the audience, “If we ever permit politics to disrupt our faith and unity we’ll lose the ability to protect America.”

As Bishop Sheen continued, he felt the chilling trepidation and consternation of his audience melt into a warming calm of serenity and faith in their leaders to defend them. But he continued to stress that they must never forget: “America is great because God made her so.” And he assured them it was our founders’ faith in God that gifted them with the wisdom to blueprint the American Republic. He insisted the one unifying element of the American experiment was freedom of religion. And that alone would always be our saving grace. He told his audience, “Everyday Americans pray to their Lord. And no matter what words they use, the spirit of every prayer is the same: It is their faith and trust in God that keeps us united and brings us peace.” He cautioned them to never stop praying.

Bishop Sheen reminded viewers that Christmas that America must never suffer from “over-tolerance.” He told them not to believe the things they read in newspapers or hear on the radio or see on TV, that we are spending too much money on the military. Or that in a nuclear attack, ground troops will be worthless. This doctrine of tolerance is the devil’s way to fight God’s virtues. The devil is using them to convince America if they are more “broadminded towards socialism and communism, it will bring world peace.”

Bishop Sheen concluded his show that Christmas Eve with this admonition. “As Christians, Jews and people of all faiths celebrate Christmas in their own traditional way, let us never forget that God made America great because he created her as the protector of the world. As Jews light another Menorah and as each Christian makes the sign of the cross, let us all pray that the New Year will usher in a tide of new faith that will continue to unite us to protect world freedom. God bless you.”

"Life is Worth Living" and "The Fulton Sheen Show" aired on the DuMont TV and ABC networks and was in weekly syndication from 1955 to 1968. Sheen had the only show able to outdraw "The Milton Berle Show" in that time slot. When Berle heard this he said, referencing his sponsor Texaco, “We both work for the same boss, Sky Chief.” The following year, as Bishop Sheen accepted his Emmy Award, Berle quipped, "Well, he's got better writers, Matthew, Mark, Luke and John!" Martin Sheen, who grew up watching Bishop Sheen, adopted his name when he started his stage career. Bishop Sheen has been beatified by the Catholic Church and is now being considered for canonization as a saint.

Bishop Fulton Sheen blazed the pathway for many other prominent religious figures to correlate the role of religion in protecting world peace. As a result of this, a religious and cultural upheaval swept America in the 1950s. It forever united America’s religious and cultural beliefs. This spiritual rebirth fostered a renewed American patriotism and our ability to superintend future global tensions. The importance of free world political leaders often over-shadows the humble efforts of Bishop Sheen, Rev. Billy Graham, Dr. Norman Vincent Peale, Jerry Falwell, Charles Fuller along with the countless other brave clerics who helped defeat the threat of European Communism and the Eastern Block.

Bishop Sheen told us, “America’s greatest asset is faith and unity.” At a time our nation is facing its worst internal political divide in our young history, Christmas gives us an opportunity to reflect upon the words Bishop Sheen used to comfort his fearful audience on that Christmas Eve in the darkest days of the Cold War: “Politics is the devil’s instrument that fosters hatred and discord among men to divide them.” Maybe for one day we can set aside our politics in the name of American unity and count our blessings in recognition of the powerful gift of freedom that our Savior blessed us with?

“One of the first orders Stalin issued was to ban all prayer because the people were praying to God to deliver them from ‘the wickedness and snares of the devil.’ When party members asked Stalin why he issued such an order he replied: Because, we are those devils."
– Bishop Fulton Sheen