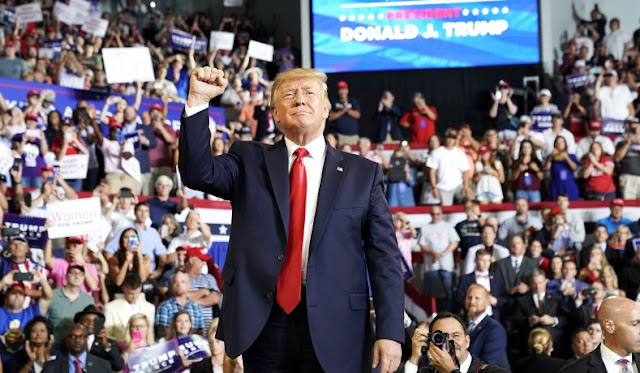 Americans saw plenty of Washington at its worst this year, with one party in Congress obsessed with a partisan impeachment stunt and obstructing progress at every turn. But despite getting no help from the far left, America today is soaring to new heights.

WATCH: “Our best days are yet to come!”


It’s tough to pick only 10 accomplishments from such an extraordinary year, but here are just a few of the biggest things President Donald J. Trump has gotten done for the American people in 2019:

1.   The Trump Boom is going strong. The unemployment rate recently hit its lowest mark in 50 years. All told, since President Trump’s election, our economy has added more than 7 million jobs—over half a million in manufacturing alone.

3.   The working class is thriving, as are previously forgotten communities. Wages are now rising the fastest for low-income workers, and poverty rates for African Americans and Hispanic Americans have reached all-time lows.

4.   Accountable government is back. Since taking office, President Trump has rolled back nearly 8 regulations for every new one, saving American taxpayers more than $50 billion in the process—with bigger savings still to come.

6.   Trade with China in particular is about to get a whole lot fairer. As part of a historic “phase 1” deal, Beijing has agreed to structural reforms in its trade practices and to make substantial purchases of American agricultural products.

7.   Securing the border is paying off and making our country safer. President Trump struck new agreements with Mexico and Central American countries this year to help stop the flood of illegal immigration. Thanks to this swift action, border apprehensions fell by more than 70 percent from May to November.

8.   On health care, President Trump is fighting to give our patients the best system on Earth. While Democrats try to take away choice, the President’s focus on affordability led to the largest year-over-year drop in drug prices ever recorded.

9.   American interests are taking center stage abroad. In just one example: After years of not paying their fair share, NATO Allies will have increased defense spending by $130 billion by the end of next year.

10.    Our great military took out the world’s top terrorist in October. (Meet Conan, the hero dog who helped them do it!) Our troops are now getting the support they deserve. President Trump recently signed the National Defense Authorization Act for the 2020 fiscal year, which includes the biggest pay raise for our military in a decade.

On behalf of President Trump and his entire Administration, have a blessed and wonderful New Year!