Democratic Law Professor: It Is Wrong to Impeach Trump Just Because You're All Mad 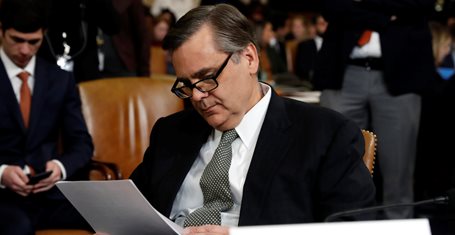 Speaking during a House Judiciary Committee hearing Wednesday morning, George Washington University Law Professor Jonathan Turley called out Democrats and fellow members of the panel for moving forward with impeachment because "everyone is mad."

“I get it. You're mad. The president's mad. My Republican friends are mad. My Democratic friends are mad. My wife is mad. My kids are mad. Even my dog seems mad and Luna is a golden-doodle and they don't get mad. So, we're all mad. Where has it taken us? Will a slipshod impeachment make us less mad or will it only give an invitation for the madness to follow in every future administration? That is why this is wrong...it's wrong because this is not how you impeach an American president," Turley argued, adding that the evidence Democrats are using is severely lacking, the process is rushed and that a number of witnesses haven't been subpoenaed.

"I am concerned about lowering impeachment standards to fit a paucity of evidence and an abundance of anger. If the House proceeds solely on the Ukrainian allegations, this impeachment would stand out among modern impeachments as the shortest proceeding, with the thinnest evidentiary record, and the narrowest grounds ever used to impeach a president. That does not bode well for future presidents who are working in a country often sharply and, at times, bitterly divided,” he said.

And by the way, Turley isn't a Republican and voted against President Trump in 2016.

“I'm not a supporter of President Trump. I voted against him. My personal and political views of President Trump are irrelevant to my impeachment testimony, as they should be to your impeachment vote," he continued. “As I have previously written, such misuses of impeachment would convert our process into a type of no-confidence vote of Parliament. Impeachment has become an impulse buy item.