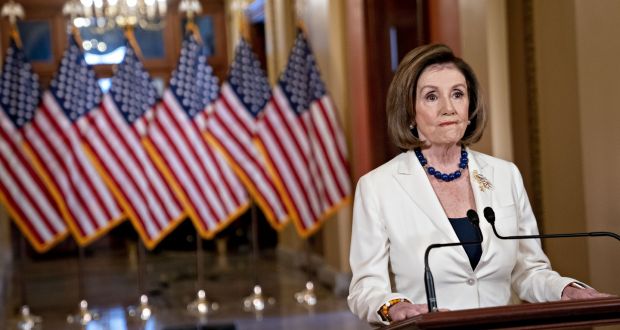 Speaker Nancy Pelosi’s announcement to proceed with articles of impeachment directly contradicts the will of the American people and has consequently put Republicans in the strongest possible position to take back the House in 2020.

Today’s comments cement the fact that impeaching President Donald Trump has been the goal of Speaker Pelosi, as well as Representatives Adam Schiff, Jerry Nadler, and House Democrats since the 2016 election.

This impeachment sham is purely political which is why Democrats are rushing the process and putting key legislative items like the USMCA and lowering prescription drug pricing on the back burner.

Democrats are moving forward with articles of impeachment despite having any impeachable evidence.

·       The July 25th call transcript – released to the public – shows no evidence of pressure, no quid pro quo.

·        Both President Zelensky and President Trump have said there was no pressure on the call.

·        At the time of the July 25th call, the Ukrainian government did not know aid was withheld.

Democrats know the hearings were a total bust which is why Steny Hoyer - Pelosi’s number 2 – said the Russia investigation was basis for impeaching President Trump.

President Trump was fully exonerated in the Mueller Report.

Democrats keep moving the goal post because they have nothing.

As the President said, let’s quickly move forward with impeachment in the House so there can be a fair trial in the Senate and Congress can get back to the business of the American people.

The abuse of power by Nancy Pelosi and her House Democrat colleagues to pursue this sham impeachment is even more reason why Republicans must take back the House and re-elect President Trump in 2020.

Another sham hearing and still no evidence that merits an impeachable offense.

As Professor Jonathan Turley said, this would be the first impeachment in history with no established crime. Democrats have failed to prove this impeachment is not just based on politics.

Three of the witnesses have anti-Trump bias and have long supported impeachment.

·        Noah Feldman is an anti-Trump Democrat and a Harvard Law professor who has been pushing for President Trump’s impeachment since 2017.

·        Michael Gerhardt is a registered Democrat and a University of North Carolina School of Law professor.

None of the witnesses were present on the July 25th call.

One unhinged “witness” – Pamela Karlan - delivered an obviously rehearsed line where she invoked a 13-year old kid’s name in a vile attempt to score political points against President Trump.

It’s clear that Adam Schiff, Jerry Nadler, and House Democrats refuse to accept the results of the 2016 election. Since the President was elected, they have been focused on overturning the votes of 63 million Americans.

Jerry Nadler has long called for impeachment and has called the President “illegitimate.”

Even many in the mainstream media realized that the hearing did not go well for Democrats and will do little to sway public opinion.

·        Both President Zelensky and President Trump have said there was no pressure on the call.

·        At the time of the July 25th call, the Ukrainian government did not know aid was withheld.

Democrats have already made up their minds and support impeachment regardless of the facts.

Polls are continuing to show Democrats’ impeachment inquiry is losing steam.
Many House Democrats in Trump won Congressional Districts came to Washington pledging to work with President Trump and Republicans. They will have to answer to their constituents in November 2020.

The RNC is continuing to hold these Democrats accountable. Visit: www.stopthemadness.com

Democrats need to get back to the issues that matter most to the American people including ratifying the USMCA.

It’s been one year since the USMCA was signed by President Trump. Now, it sits on Nancy Pelosi’s desk collecting dust.

Information complied by the RNC.
Posted by Frances Rice at 3:02 PM