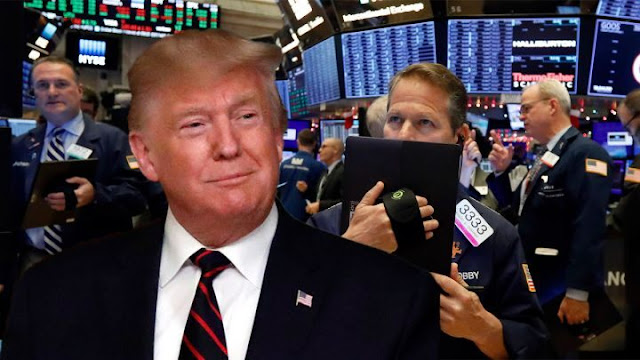 The stock market has been unstoppable under the influence of President Trump.

“The rally has been driven by pro-growth measures, de-escalation of trade tensions, huge liquidity injections by central banks and a FOMO approach by investors worried about missing out on a remarkable U.S. market outperformance that has set one record high after the other.” Mohamed El-Arian, chief economic adviser at Allianz, told FOX Business.

The gains show why U.S. markets have become the envy of the world under Trump, who has followed through on his promises of cutting taxes and regulations and rewriting global trade deals in America's favor.

By comparison, global exchanges such as Hong Kong’s Hang Seng and Britain’s FTSE have gained 20.4 percent and 6.4 percent, respectively, since Trump’s election win, while China’s Shanghai Composite has lost 7.2 percent, according to Dow Jones Market Data Group. Of the major global averages, only Japan’s Nikkei, up 44.1 percent, has come close to the gains of the U.S. markets.

U.S. investors' holdings have benefited from Trump’s pro-business agenda. He has lowered income tax rates for individuals, cut corporate taxes and rolled back a number of regulations, including restrictions on the country’s biggest banks.

Trump also negotiated the United States-Mexico-Canada Agreement, which overhauls the Clinton-era North American Free Trade Agreement, commonly known as NAFTA, and has embarked on a nearly 21-month-long trade war against China, which he says has “been taking advantage” of the U.S. for years.

This week, Democrats in the House backed the USMCA after months of negotiation, and an initial trade deal with China was reached. Both deals are expected to provide a tailwind for a stock market, and an economy, that have been on fire in the past four months.

The Dow Jones index, for instance, has gained 11.2 percent since bottoming out on Aug. 14.

David Kostin, chief US equity strategist at Goldman Sachs, thinks the stock market’s recent success suggests “the pace of U.S. economic growth will improve in the near future.”

His team points to Fed rate cuts along with the bottoming of the inventory cycle as reasons, in addition to the easing of trade tensions with China.