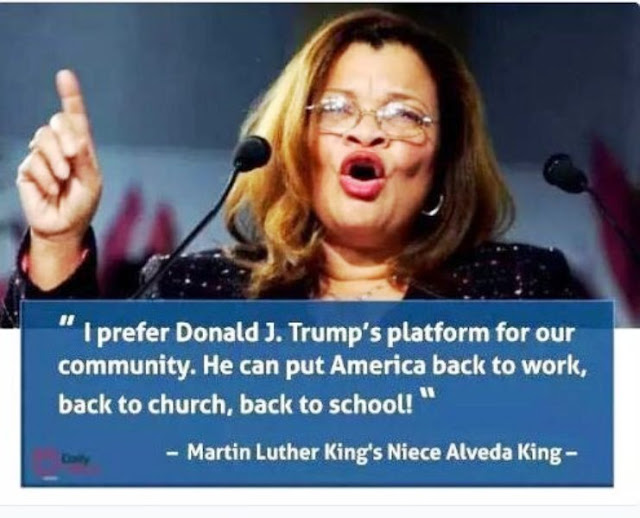 Donald Trump called for a “new deal for black America” in a Wednesday afternoon address, as he works to bridge the gap he faces with the crucial voting bloc less than two weeks from Election Day.
Speaking in Charlotte, N.C., the GOP nominee criticized years of Democratic rule for leaving black America behind, and outlined his plan to help.
My “deal is grounded in three promises: safe communities, great education, and high-paying jobs,” Trump said.
“Whether you vote for me or not, I will be your greatest champion. We live in a very divided country and I will be your greatest champion.”
Trump called on voters to repudiate Hillary Clinton and the Democrats in favor of change.
“American politics is caught in a time loop, we keep electing the same people over and over and over,” he said.
“Every day, I’m out on the trail proposing fresh solutions and new thinking. And every day, the same people, getting rich off our broken system, say we can’t change and we can’t try anything new, because it’s not good for them.”
“I have a message for all the doubters in Washington: America’s future belongs to the dreamers, not the cynics and not the critics," he said.
“African-American citizens have sacrificed so much for our nation. They fought and died in every war since the Revolution and from the pews and the picket lines, they’ve lifted up the conscience of our country in the long march for civil rights. Yet too many African-Americans have been left behind.”
Trump called for incentives to move companies into blighted neighborhoods to bolster employment, help African-Americans get better access to credit and push cities to declare “blighted communities” disaster areas to help rebuild infrastructure.
He also said he'd support increasing the number of police officers in such areas, connecting a lack of officers to a rise in murder rate in major cities.
But while Trump’s call focused on removing “gang-members and criminal cartels,” he blamed Clinton for promoting a "war on police.” He did not mention the accusations of police brutality by minorities who feel that they are disproportionately targeted.
It’s not the first time Trump has made a direct appeal to black voters -- overtures first appeared in scripted speeches in the late summer.
To view the entire article, click here.
Posted by Frances Rice at 3:40 PM