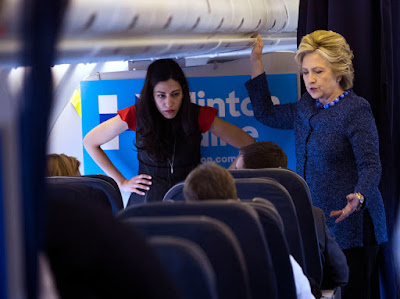 It appears there may be more to why Hillary Clinton’s campaign vice-chair has been absent from the trail of late.

Following the FBI’s bombshell discovery of thousands of new documents deemed pertinent to their criminal investigation of Clinton’s email server, two new reports are raising serious questions about whether her longtime aide, Huma Abedin, perjured herself.


The Daily Beast is reporting that these new documents appear to directly contradict testimony Abedin gave in a court-ordered deposition regarding Clinton’s server:


But the new information that the FBI found State Department-related email on her home laptop also calls into question whether Abedin in fact turned over all of the devices she used to send and receive email while working at State. On June 28, 2016, Abedin said under oath in a sworn deposition that she looked for all devices that she thought contained government work on them so the records could be given to the State Department. (These records were subsequently reviewed by the FBI.)


And as the Associated Press also reports, Abedin signed a State Department document attesting under penalty of perjury that she did not retain any “classified or administratively controlled documents and materials” upon her departure from Foggy Bottom:


Abedin's testimony in the civil suit was complicated by a routine State Department document she signed under penalty of perjury in February 2013. She promised she would "turn over all classified or administratively controlled documents and materials" before she left her government job, and promised that she was not retaining copies, "including any diaries, memorandums of conversation or other documents of a personal nature." The document required her to give back all "unclassified documents and papers relating to the official business of the government acquired by me while in the employ of the department."


As the Daily Beast notes in its report, “Abedin is not simply a close aide, she’s a critical member of Hillary Clinton’s tiny inner circle that protects and — at times — enables the deeply flawed and secretive Democratic nominee.”
This development surrounding someone who would certainly inhabit a West Wing office were Clinton to win is a troubling reminder of the above-the-law mentality Clinton and her inner circle operate with when they are in positions of power.
With the race tightening, how long will Hillary Clinton continue to stand behind her?
Posted by Frances Rice at 10:21 AM