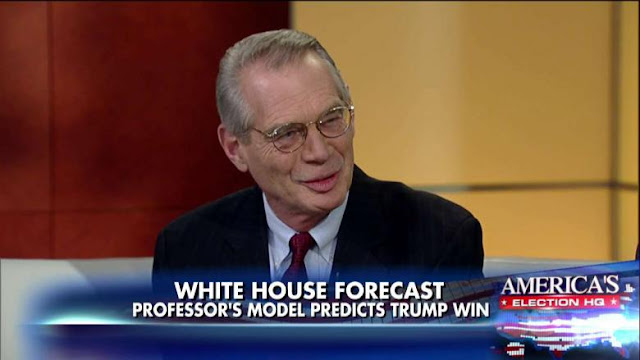 
By Paul Joseph Watson - October 24, 2016
Political science professor Helmut Norpoth, who has accurately called the results of the last five presidential elections, still asserts that Donald Trump has an 87% chance of defeating Hillary Clinton despite Clinton being ahead in the polls.
Norpoth’s model has correctly predicted the outcome of the popular vote for every election since 1996, including the 2000 race where Al Gore won the popular vote but George W. Bush took the presidency.
“It usually turns out that the candidate who does better in his party’s primary beats the other guy who does less well,” said Norpoth, adding that Trump’s margin of victory in New Hampshire and South Carolina compared to Clinton (who lost in New Hampshire) was crucial to his model.
The other factor is the “swing of the pendulum,” which makes it far more likely for a change of government if one party has been in power for two terms.
Norpoth said he has gone “all in” on a Donald Trump victory and is sticking with his bet.
“There are also quite a few colleagues of mine who have a prediction that Trump is going to make it,” added the professor.
Many Trump supporters are now claiming that the media narrative that the election result is a foregone conclusion is a trick designed to convince potential Trump voters to stay home on November 8.
A confidential memo allegedly obtained from Correct The Record, a Democratic Super PAC, reveals a plan to “barrage” voters with high frequency polls that show Hillary ahead in order to “declare election over,” while avoiding any mention of the Brexit vote (which completely contradicted polls that said Brexit would fail).
Emails revealed by Wikileaks show how Democratic operatives planned to encourage “oversamples for polling” in order to “maximize what we get out of our media polling.” In other words, sample more Democrats than Republicans in order to make people believe that Hillary’s lead is far greater than the reality of a tight race.
Norpoth’s forecast of a Trump victory mirrors what’s taking place in the betting markets, with British bookmakers William Hill revealing last week that 65% of all bets on the market have backed Trump to win the election, a similar phenomenon to what happened before the Brexit vote, where the polls were proven completely wrong.


http://www.infowars.com/professor-who-predicted-last-five-elections-says-trump-has-87-chance-of-winning/
Posted by Frances Rice at 11:52 AM