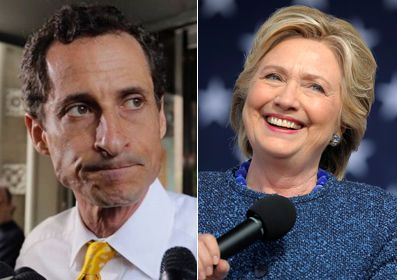 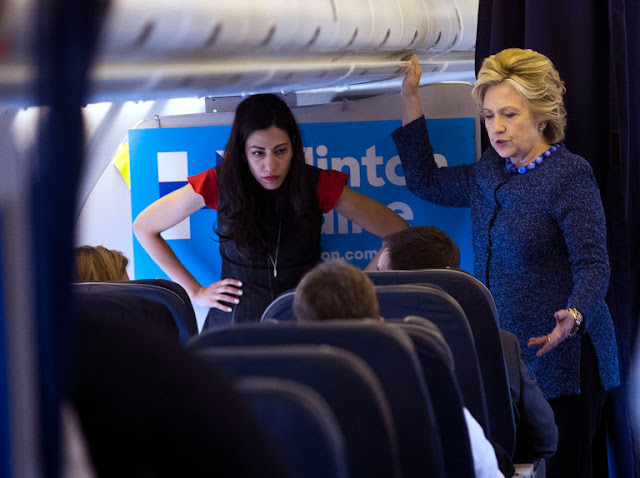 Huma Abedin and Hillary Clinton on the campaign’s plane on Friday. Credit Doug Mills/The New York Times
WASHINGTON — Federal law enforcement officials said Friday that the new emails uncovered in the closed investigation into Hillary Clinton’s use of a private email server were discovered after the F.B.I. seized electronic devices belonging to Huma Abedin, a top aide to Mrs. Clinton, and her husband, Anthony D. Weiner.
The F.B.I. is investigating illicit text messages that Mr. Weiner sent to a 15-year-old girl in North Carolina. The bureau told Congress on Friday that it had uncovered new emails related to the Clinton case — one federal official said they numbered in the thousands — potentially reigniting an issue that has weighed on the presidential campaign and offering a lifeline to Donald J. Trump less than two weeks before the election.
In a letter to Congress, the F.B.I. director, James B. Comey, said that emails had surfaced in an unrelated case, and that they “appear to be pertinent to the investigation.”
Mr. Comey said the F.B.I. was taking steps to “determine whether they contain classified information, as well as to assess their importance to our investigation.” He said he did not know how long it would take to review the emails, or whether the new information was significant.

Document: Letter to Congress From F.B.I. Director on Clinton Email Case
Mr. Trump has fallen behind Mrs. Clinton in most national polls and in many key states. Polls have been tightening in recent days, however, amid the daily release of hacked Clinton campaign emails published by WikiLeaks.
Mr. Trump seized on the F.B.I. action on Friday at a rally in New Hampshire. To cheers of “lock her up” from his supporters, Mr. Trump said: “Hillary Clinton’s corruption is on a scale we have never seen before. We must not let her take her criminal scheme into the Oval Office.”
After deriding the F.B.I. for weeks as inept and corrupt, Mr. Trump went on to praise the law enforcement agency.
“I have great respect for the fact that the F.B.I. and the D.O.J. are now willing to have the courage to right the horrible mistake that they made,” Mr. Trump said, referring also to the Department of Justice. “This was a grave miscarriage of justice that the American people fully understand. It is everybody’s hope that it is about to be corrected.”
The Clinton campaign called on Mr. Comey to provide information beyond what was put forth in the letter. of Form
“Director Comey’s letter refers to emails that have come to light in an unrelated case, but we have no idea what those emails are and the director himself notes they may not even be significant,” said John D. Podesta, chairman of Mrs. Clinton’s campaign.
He added: “It is extraordinary that we would see something like this just 11 days out from a presidential election.”
Mrs. Clinton, arriving Friday in Cedar Rapids, Iowa, waved at members of the media gathered on the tarmac but ignored shouted questions.
The Republican National Committee cheered the new attention on Mrs. Clinton’s emails as a potential turning point in the race.
“The F.B.I.’s decision to reopen their criminal investigation into Hillary Clinton’s secret email server just 11 days before the election shows how serious this discovery must be,” Reince Priebus, the Republican committee chairman, said in a statement. “This stunning development raises serious questions about what records may not have been turned over and why, and whether they show intent to violate the law.”
In September, Mr. Comey announced that the F.B.I. had closed the investigation after determining that no one should face criminal charges. But Mr. Comey did criticize Mrs. Clinton and her aides for what he termed the “extremely careless” handling of sensitive information.
Continue reading the main story
Posted by Frances Rice at 4:40 PM