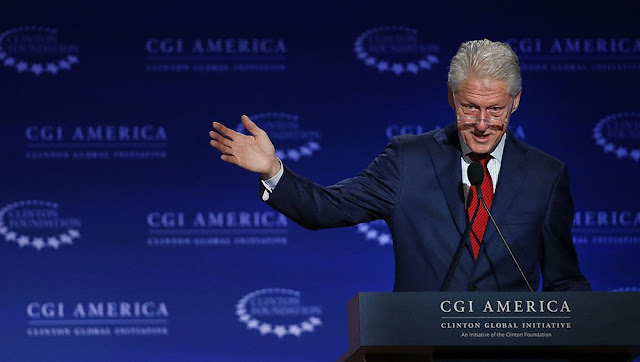 Bill Clinton's fundraising activities at the Clinton Foundation raise serious questions -- questions that only a special prosecutor can answer. (AP)

Scandal: Hillary Clinton says if she wins the presidency, it might be a good idea for former President Clinton to cut his ties to the Clinton Family Foundation. Good idea? A new IBD/TIPP Poll suggests that average Americans are way ahead of her on this issue.
"I don't think there are conflicts of interest" with having former Bill Clinton run a foundation that raises money around the world during her campaign, Hillary Clinton said in an interview with ABC News on Tuesday. Americans, it seem, would disagree.


Average people have a far less benign view of what's gone on at the Clinton Foundation. And it looms as a major problem for Clinton as she pursues the presidency.


In our latest IBD/TIPP Poll, taken the week of Aug. 26 to Sept. 1, shows that Americans are increasingly wary of the Clinton Foundation's questionable practices, which IBD has written about extensively. The poll of 934 adults has a margin of error of +/- 3.3 percentage points.


The ups and downs of the Clinton Foundation, it turns out, are of big interest to average Americans. Some 72% in the IBD/TIPP Poll said they are following it.


Perhaps more significantly, of the 72% who are following it, three-fourths — or 77% -- believe that donors to the Clinton Foundation received special access and favors from the State Department while Hillary Clinton was secretary of state from 2009 to 2013.


And there is, surprisingly, bipartisan agreement on this: Some 55% of Democrats agree that the Clintons used public office to dispense favors to their foundation's friends.


Yet, those investigating both the Clinton email scandal and the related questions about the Clinton Foundation have been met with hostility by Clinton partisans.


FBI Director James Comey, who all but indicted Hillary with his words when he announced he would not prosecute her, this week even had to defend his decision to release more documents from his investigation.


For the record, his investigation — and subsequent testimony to Congress — found that Hillary lied repeatedly about her home-brew email server and about sending and receiving classified information on it. All of these are crimes.


It strongly suggests a quid-pro-quo relationship, given that the State Department can act as a favor-giver and gatekeeper for business deals and other lucrative arrangements around the world.
It reeks of a corrupt pay-to-play system based on a major conflict of interest, in which Hillary Clinton was ideally positioned to grant government favors to those who had already enriched her, her husband Bill and her daughter, Chelsea, by giving boatloads of money to the eponymous family foundation.


Charles Ortel, a highly regarded Wall Street financial expert, took a look at the Clinton Foundation's books over the last year or so and this week published his partial conclusion: "To informed analysts, the Clinton Foundation appears to be a rogue charity that has neither been organized nor operated lawfully from inception in October 1997 to date ... it is a case study in international charity fraud, of mammoth proportions."


Based on what appears to be repeated violations of the law and a shocking disregard for the minimal ethics requirements of government officials, it's time for a special prosecutor of Hillary Clinton to look into both the family foundation and the emails.


Our polling shows Americans would definitely support such a move, either before or after the election.
According to IBD/TIPP, nearly two-thirds (63%) think a special prosecutor should be appointed. And 88% of Republicans and 68% of Independents want a special prosecutor to look into the possible misconduct. The sentiment that something wrong has taken place is overwhelming.


To save the nation from another failed presidency, it's time to put this issue to rest by naming a special prosecutor.