To view Video 1 filmed by Project Veritas Action Project, click the below link:


Key Clinton Operative: “It doesn’t matter what the friggin’ legal and ethics people say, we need to win this motherfucker” 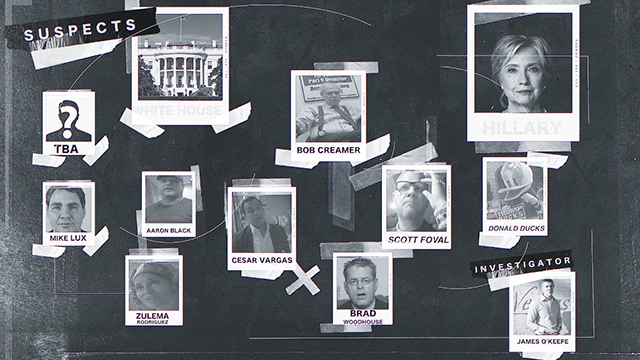 Project Veritas Action has just released the first video in a multi-part series which exposes the dark secrets at the highest levels of the DNC and Clinton presidential campaign. Using hidden cameras, undercover journalists reveal key players coordinating clandestine operations in support of Hillary Clinton’s campaign. The video, supported by emails recently released by WikiLeaks, shows that the dirty tricks, lines of communications and the money trail lead all the way to the top.


The video discloses numerous examples of behind-the-scenes shady practices with consequences most Americans have seen on national television at Donald Trump campaign rallies across the country. What the media hasn’t reported is that the Clinton campaign and Democratic National Committee has been directing these activities with, at very best, a very thin veil of plausible deniability. This series of videos is the culmination of a year-long investigation by the undercover journalists at Project Veritas Action.


Scott Foval is the National Field Director for a non-profit organization named Americans United for Change. In the video, he told an undercover investigator that they contract “directly with the DNC and the [Clinton] campaign both.”


“I am contracted to him [Bob Creamer],” says Foval to an undercover reporter. “But I answer to the head of Special Events for the DNC and the head of special events and political for the campaign.”


Bob Creamer founded and is listed as a partner on the website of the Democratic consulting firm Democracy Partners. He is the husband of Jan Shakowsky, a congresswoman from Chicago. In 2005, he plead guilty to tax violations and bank fraud.


“Wherever Trump and Pence are going to be, we have events and we have a whole team across the country that does that both consultants and people from the Democratic Party,” Creamer told an investigator. “And the Democratic Party apparatus and the people from the campaign, the Clinton campaign and my role with the campaign, is to manage all that.”


“The thing that we have to watch, is making sure there is a double blind between the actual campaign and the actual DNC and what we’re doing,” states Foval while conduit of information between the DNC, Clinton campaign, Political Action Committees, the AFL-CIO and other organizations. “There’s a double blind there.  So they can plausibly deny that they knew anything about it.”


Foval explains, “The campaigns and DNC cannot go near Priorities, but I guaran-damn-tee you that the people who run the Super PACs all talk to each other and we and a few other people are the hubs of that communication.”


“I just had a call with the campaign and the DNC, every day at one o’clock,” says Creamer subordinate Zulema Rodriguez.


When discussing what sorts of dirty tricks Foval, Creamer and others manage at the bequest of the DNC and Clinton campaign, a Project Veritas Action investigator asks Foval if he would recognize Foval’s work.


“You remember the Iowa state fair thing where Scott Walker grabbed the sign out of the dude’s hand and then the dude kind of gets roughed up right in front of the stage right there on camera?” Foval asks. “That was all us. The guy that got roughed up is my counterpart who works for Bob.”


Foval adds that they “planted multiple people in that front area around him and in the back to make sure there wasn’t just an accident happen up front, there was also a reaction that happened out back.”


Foval also references Shirley Teeter, a sixty-nine-year-old lady who claims that she was assaulted at a Trump rally in North Carolina.


The phrase bird doggingr also appears in an email released by WikiLeaks where Clinton campaign manager Robby Mook suggests it might be a tactic to employ to shore up support with Hispanic voters. 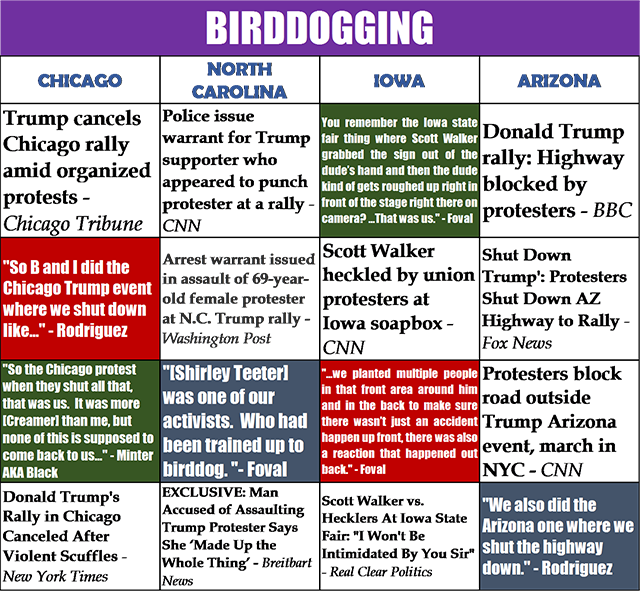 “I’m basically deputy rapid response director for the DNC for all things Trump on the ground,” says a new character in the undercover video.


This character says his name is Aaron Black, but it is ireally Aaron Minter. “Yeah, and nobody is really supposed to know about me.”


In the hidden camera video, Black shares credit with Creamer for the Chicago Trump rally which was shut down.


“So the Chicago protest when they shut all that, that was us,” says Black/Minter. “It was more him [Bob Creamer] than me, but none of this is supposed to come back to us, because we want it coming from people, we don’t want it to come from the party.  So if we do a protest and it’s a DNC protest, right away the press is going to say partisan.  But if I’m in there coordinating with all the troops on the ground and sort of playing the field general but they are the ones talking to the cameras, then it’s actually people.  But if we send out press advisories with DNC on them and Clinton campaign it just doesn’t have that same effect.”


“So B and I did the Chicago Trump event where we shut down, like all the yeah…” confirms Rodriguez, who also admitted to shutting down the highway at a Trump event in Arizona.


“I’m saying we have mentally ill people, that we pay to do shit, make no mistake,” says Foval in the video. “Over the last twenty years, I’ve paid off a few homeless guys to do some crazy stuff, and I’ve also taken them for dinner, and I’ve also made sure they had a hotel, and a shower.  And I put them in a program.  Like I’ve done that.  But the reality is, a lot of people especially our union guys.  A lot of our union guys…they’ll do whatever you want.  They’re rock and roll. When I need to get something done in Arkansas, the first guy I call is the head of the AFL-CIO down there, because he will say, ‘What do you need?’  And I will say, I need a guy who will do this, this and this.  And they find that guy.  And that guy will be like, Hell yeah, let’s do it.”


“Tomorrow we release our next installment of this investigation where we expose a voter fraud scheme discussed at the highest levels.  The Hillary Clinton campaign is leaving nothing to chance as we have seen and will continue reveal as our undercover investigation into the dark machine of the Hillary Clinton campaign continues,” says Project Veritas Action President James O’Keefe. “Hillary, check your email.”


Project Veritas Action was founded by James O’Keefe to investigate and expose corruption, dishonesty, self-dealing, waste, fraud and other misconduct.