EXPOSED IN COURT: The Depth of Hillary Clinton’s Lies About Her Private Server 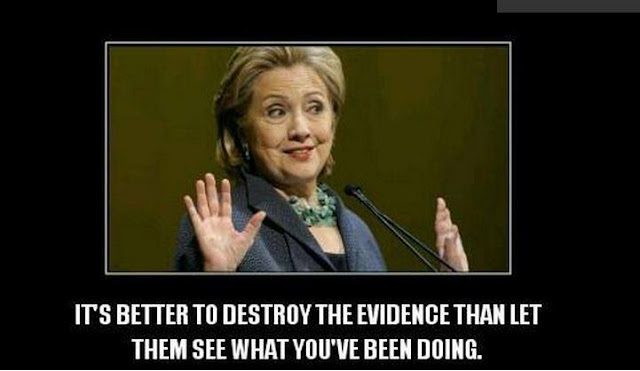 In Friday’s court-ordered release of Hillary Clinton’s deleted emails, an exchange between her and Huma Abedin further undercuts her claim that she opted to use a private server for “convenience.”


According to the 2010 email, which appears to have been withheld despite clearly being work-related, Abedin wrote to inform Clinton that her emails were going to spam and that she should begin using an official state.gov address to fix the problem.

See the email and comment from the RNC below:


“Once again, Hillary Clinton’s claim that she set up her illicit private server for ‘convenience’ has been shown to be a complete lie.


Given that more than half of Clinton’s non-governmental meetings were with Clinton Foundation donors, it’s clear the server was always about covering up pay-to-play corruption at her State Department.” – RNC spokesman Michael Short


In 2010, Clinton State Department Aide Huma Abedin Said To Clinton “We Should Talk About Putting You On State Email Or Releasing Your Email Address To The [State] Department” Because Her Emails Were Going To Recipients Spam Folders.”


Here’s the text of the email and further below is the image of that email:


“We should talk about putting you on state email or releasing your email address to the department so you are not going to spam. Its (sic) not the phone message system, its (sic) the device delay.” (Huma Abedin, Email To Hillary Clinton, State Department FOIA, 11/13/10) 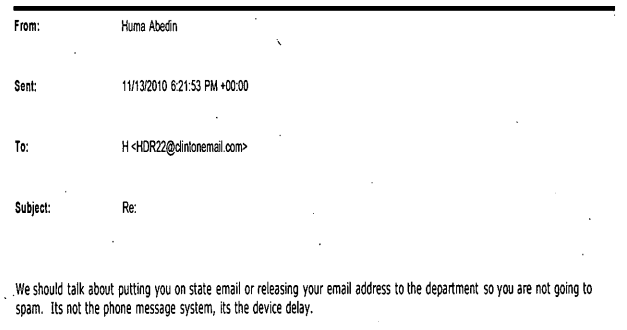 Career FOIA and Department of Justice officials are casting doubt on Patrick Kennedy’s dubious explanation for why he appeared in an FBI report negotiating a “quid pro quo” deal with an agent trying to change the classification of a Hillary Clinton email.


Kennedy said on Tuesday that “I wanted to better understand a proposal the FBI had made to upgrade one of former Secretary Clinton’s emails prior to its public release.”


But he also flatly denied that the issue of FBI Iraq slots and the classification issue were raised in the same breath.


But on Tuesday, the unnamed FBI official revealed himself as Brian McCauley in interviews to the Washington Post and Politico.


The now-retired agent, who served as the FBI’s deputy assistant director for international operations, said for weeks he had been trying to get the State Department to sign off on his request to send two FBI employees to Baghdad.


In May 2015, Kennedy finally called back. Former Justice officials and FOIA experts questioned why Kennedy would reach out to McCauley, of all people, to “better understand” the bureau’s views on the specific classification decision.


“There is no way that Mr. Kennedy contacted the Deputy Assistant Director of International Operations to understand a proposed FBI classification decision, which would be made by an entirely different component of the FBI,” said Kel McClanahan, the executive director of National Security Counselors, an organization that specializes in litigation and FOIA requests to acquire government documents related to national security.


“The only reason Mr. Kennedy, who would be very familiar with this office and its area of expertise, would contact Mr. McCauley, would be to discuss international operations, in this case, the placement of FBI agents in Baghdad.” Bradley Moss, a Washington lawyer specializing in national security and disclosure law, added that the “explanation just doesn’t make sense.”


ICYMI: Yesterday, the RNC called on the State Department Inspector General to launch an investigation into the quid pro quo allegations.


The Republican National Committee is calling for an investigation into allegations that a State Department official pressed an FBI official to downgrade a classified email designation. In exchange, a "quid pro quo" was discussed. The RNC filed a letter to the State Department’s inspector general on Tuesday, demanding an investigation into an allegation made public Monday, when the FBI released 100 pages of documents related to its investigations into Hillary Clinton’s private email server while she was secretary of state. According to the FBI’s notes, an unnamed official in the bureau’s records management division alleged that Patrick Kennedy, undersecretary of state for management, pushed to have a classified email downgraded to unclassified it appeared in exchange for State allowing the FBI to place agents in more countries.


New emails are casting doubt on Hillary Clinton’s sworn testimony that she did not discuss her private server with her IT staffer Bryan Pagliano.


Emails recovered from Hillary Clinton's server by the FBI and made public Wednesday cast doubt on the former secretary of state's own testimony about her email use.


Responding to a set of questions under oath last week, Clinton said through her lawyer that she did not recall discussing her server with Bryan Pagliano, the IT aide whose immunity deal was the first to emerge publicly from the year-long FBI probe.


"Secretary Clinton states that she does not recall having communications with Bryan Pagliano concerning or relating to the management, preservation, deletion, or destruction of any emails in her clintonemail.com email account," Clinton testified through her lawyer, David Kendall, after raising objections to the question.


But emails provided to conservative-leaning Judicial Watch through the Freedom of Information Act show Clinton included Pagliano in discussions about her Blackberry, iPad and server when her network experienced problems in 2012.


The Clinton campaign “plotted to raise a bundle of campaign cash but then use the government to attack opponents for trying to do the same thing.”


The WikiLeaks email dumps are giving voters some insights into the realities of hardball politics.


Take the recent disclosures that show how the Clinton campaign plotted to raise a bundle of campaign cash but then use the government to attack opponents for trying to do the same thing.


The Clinton brain trust plotted to raise as much money as possible under current campaign laws, which they certainly have.


As everyone has reported, no candidate in history has raised more big money from more rich donors than Mrs. Clinton has.


But having cashed in themselves, the Clinton campaign then plotted to use the government’s campaign-finance enforcement machinery to harass their opponents for raising money.


And sure enough, the political left has ginned up a media campaign to change the FEC, and the Justice Department announced intensified scrutiny of campaign fundraising.


We criticized both moves, and we hope that has helped deter some nasty partisan abuse.


One of the many reasons we oppose limits on campaign donations is that politicians inevitably use them to punish their opponents.