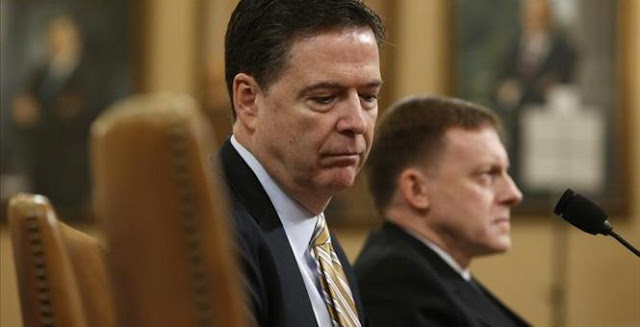 If you missed it, you should go back and peruse Katie's coverage of today's House Intelligence Committee hearing, at which FBI Director James Comey and National Security Agency chief Mike Rogers faced hours of questions from lawmakers.

As someone who is both (a) genuinely concerned about a foreign adversary's efforts to interfere in an American election, and (b) disturbed by politically-motivated leaks of classified national security material, I was interested to hear the questions from members on both sides of the aisle, and the responses they elicited.

Because there has been so much hysteria, speculation and extrapolation in connection to this saga, trying to stick to actual facts can be a challenge. Monday's proceedings helped clarify, establish, and re-establish some important points:

(1) There is absolutely no evidence that the Russians "hacked the election" by altering any vote totals. Using that term, and promulgating the resulting implication, is irresponsible.

And lest you think that this is a trivial point, I'd remind you that a decidedly non-trivial number of Americans believe that this form of direct tampering took place.

It's a baseless conspiracy:


Click here to see the video of this part of the testimony.


(2) It has now been officially confirmed, with the permission of the Justice Department, that the FBI is engaged in an investigation into the Kremlin's activities, including whether or not anyone in Trump's orbit was coordinating or colluding with Russia during the campaign.
That probe is active and ongoing, with an undetermined termination date.
So far there is zero evidence of improper collusion; even the very media reports that have fueled various rumors and accusations quoted unnamed official sources who've conceded as much, and who've further stated that the alleged contacts were not even necessarily unusual in nature.
Nevertheless, the US intelligence community has determined that Moscow's goals were threefold: To undermine Hillary Clinton's presidential campaign, to (conversely) boost the Trump campaign, and ultimately to undercut faith in the US electoral system (as well as Clinton's presidency, as the Russians anticipated her winning).
Russia's pursuit of malignant ends on this front is not speculative or "fake news."
It's the best assessment of our top intelligence and law enforcement professionals.
Here is the FBI chief acknowledging the Bureau's continued investigation:
Click here to view this portion of the hearing.


(3) Comey would not comment on the existence of an investigation into the national security leaks that have been splashed across front pages over recent months.
He and his NSA counterpart did, however, condemn illegal leaking in the strongest terms, averring that it endangers US national security, and is taken very seriously.
This is not a specific statement that this issue is also under a federal probe, but that's probably not an unreasonable conclusion to reach, given the context of their words.
Here's Rogers on the harm of unlawful leaks:
Click here to view this testimony.


(4) Comey and Rogers testified that there is no evidence to support President Trump's extraordinary accusations that President Obama ordered a wiretap on his phones during the election.
We've delved into this issue before, highlighting some reasons why it's potentially credible that some figures within Trump's circle likely were subject to some form of FISA-related surveillance.
But the two officials batted down the central allegations from Trump's infamous string of tweets, and backed up a strenuous denial from Britain's GCHQ about a related, unverified claim amplified by the White House.
Claims like these require serious proof, and there is none.
It's also worth noting that prior to the hearing, House Intelligence Committee Chairman Devin Nunes, a Republican, asserted that no FISA warrant for Trump Tower existed:


Click here to view this part of the hearing.