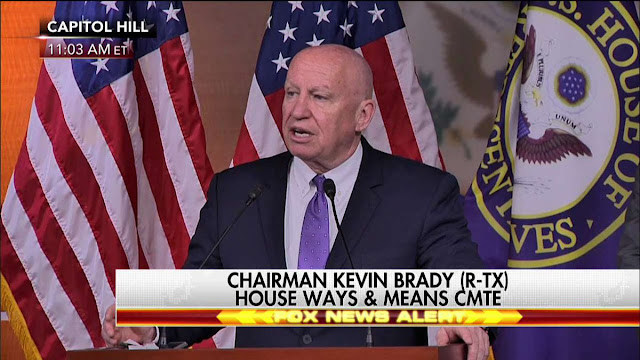 HHS Secretary on Obamacare Repeal: This Isn't About Trumpcare, It's About Patient Care


By Katie Pavlich
Speaking from the White House press briefing room Tuesday, Health and Human Services Secretary Tom Price rejected labels of the new Obamacare replacement plan as "Trumpcare."
"This isn't about Trumpcare, this is about patient care," Price said. "If you focus on the patients, I'll call it patient care."
"Many individuals can't afford the kind of coverage that they have right now," he continued. "This is a system that's not working for people."
Sitting on the table beside him was the 2000 page Affordable Care Act (Obamacare) and it's shorter replacement, 66-page long American Health Care Act.
The ACHA is still awaiting a score from the Congressional Budget Office.
When questioned Price couldn't say if the Trump administration fully embraced everything currently in the new bill, indicating the President plans to offer a number of negotiations to get to a final agreement.
"Obamacare drove costs up for everyone," Press Secretary Sean Spicer said. "We'll undo the massive disaster and give power back to the patient."
Spicer said Obamacare will not be repealed with one bill, but as part of a package that includes executive orders from the Oval Office.
"We're not jamming this through anyone's throat, it's going to go through a Committee process," he said. "When it was done last time, it was jammed down people's throat and look what happened...the consequences were devastating. 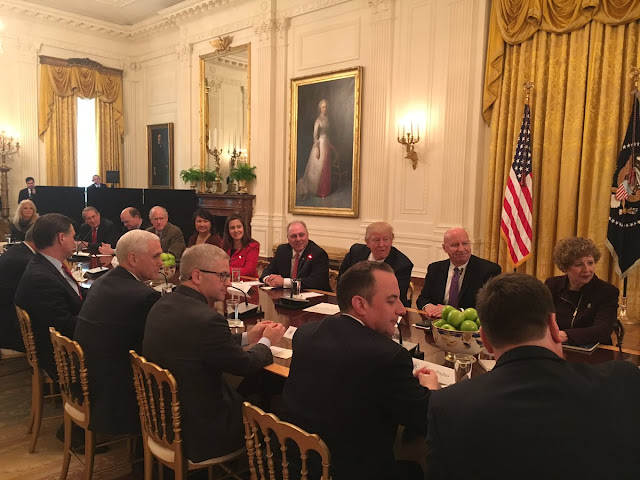 House Republicans on Monday evening released the text of their long-awaited ObamaCare replacement bill, proposing to eliminate the various taxes and penalties tied to the original legislation while still preserving certain patient protections.
Aiming to deliver on their signature campaign promise after several election cycles trying to reclaim control of Washington, majority Republicans unveiled what they call the American Health Care Act. The sweeping legislation would repeal ObamaCare’s taxes along with the so-called individual and employer mandates – which imposed fines for not buying and offering insurance, respectively.
It also would repeal the Affordable Care Act’s subsidies, replacing them with tax credits for consumers.
CLICK TO READ THE TEXT OF THE OBAMACARE REPLACEMENT BILL.


Click Here To Read The Rest Of this Article. 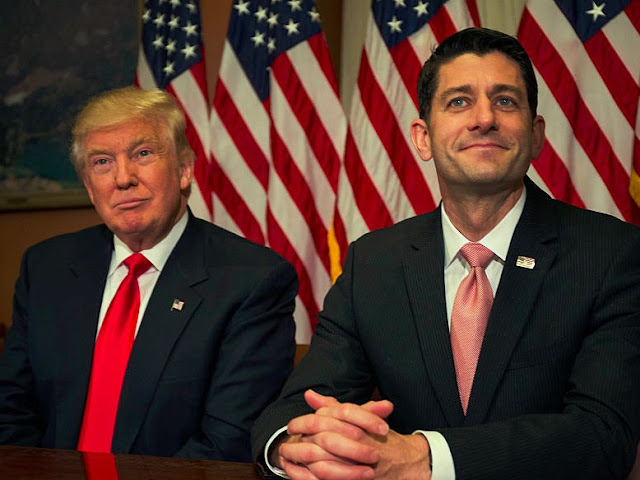 
House Republicans on Monday evening unveiled long-awaited legislation to repeal and replace the Affordable Care Act, the healthcare law better known as Obamacare.
The basic structure of the plan appears similar to previous Republican efforts to dismantle the law including the draft of the bill that was leaked late last month.
The bill, called the American Health Care Act, would do away with Obamacare's individual mandate that compels all American to buy insurance or face a fine. Instead, it features penalties such as increased premiums for failing to maintain continuous coverage.
The AHCA also would shift funding for people accessing healthcare without help from an employer or the Medicare or Medicaid programs and adjust funding for the expansion of Medicaid.
Key parts of the bill include:
Allowing people with preexisting conditions to access coverage but penalizing lapses in coverage: Under the new law, insurers still could not deny coverage based on a preexisting condition, but anyone who does not have coverage for a period of 63 days or more in the previous year is subject to a 30% increase in premiums as a penalty. The idea would be to discourage people from waiting until they are sick to access coverage.
Introducing block tax credits for individuals to access health insurance: Instead of the ACA's tax credits, which adjusted the amount distributed based on income and the beneficiary's residence, the AHCA would give lump tax credits to Americans. The credits would be based on age, and an individual making over $75,000 or a household making over $150,000 a year would see a decrease in the credit depending on how much he or she made over that limit. Here's the breakdown of how much each age group would get:

Providing grants to establish high-risk pools and encourage enrollment: Much as with the leaked draft, the AHCA would include a fund for states to institute numerous programs to stabilize the insurance market, most notably "the provision of financial assistance, high-risk individuals who do not have access to health insurance coverage offered through an employer." This would allow states to establish high-risk pools for people with preexisting conditions, a plan often floated by Republicans. The plan would give states $15 billion in both 2018 and 2019 and $10 billion every year after that through 2026.
Changing the limit that insurers can charge older customers compared with younger customers: Under the ACA, insurers can charge older customers (generally sicker and more expensive to cover) no more than three times what they charge their youngest customers (generally healthier). The Republican bill would shift that to five times the amount.
Effectively defunding Planned Parenthood: The bill prohibits "direct spending" of federal dollars on any "prohibited entity" including those that provide abortions for anything other than the life of the mother, incest, or rape. This would seem to include Planned Parenthood.
Kick lottery winners off of Medicaid: The bill spends six pages detailing instances in which a person who receives a lump sum or large payments from winning the lottery would be kicked off of Medicaid.
President Donald Trump was quick to dive in with a tweet from the @POTUS account.
"House just introduced the bill to #RepealAndReplace #Obamacare. Time to end this nightmare," the tweet said.
House Speaker Paul Ryan said in a statement that the plan would help reform the American healthcare system.
"The American Health Care Act is a plan to drive down costs, encourage competition, and give every American access to quality, affordable health insurance," Ryan said. "It protects young adults, patients with preexisting conditions, and provides a stable transition so that no one has the rug pulled out from under them."
On the other end, Democrats were quick to criticize the proposal. Reps. Frank Pallone and Richard Neal, the top Democrats on the House Energy and Commerce Committee and the Ways and Means Committee, respectively, said in a joint statement that the bill would be detrimental to average Americans.
"The Republican repeal bill would rip healthcare away from millions of Americans, ration care for working families and seniors, and put insurance companies back in charge of healthcare decisions — contrary to everything President Trump has said he would do with his healthcare plan," the statement from Pallone and Neal said.
The bill faces a long path toward becoming law: It would have to be marked up by the Energy and Commerce Committee, passed by the House, debated by the Senate, and passed by the Senate, at least, before it could go to Trump's desk.
This path is also complicated by the fact that conservative members of the House and the Senate have come out against the tax-credits aspects of the House bill and criticized the leaked draft. Moderate Republicans have also criticized the lack of clarity over the future of Medicaid expansion, which is popular in states that have undertaken expansion.
Thus, the bill released the House GOP may face significant opposition from the Republican Party itself, to say nothing of the Democrats. 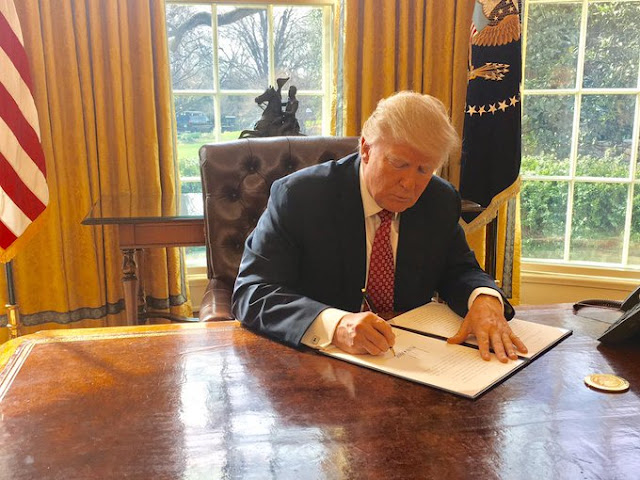 
The order also places a 120 day hold on U.S. refugee acceptance from any country. From this point forward, there will be a 10-day implementation period and the order will go into effect on March 16.
The first executive order Trump issued three weeks ago had Iraq on the list of banned countries, but after verification the local vetting system is capable of keeping terrorists out of the U.S., it was taken off.
Green card holders from countries listed in the order are exempt. Iran, Libya, Somalia, Sudan, Syria, and Yemen are still on the list.
"The close cooperative relationship between the United States and the democratically elected Iraqi government, the strong United States diplomatic presence in Iraq, the significant presence of United States forces in Iraq, and Iraq's commitment to combat ISIS justify different treatment for Iraq," the order states.
"In particular, those Iraqi government forces that have fought to regain more than half of the territory previously dominated by ISIS have shown steadfast determination and earned enduring respect as they battle an armed group that is the common enemy of Iraq and the United States."
Speaking from the State Department Monday, Secretary Rex Tillerson explained how the executive order will be implemented and asked U.S. allies for patience.
"With this order, President Trump is exercising his rightful authority to keep our people safe," Tillerson said. "It is the president's solemn duty to protect the American people."
"This order is part of our ongoing efforts to eliminate vulnerabilities that radical Islamists terrorists can and will exploit," he continued.
Attorney General Jeff Sessions and Homeland Security Secretary John Kelly also made statements explaining how the Department of Justice will enforce the law and the executive order on behalf of keeping Americans safe. They did not take questions from the press.
"This executive order seeks to protect the American people as well as lawful immigrants," Sessions said. "More than 300 people who came here as refugees are under an FBI investigation today for potential terrorism-related activities."
“The Executive Order signed today by President Trump will make America safer, and address long-overdue concerns about the security of our immigration system. We must undertake a rigorous review of our visa and refugee vetting programs to increase our confidence in the entry decisions we make for visitors and immigrants to the United States. We cannot risk the prospect of malevolent actors using our immigration system to take American lives," Kelly added.
"We will continue to work closely with our operating components and across government to implement and enforce it humanely, respectfully, and with professionalism."


VIDEOS FROM THE WHITE HOUSE


President Trump's Speech Before The Joint Session of Congress