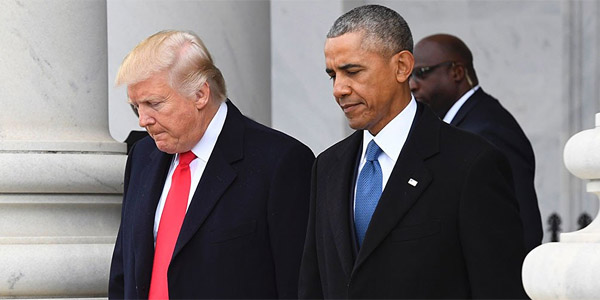 While the American Intelligence Community (IC) plays "not us" when it comes to claims that the Obama Administration spied on President Trump (when he was both a candidate and President-elect), Fox News has learned that in order to avoid a paper trail, fingerprints, and pesky little details like the Bill of Rights, President Obama circumvented all of that by requesting the British spy on Trump.


Appearing on Fox News this morning, Judge Andrew Napolitano dropped this bombshell that could finally help to explain a whole lot, including a January 19 New York Times report about the Obama White House looking at intelligence information based on "wiretaps" (their word, not mine).
Here’s part of the Napolitano transcript:


During an appearance last night on Fox News, Napolitano went into greater detail to explain exactly how this would work. Basically, our NSA has access to pretty much every phone call. This is how they collect all that metadata. If they wish, however, they "can actually download into digital form the conversations and the texts" and turn it into transcripts. Through our NSA, the British have 24/7 access to that same capability.
In other words, according to these sources, Obama tapped into a wiretap that is already in place on pretty much all of us, including Trump and his team. It is only accessed, though, when there is a specific request from someone like the President of the United States. Napolitano also explained that the law allows the President to legally do this to anyone he wants for any reason he wants. No warrant required.
I should add that as of last night, all Napolitano reported was that Obama had this capability. He did not say his sources claimed the Obama Administration had actually done this.
As of this morning, however, three sources say this is exactly what Obama did, which would help to finally make sense of this New York Times report from January 19 – a report that clearly stated the Obama White House was receiving reports from Trump wiretaps" [emphasis added with the print headline]
Wiretapped Data Used In Inquiry of Trump Aides …
The F.B.I. is leading the investigations, aided by the National Security Agency, the C.I.A. and the Treasury Department’s financial crimes unit. The investigators have accelerated their efforts in recent weeks but have found no conclusive evidence of wrongdoing, the officials said. One official said intelligence reports based on some of the wiretapped communications had been provided to the White House.
Remember, prior to Trump breaking this story wide open with his Tweets about the Obama Administration spying on him, in order to make this phony RussiaGate story appear serious, our corrupt mainstream media was eager to make it look as though the Obama Administration was investigating Trump, including, as you can see in The New York Times story above, through wiretaps.
Obviously, now that this approach has backfired on their Precious Barry, the media is playing Nevermind.
Before the day is out, in order to muddy the waters and protect Barry, our media will vehemently attack the credibility of Fox News and their sources – and the very same media doing this will be the one that has been using confidential sources for six months to spread all this Fake News  regarding the Nothingburger that is RussiaGate.
Posted by Frances Rice at 7:28 PM