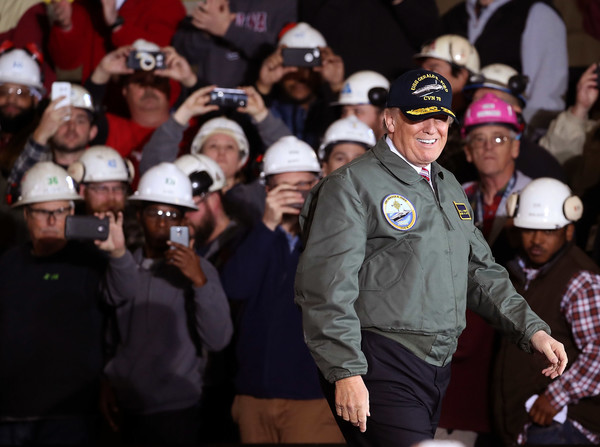 
• Official February numbers will be out on Friday and are expected to lower the unemployment rate to 4.7 per cent


• That language came from a similar report compiled by LinkedIn


The report from ADP, a global human resources and payroll firm, provides the first hard economic numbers from Donald Trump's first full month as president.
Trump wrote Wednesday on Twitter about another similar measure, citing numbers from a new LinkedIn workforce report that showed strong job-adding numbers from January and February.
Those months 'were the strongest consecutive months for hiring since August and September 2015,' the president tweeted, mirroring the report's language.
Construction jobs increased by 66,000 in February, and the manufacturing sector added 32,000.
Trump has pledged to dramatically improve the U.S. employment market in those sectors as he tries to lure businesses from overseas and stop jobs from fleeing across the border.
He has also promised $1 trillion in new infrastructure spending, another measure calculated to add jobs.
'February proved to be an incredibly strong month for employment with increases we have not seen in years,' Ahu Yildirmaz, vice president of the ADP Research Institute, said in a statement.
January's new-jobs numbers were also revised upward on Wednesday from 246,000 to 261,000.
'Confidence is playing a large role,' Mark Zandi, chief economist of Moody's Analytics, told CNBC.
'Businesses are anticipating a lot of good stuff – tax cuts, less regulation. They are hiring more aggressively.'
The official U.S. unemployment rate is expected to shift downward from 4.8 per cent to 4.7 per cent, in response to the official jobs numbers report, due Friday.


http://www.dailymail.co.uk/news/article-4293622/Trump-s-month-brings-massive-employment-boom.html
Posted by Frances Rice at 10:18 AM