The U.S. Senate confirms Dr. Ben Carson as the secretary of Housing and Urban Development and was sworn in today 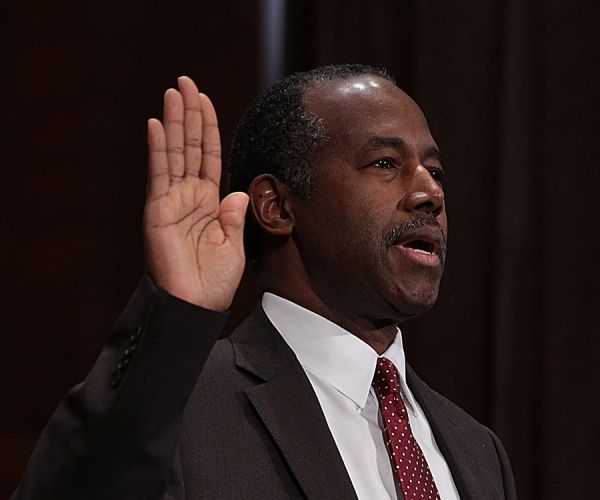 ﻿
Secretary of Housing and Urban Development-designate Ben Carson is sworn in during his confirmation hearing before Senate Banking, Housing and Urban Affairs Committee on Jan. 12, 2017, on Capitol Hill in Washington, D.C. (Alex Wong/Getty Images)


Retired neurosurgeon Ben Carson was confirmed by the Senate Thursday to become housing secretary in the Trump administration.
Carson, a former Republican presidential candidate who battled Trump for the GOP nomination, was confirmed for the Cabinet position by a 58 to 41 vote.
In his role as head of the Department of Housing and Urban Development, or HUD, Carson will lead more than 8,300 employees and handle an annual budget of nearly $47 billion.
The vote comes more than a month after Carson earned the bipartisan backing of the Senate Banking, Housing and Urban Affairs Committee, even gaining the support of two of the panel’s most liberal members — Democrats Sherrod Brown of Ohio and Elizabeth Warren of Massachusetts.


America has an opportunity to heal society with policies that are fair and equitable, according to Dr. Ben Carson, President Donald Trump’s nominee to run the Department of Housing and Urban Development.
“For a long time government has counted success by the number of people they can put in public housing,” Carson told a reception in Washington following Trump’s inauguration on Friday.
“We need to count success based on the number of people we get out of public housing.”
“I believe that this is an opportunity for us to heal some of the rips in our society and for us to show that we can do things in a fair and equitable manner,” he said.
“How do we develop the people of America?” Carson said rhetorically at the reception hosted by close adviser Armstrong Williams, adding that “we’ve got to be good, not only about putting them in shelter, but cultivating that God-given intellect.
“It was the intellect. It was the ‘can do’ spirit that made America into a great place, and the last thing we need to do is to trade that ‘can do’ spirit for a ‘what can you do for me’ spirit,” he added.
Carson told those in attendance that his life experience, including a career as an acclaimed pediatric neurosurgeon, has prepared him for an opportunity such as this.
“I spent 18 years on the board of Kellogg and the board of Costco,” Carson told Newsmax. “We started a national nonprofit, which has been very successful,” he said of the Carson Scholars Fund that he founded in 1994 with his wife, Candy.
“Taking pediatric neurosurgery at Johns Hopkins, and when I became a director, it wasn’t even on the map,” Carson said, adding that by 2008 a report “rated it No. 1 in the country.”
“So, I know something,” he added.
When Carson spoke to Newsmax on Election Day back in November, he said that one of the main reasons he decided to run for office initially was based on his desire to help the American people and bring about much needed change. It’s that same mindset that is a motivation to join Trump’s Cabinet.
“How do we make sure they become part of the fabric that drives America?” Carson said. “And as far as I’m concerned, that’s not a Democrat or Republican issue. This is an American issue.”
Carson awaits his confirmation by the United States Senate, after sitting before the committee on Jan. 12 for his confirmation hearing.
Critics have voiced their concerns about Carson’s ability to successfully lead HUD, but in his confirmation hearing, the renowned neurosurgeon and former GOP presidential candidate pointed to his own rags-to-riches story, assuring the Senate that he sympathizes with the millions of Americans who are enrolled in HUD programs, mainly because he can relate to what they go through, according to CNN.
“I have actually in my life understood what housing insecurity was,” Carson said during his testimony.