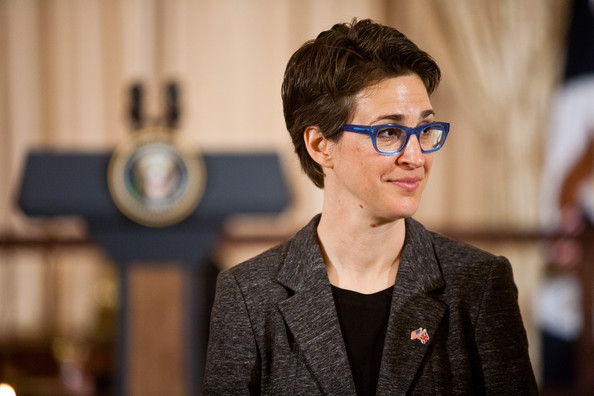 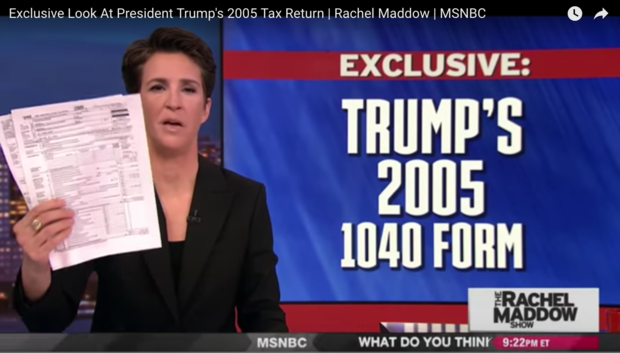 MSNBC host Rachel Maddow sent the media world into a tizzy Tuesday evening (March 14) with a tweet announcing, "We've got Trump tax returns." The actual details of the documents did not quite match the hype. (Screenshot)


Had the liberal Maddow, whose ratings have been on the rise since Donald Trump was elected president, hit the jackpot? Was she going to produce revelations connecting Trump to foreign investments in Russia? Would she expose the fact that the billionaire didn't pay taxes? Could she prove that he wasn't a billionaire at all?


The fact that it would be more than an hour before she actually unveiled her findings -- or more accurately the findings of Pulitzer Prize-winning investigative reporter David Cay Johnston --  was the first tip-off that there may be less to the big scoop than first thought.


In the meantime, the White House released a pre-emptive statement that detailed Trump's tax figures from 2005 before MSNBC had a chance to air its report.
The bottom line: Trump paid $38 million in federal taxes in 2005 on income of $153 million and reported a $105 million write-down in business losses.
That was pretty much it. No new details. No smoking gun. No evidence of nefarious dealings or accounting shenanigans.
The Washington Post succinctly noted: "In short: We didn't learn anything we don't already know about Trump. Yes, he is very wealthy. Yes, he -- like virtually all very wealthy people -- looks for holes in the tax code to lower his overall taxable income."
In fact, the release may have even helped Trump. The president, who unlike all other presidents going back to Richard Nixon has refused to release his tax returns, has admitted that he and his accountants tried to take advantage of every loophole available to keep his tax payments down. This return did nothing to suggest otherwise.
On the other hand, The New York Times and others had speculated that Trump "could have avoided taxes for nearly two decades" based on an analysis of his 1995 return. That was a story the Times touted early in October as Democrats pushed to make a campaign issue out of Trump's refusal to release his records. Oops.
The New York Times noted that "discussion between Ms. Maddow and Mr. Johnston veered into some odd directions, with Mr. Johnston mentioning a connection between Mr. Trump and the mob. And Ms. Maddow's opening monologue raised lingering questions about links between Mr. Trump and Russia -- questions that no simple 1040 form, like the one sent to Mr. Johnston, could address.
"It was not until the end of the program that Ms. Maddow invited on an NBC News political reporter, Hallie Jackson, who dialed in by telephone for a more sober analysis of the tax findings. By then, Ms. Maddow's show was about to end."
The lack of damning evidence prompted Johnston, who said he has no idea who leaked the two-page document to him, to speculate that it could even have been the president himself. "It's entirely possible Donald sent this to me, he said. "With Donald you never know."
Click here to view the Maddow video.


Tim Morris is an opinions columnist at NOLA.com | The Times-Picayune. He can be reached at tmorris@nola.com. Follow him on Twitter @tmorris504.
http://www.nola.com/opinions/index.ssf/2017/03/was_rachel_maddows_trump_tax_s.html
Posted by Frances Rice at 11:27 AM