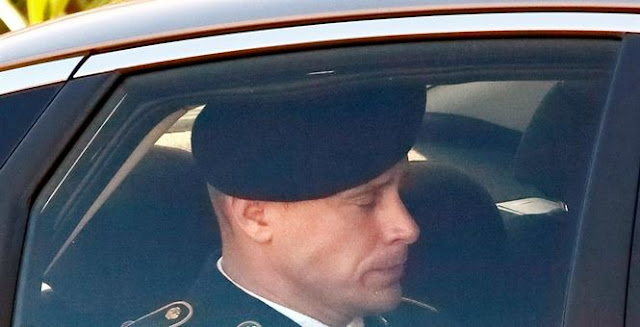 After facing life in prison, Army Sergeant Bowe Bergdahl is a free man after Judge Col. Jeffery R. Nance ruled Friday he will not face hard time for abandoning his fellow soldiers in Afghanistan and walking off his post eight years ago. He will lose his rank, be dishonorably discharged from the Army and be forced to forfeit $10,000 in payments. Prosecutors argued for a minimum of 14 years in prison. He faces none.

Bergdahl's trial, which took place at Fort Bragg in North Carolina, ended last week. He plead guilty to desertion and misbehavior in front of the enemy. After seeking out the Taliban, the terrorist group held Bergdahl captive for five years. He was traded for five high profile GITMO detainees in May 2014 by President Obama.


The wife of a soldier who was shot in the head and left with a traumatic brain injury while looking for Bergdahl testified in the sentencing phase in hopes of a harsh penalty and consequences.
National Guard Master Sgt. Mark Allen was on a mission with other US and Afghan troops to gather information in two villages in July 2009 when they were ambushed by insurgents using small arms, machine guns and rocket-propelled grenades.
Allen was attempting to make a radio call when he was shot near the temple. He suffered a traumatic brain injury that left him unable to speak, in need of a wheelchair and dependent on assistance for such everyday tasks as getting out of bed.
As a last resort, Bergdahl issued an apology at the end of the trial, saying he was sorry for putting others at risk in their efforts to find him. Six U.S. soldiers were killed looking for him: Staff Sergeant Clayton Bowen, Private 1st Class Morris Walker, Staff Sergeant Kurt Curtiss, 2nd Lieutenant Darryn Andrews, Staff Sergeant Michael Murphrey and Private 1st Class Matthew Martinek.
During an interview earlier this year, Bergdahl claimed he was treated better by the Taliban than the U.S. Army.
Is this why he was let off?
In closing arguments, defense attorneys argued that Bergdahl already had suffered enough confinement during five years of brutal captivity by Taliban allies. They asked the judge for a dishonorable discharge and no prison time. Their argument for leniency also cited harsh campaign-trail criticism by Donald Trump and Bergdahl's mental disorders.
Capt. Nina Banks, a defense attorney, said it wouldn't be justice to rescue Bergdahl from the Taliban "only to place him in a cell" now.
"Sgt. Bergdahl has been punished enough," Banks added. "Sgt. Bergdahl paid a bitter price for the choices that he made."
The judge also considered comments made by President Trump about Bergdahl.
President Trump’s harsh criticism of Sgt. Bowe Bergdahl, who walked off his Army post in Afghanistan in 2009 and was captured by the Taliban, will weigh in favor of a lighter sentence for the sergeant, a military judge said on Monday.
“I will consider the president’s comments as mitigation evidence as I arrive at an appropriate sentence,” the judge, Col. Jeffery R. Nance of the Army, said during a hearing at Fort Bragg. The judge is expected to sentence Sergeant Bergdahl in the next few weeks.
https://townhall.com/tipsheet/katiepavlich/2017/11/03/breaking-berghdahl-isnt-getting-prison-time-n2404502?utm_source=thdailypm&utm_medium=email&utm_campaign=nl_pm&newsletterad=
Posted by Frances Rice at 7:09 PM