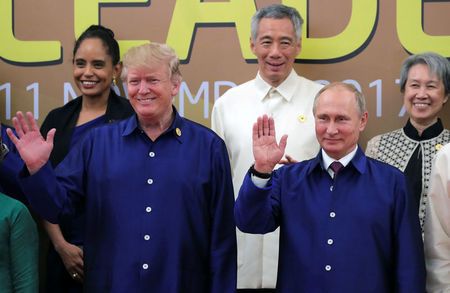 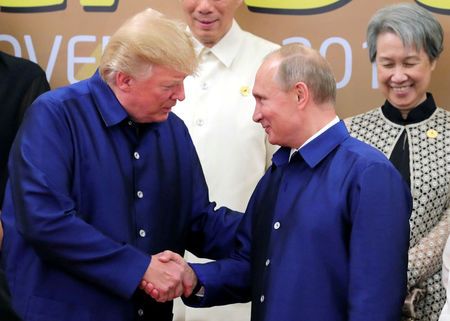 President Trump and Russian President Vladimir Putin shake hands as they take part in a family photo at the APEC summit. Sputnik/Mikhail Klimentyev/Kremlin via REUTERS

DANANG, Vietnam (Reuters) - U.S. President Donald Trump and Russia's Vladimir Putin shook hands at the Asia-Pacific Economic Cooperation (APEC) summit dinner in Vietnam on Friday, even though the White House said there would be no formal meeting.

Trump and Putin smiled and stood next to each other for the traditional group photograph. Then they parted to sit at different parts of the table.

The White House said earlier that no formal meeting was planned because of scheduling conflicts on both sides, though it was possible they would bump into each other.

"In terms of a scheduled, formal meeting, there's not one on the calendar and we don't anticipate that there will be one," White House press secretary Sarah Sanders told reporters minutes before landing in Danang.

The main meeting of leaders from APEC countries is on Saturday in the Vietnamese resort city of Danang. Trump is on the fourth leg of a 12-day tour of Asia.

https://ca.news.yahoo.com/white-house-says-trump-putin-not-separate-meeting-055641777.html
﻿
These are the companies behind Trump's $250 billion of China deals
By Daniel Shane 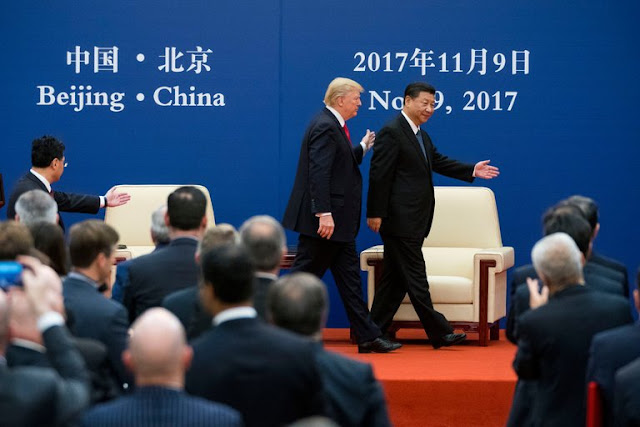 The U.S. dealmaker-in-chief appeared to strike a rich vein in China.
President Trump and his Chinese counterpart, Xi Jinping, on Thursday announced more than $250 billion in deals between the two countries across industries like energy, technology and aviation.
Here are some of the major ones:
U.S. energy
China could pour more than $100 billion into U.S. energy projects in the coming years under two of the deals.
One is an $84 billion plan from state-owned China Energy Investment Corp. to invest in shale gas and chemical manufacturing projects in West Virginia. That comes with a couple of caveats, though. It's spread out over 20 years and the deal is only a memorandum of understanding rather than a finalized contract.
Another plan aims to invest as much as $43 billion in Alaska's energy sector. China Petroleum & Chemical Corp., better known as Sinopec (SHI), and the Alaskan government will jointly develop the state's liquified natural gas industry. Alaska says the agreement will create up to 12,000 jobs.
Both agreements are part of China's strategy to cut its dependency on polluting coal and pivot to relatively cleaner forms of energy. It already imports natural gas from countries including Qatar.
"U.S. imports could help ensure that Beijing does not become too dependent on any one (country)," said Hugo Brennan, an analyst at consultant Verisk Maplecroft. But he added the deals are structured so Beijing can "quietly back away" later on if it needs to.
Commercial jets
Boeing (BA) announced it's selling $37 billion worth of airliners to China. It's unclear how many of the orders are new.
"We're treating these numbers with caution," said Greg Waldron, Asia managing editor at research provider FlightGlobal.
The agreement for 300 planes is with a government holding company that buys jets for state-owned carriers such as Air China (AIRYY) and China Southern Airlines (ZNH).
A similar $38 billion deal was announced in 2015 when Xi visited Boeing's largest factory in Washington state.
What's certain is that China has a huge appetite for new planes. The country is set to overtake the U.S. to become the world's biggest air travel market within five years and needs the aircraft to meet that rapidly growing demand.
Over the summer, European rival Airbus (EADSF) won a $22 billion deal to supply China with 140 new airplanes.
U.S. chips for Chinese phones
American chipmaker Qualcomm (QCOM, Tech30) inked $12 billion in non-binding deals to supply components to Chinese smartphone brands Xiaomi, Oppo and Vivo.
China is already a massive market for Qualcomm, accounting for more than half its sales. The company has also run into trouble there: Chinese regulators fined it $975 million in 2015 for breaking antitrust laws.
Qualcomm is the subject of a $130 billion takeover bid from rival Broadcom (AVGO) that could create a U.S. behemoth.
-- Jon Ostrower contributed to this report.
http://money.cnn.com/2017/11/09/investing/china-trump-business-deals/index.html
______________
Trump's Asia trip: Stops in Japan, China and beyond 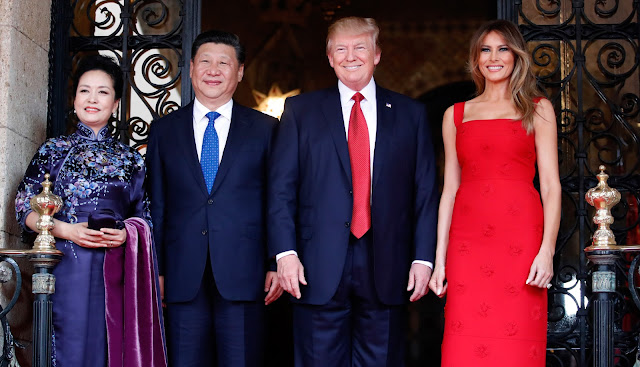 
President Trump was in Veitnam on Friday as part of a trip that will later take him to the Philippines.
"The president's trip will focus on three goals," National Security Adviser H.R. McMaster told reporters last week during a White House briefing. "First, strengthening international resolve to denuclearize North Korea. Second, promote a free and open Indo-Pacific region. Third, advance American prosperity through fair and reciprocal trade and economic practices." 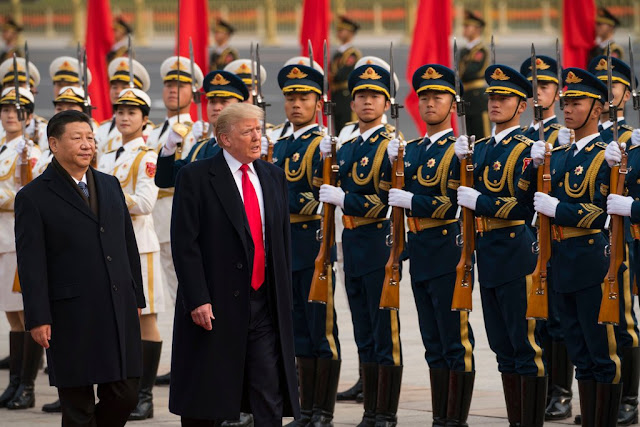 "President Trump will reiterate the plain fact that North Korea threatens not just our allies South Korea, Japan and the U.S.," but, McMaster said, is also "a threat to the entire world."
McMaster also said that Trump "will continue to call on all responsible nations, especially those with the most influence over North Korea, to isolate the North Korean regime economically and politically."
Here’s what you should know about the president’s upcoming travels.
Hawaii


Trump left for the Aloha State on Friday. Trump was briefed by the U.S. Pacific Command and visited the memorial to the U.S.S. Arizona, a ship which sank during World War II.
Japan


The president played golf with Japanese Prime Minister Shinzo Abe and world No. 4 golfer Hideki Matsuyama on Sunday.
Trump tweeted a video of him playing, writing, "Playing golf with Prime Minister Abe and Hideki Matsuyama, two wonderful people!"
Trump hosted Abe at Mar-A-Lago earlier this year and they golfed together at the time.
“Pen-Pineapple-Apple-Pen (PPAP)” singer Pikotaro also shared photos of himself with Trump and Abe at a dinner on Facebook Monday.
Trump also met with families of Japanese abductees taken by North Korea on Monday, Reuters reported.
The White House said last month that Trump's activities in Japan would include meeting service members and bilateral meetings.
South Korea
Trump and South Korean President Moon Jae-in made a joint visit to Camp Humphreys, a military base about 40 miles south of Seoul, on Tuesday. Trump shook hands with American and Korean service members, and he and Moon had lunch with troops in a large mess hall.
The visit was intended to underscore the countries' ties and South Korea's commitment to contributing to its own defense.
Trump and first lady Melania Trump later attended a welcoming ceremony at South Korea's Blue House.
Trump also participated in bilateral meetings with Moon on Tuesday and went to a state dinner.
On Wednesday, Trump delivered a speech at the National Assembly in Seoul during which he told North Korea, "Do not underestimate us."
Trump also paid a visit to Seoul National Cemetery on Wednesday.
A surprise trip to the Demilitarized Zone, which has separated the North and South for decades, was scrapped due to weather.
China


"Melania and I look forward to being with President Xi & Madame Peng Liyuan in China in two weeks for what will hopefully be a historic trip!" Trump tweeted ahead of his visit.
The president arrived in Beijiing on Wednesday. He and the first lady were greeted at the airport by dozens of children who waved U.S. and Chinese flags and jumped up and down.
The couple shared tea with Chinese President Xi Jinping and his wife, Peng Liyuan, and received a private tour of the historic Forbidden City, Beijing's ancient imperial palace. Young opera students performed for them before dinner.
Trump said afterward that he was "having a great time" in China and threw open his arms and appeared to exclaim, "Wow!"
On Twitter later, Trump wrote: "On behalf of @FLOTUS Melania and I, THANK YOU for an unforgettable afternoon and evening at the Forbidden City in Beijing, President Xi and Madame Peng Liyuan."
In another tweet, Trump said, "Looking forward to a full day of meetings with President Xi and our delegations tomorrow. THANK YOU for the beautiful welcome China! @FLOTUS Melania and I will never forget it!"
Trump's time in China has also included bilateral meetings with Xi.
On Thursday evening, Trump and the first lady attended a state dinner held in the Great Hall of the People in Beijing, which former NBA player Yao Ming also attended.
Trump previously hosted Xi in April at his golf club, Mar-a-Lago, in Palm Spings, Fla.
Vietnam


Trump made his way to Da Nang on Nov. 10 and took part in the Asia-Pacific Economic Cooperation (APEC) events.
APEC consists of 21 member economies, including the U.S., and "is the premier forum for facilitating economic growth, cooperation, trade and investment in the Asia-Pacific region," according to the State Department.
Trump gave a speech at the APEC summit, reaffirming his "America first" policy.
“From this day forward we will compete on a fair and equal basis,” Trump said. “We are not going to let the United States be taken advantage of anymore.”
While Trump and Russian President Vladimir Putin, who also attended the APEC summit, did not have a formal meeting, the two shook hands at the event.
Trump will head to the Vietnamese capital of Hanoi Nov. 11 “for an official visit and bilateral engagements with President Tran Dai Quang and other senior Vietnamese leaders,” the White House said.
Philippines


Trump is expected to arrive in Manila on Nov. 12 to attend an Association of Southeast Asian Nations (ASEAN) 50th anniversary dinner, the White House said.
McMaster said that during the event, Trump "will discuss how to strengthen partnerships across the Indo-Pacific to further efforts against transnational terrorist organizations."
ASEAN consists of 10 members: Brunei, Cambodia, Indonesia, Laos, Malaysia, Myanmar, the Philippines, Singapore, Thailand and Vietnam.
One day later, Trump will “celebrate the 40th anniversary of U.S.-ASEAN relations at the U.S.-ASEAN Summit,” the White House said.
He’s also expected to meet that day with Philippines President Rodrigo Duterte, who has been accused of human rights abuses, including killing suspected drug dealers. The White House has said that Trump could raise concerns about the program.
But a senior administration official who spoke last week said that Trump and Duterte have "a warm rapport," The Guardian reported.
The Associated Press contributed to this report.
http://www.foxnews.com/politics/2017/11/10/trumps-asia-trip-stops-in-japan-china-and-beyond.html
Posted by Frances Rice at 4:38 PM