Oops: A Liberal Attack on the GOP Tax Plan Accidentally Proves How Many People Would Benefit From It 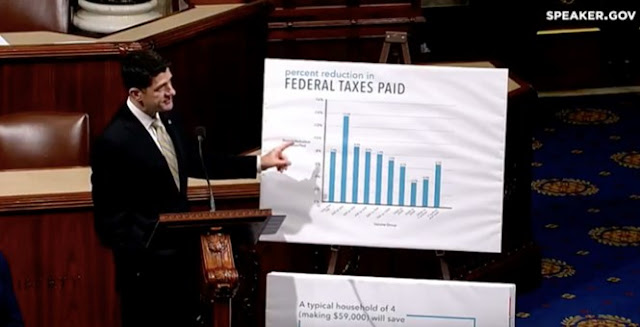 Thirteen Republicans voted no, almost all of whom represent high-tax blue states; the bill partially eliminates the federal deduction for state and local taxes, which disproportionately benefits those who live in places like New York and California -- effectively insulating them from the consequences from electing tax-and-spend liberals.

While there are legitimate quibbles about certain elements of the legislation, it represents enormous progress as an across-the-board tax cut, coupled with long-awaited simplification.

Brackets are consolidated, income tax rates are slashed for nearly all taxpayers (excluding millionaires), and the tax code is made more competitive for many small businesses and corporations.

Independent analyses have found that the proposal would (a) result in net tax reduction for average taxpayers and households across all five income groups, including middle-income families, (b) create nearly one million new, full-time American jobs, and (c) boost US economic growth.  The average household of four people, based on national median income, would save nearly $1,200 on their tax bill next year.  Democrats are predictably denouncing the plan as "tax giveaways to the rich," which is what they always, say no matter what (reminder: "the rich" pay more than their fair share of taxes already), but the data tells a different story: 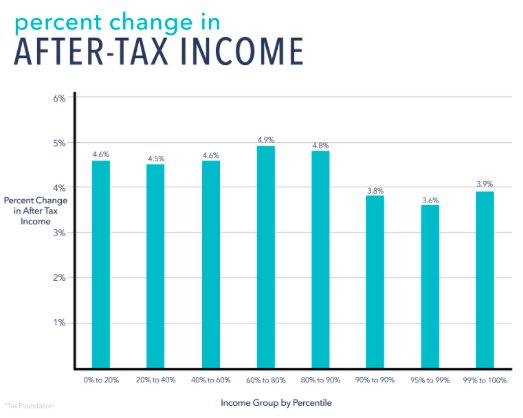 
Chart based on Tax Foundation's nonpartisan analysis of House GOP's reform bill shows after-tax income would rise across *all* income groups, on average. As a % of income, lower & middle income earners benefit more than the very rich:
_______________

Even the liberal Tax Policy Center's analysis -- which found that the benefits aren't as middle-class centric -- determined that "the legislation would reduce taxes on average for all income groups in 2018 and 2027" (emphasis mine).  A USA Today column that's largely critical of the Republican plan -- making the case that some families and businesses would be hurt by the proposal -- does allow that there would be some "winners" under the legislation.  Buried at the bottom of the piece, the would-be beneficiaries are listed.  This is the first bullet point:
________________ 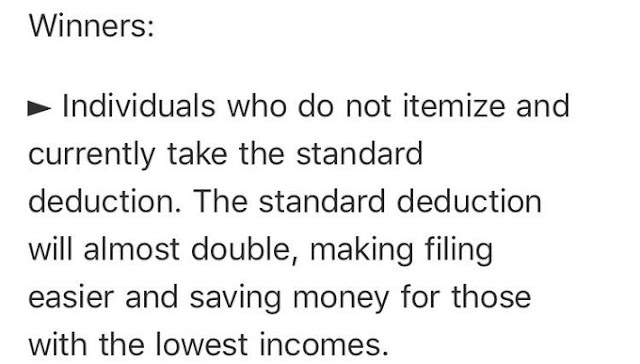 
✔ @guypbenson
USA Today column mostly attacking GOP tax reform plan includes a buried bullet point on 'winners' under the proposal. This describes *70%* of taxpayers, a number that's expected to rise to ~90% if the standard deduction is roughly doubled. That's a LOT of winners.


That's right: About 70 percent of all US taxpayers currently take the standard deduction, which would approximately double under the House-passed bill.  So right out of the gate, the vast majority of American taxpayers already stand to benefit from the bill.
Analysts predict that if the standard deduction increases dramatically, the percentage of filers who claim it (i.e., eschewing itemizing) will rise to the ballpark of 90 percent.
A liberal activist on Twitter objected to my argument above, reasoning that some number of the new additions to the standard-deduction-taking ranks would still be worse off than they would be under the current system.
I replied by thanking him for confirming that at a minimum, somewhere between 70 and 90 percent of all Americans will be winners under the Republican proposal, and that's without considering the time and money-saving benefits of radical simplification.  The cost of tax compliance and preparation runs in the tens of billions each year.
As for Democrats' railing against corporate tax cuts, the US corporate tax rate is the highest in the industrialized world, and even President Obama favored lowering it.  Democrats were for job-creating corporate tax relief before they were against it.
Another argument you'll hear from the Left is that (at least under the Senate bill) the reductions for businesses are permanent, whereas they're temporary for families.  But that assumes Congress would allow a huge tax hike on the middle class when the new provisions are set to expire.
As we saw under Obama, the overwhelming majority of the Bush tax cuts were renewed.  Democrats do not have the political will to raise taxes on working families, even though that's what would be required to even partially pay for their single-payer healthcare scheme.  (It's no wonder the idea has
In other words, if tax cuts are scheduled to sunset in order to allow the legislation to pass muster within the budget rules, that potential sun-setting will only come to fruition if a hypothetical future Democratic Congress chooses to raise middle class taxes through inaction.
Would they dare?
I'll leave you with with this process observation about House leadership's big success, followed by Speaker Ryan's floor speech in support of the bill (his detailed policy defense starts around the 2:30 mark):
________________


Republican-held House has been borderline ungovernable for years. Passing this bill so quickly and easily is a stupendous achievement
___________


https://townhall.com/tipsheet/guybenson/2017/11/17/oops-this-liberal-attack-on-the-gop-tax-plan-accidentally-proves-how-many-people-it-would-benefit-n2410519?utm_source=thdailypm&utm_medium=email&utm_campaign=nl_pm&newsletterad=
Posted by Frances Rice at 9:44 AM