Trump Heads to Seoul, Bringing Him Near to Kim Jong Un’s Doorstep 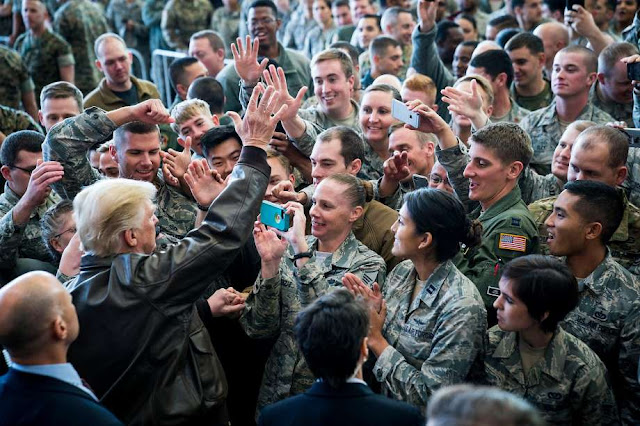 President Donald Trump departed Tokyo on Tuesday morning for a two-day visit to South Korea, bringing him near North Korean leader Kim Jong Un on a stop that will also feature talks on a trade deal he says hurts U.S. workers.
The second leg of his five-nation Asia trip includes a visit with U.S. troops, a joint press briefing with President Moon Jae-in and an address to South Korea’s parliament. In contrast to Trump’s warm relationship with Japanese Prime Minister Shinzo Abe, his dealings with Moon got off to rocky start due to differences over trade and dialogue with North Korea.
“Getting ready to leave for South Korea and meetings with President Moon, a fine gentleman,” Trump tweeted on Tuesday morning. “We will figure it all out!”
Trump and Moon are likely to show a united front against Kim, even while underlying tensions remain. South Korea hosts more than 28,000 U.S. troops and relies on the alliance to deter a North Korean attack.
Pyongyang’s accelerated missile and nuclear weapons program -- and a war of words between Trump and Kim -- have ratcheted up tensions in North Asia to the highest level in decades. Nowhere is that tension felt more acutely than in Seoul, with a metropolitan area of more than 25 million people and a location in striking range of the regime.
Trump won’t visit the demilitarized zone dividing South Korea and North Korea during his trip, a senior administration official said last week, describing it as a cliche. Except for George H.W. Bush, who visited the fortified border as vice president, all of Trump’s predecessors since Ronald Reagan have made the trip.
While Trump has threatened military action to stop Kim from acquiring the ability to strike the U.S. with a nuclear weapon, Moon has sought to reassure South Koreans that another war won’t break out. The South Korean leader wants to take the “driver’s seat” when it comes to the Korean Peninsula, including a quicker timetable on the U.S. military transferring operational control to his nation in wartime.
Former U.S. ambassador to South Korea Alexander Vershbow told Bloomberg TV that Trump will have a lot more heavy lifting to do with than he did with Abe, who has backed the U.S. president’s hard line on Pyongyang.
"This visit is a challenge for the president to persuade Moon Jae-in that we need to take a tough line but that he is leaving the door open ultimately to negotiations," Vershbow said from Washington. "Hopefully the president can convince president Moon we’re not going to rush into any military confrontation with the North, and we’re trying to use the pressure to get them give up their programs."
The U.S. has been considering whether to return North Korea to a list of state sponsors of terror, and Trump has signaled a decision will be announced soon. The nuclear threat is one of the biggest geopolitical challenges for his administration, and one of Trump’s major goals on his Asia visit is coordinating a response by the U.S., South Korea, Japan and China.
While the U.S. and South Korea look for ways to respond to North Korea, the question of the five-year-old trade deal known as Korus also hangs over talks between Trump and Moon. Trump has called the accord a “job killer” that costs the U.S. $40 billion a year, and has threatened to withdraw if South Korea doesn’t agree to terms that reduce America’s growing trade deficit with the country.
South Korea is the U.S.’s seventh-largest trading partner, while the U.S. is South Korea’s second-biggest partner after China. U.S. figures indicate its goods deficit with South Korea was $27.7 billion last year. Efforts to narrow the gap will probably focus heavily on the auto industry, meaning the administration may push to increase the number of American-made cars that can be sold in South Korea.
https://www.bloomberg.com/news/articles/2017-11-07/trump-heads-to-seoul-bringing-him-near-doorstep-of-kim-jong-un
Posted by Frances Rice at 10:17 PM