The Tax Reform Bill is Here 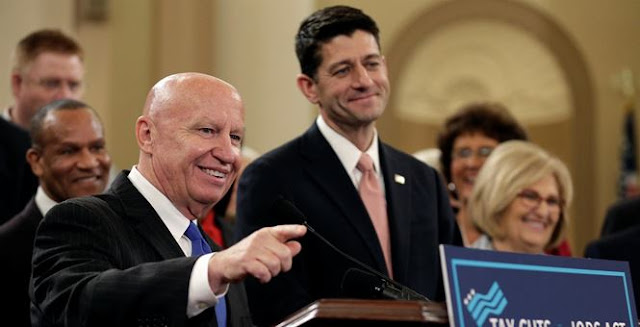 
Here are some of the details:
-401k plans remain untouched


-Corporate tax rate will be slashed to 20 percent


By Cortney O'Brien
Senate Democrats have been telling their constituents that the GOP tax reform plan will increase taxes on most middle class families.
That’s when the Washington Post chimed in to say hold up, wait a minute. In their fact check, they found that the Democrats were playing “a bad game of telephone.”
It all started when the Democratic Policy and Communications Committee released a report claiming the average tax increase on families nationwide earning up to $86,100 would be $794.
Top Democrats like Sen. Kamala Harris (CA) and Bob Casey (PA) ran with the numbers and posted them on their Twitter pages.
“On average, middle class families earning less than $86,000 would see a tax increase under the Republican “tax reform” plan,” Harris wrote (since deleted, it seems.)
The average tax increase on families nationwide earning up to $86,100 would be $794.00
— Senator Bob Casey (@SenBobCasey) October 24, 2017
As the WaPo explains, this talking point was swiped from a document first released from the Democrats on the Joint Economic Committee. In the original report, the committee explains that 8 million households that earn up to $86,100 will see a $794 tax increase. That “nuance was lost” once it got into the hands of the Democratic Policy and Communications Committee, who made it sound as if the tax increase would affect all working-class families.
The misconstrued talking point earns the Democrats Four Pinocchios.
"In their haste to condemn the GOP tax plan, Democrats have spread far and wide the false claim that families making less than $86,100 on average will face a hefty tax hike. Actually, it’s the opposite. Most families in that income range would get a tax cut. Any Democrat who spread this claim should delete their tweets and make clear they were in error."
The WaPo went a step further, noting a few positives of the GOP tax reform agenda.
Meanwhile, more than 97 million (80 percent) will receive a tax cut. Doing the math the same way the JEC staff did, we come up with an average tax cut of about $450 for those 97 million households.
https://townhall.com/tipsheet/cortneyobrien/2017/11/02/wapo-fact-checks-senate-dems-take-on-gop-tax-plan-n2403882
Posted by Frances Rice at 12:44 PM