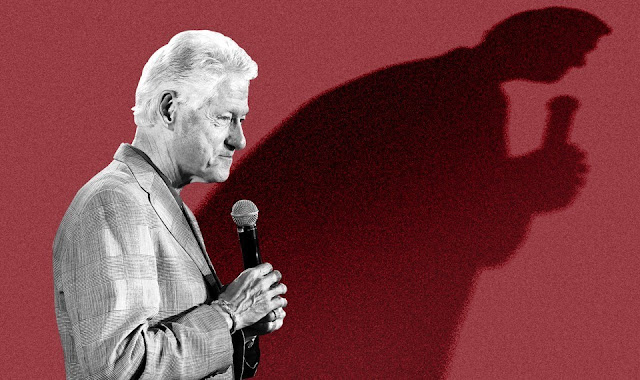 
Feminists saved the 42nd president of the United States in the 1990s. They were on the wrong side of history; is it finally time to make things right?
By Caitlin Flanagan 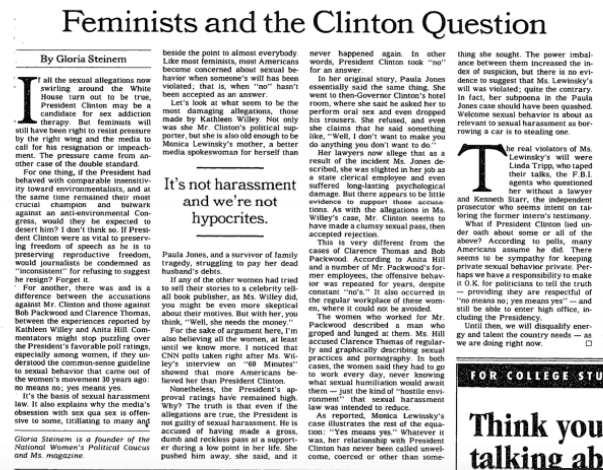 
Called “Feminists and the Clinton Question,” it was written in March of 1998, when Paula Jones’s harassment claim was working its way through court. It was printed seven days after Kathleen Willey’s blockbuster 60 Minutes interview with Ed Bradley.
If all the various allegations were true, wrote Steinem, Bill Clinton was “a candidate for sex addiction therapy.”
To her mind, the most “credible” accusations were those of Willey, whom she noted was “old enough to be Monica Lewinsky’s mother.”
And then she wrote the fatal sentences that invalidated the new understanding of workplace sexual harassment as a moral and legal wrong: “Even if the allegations are true, the President is not guilty of sexual harassment. He is accused of having made a gross, dumb, and reckless pass at a supporter during a low point in her life. She pushed him away, she said, and it never happened again. In other words, President Clinton took ‘no’ for an answer.”
Steinem said the same was true of Paula Jones.
These were not crimes; they were “passes.”
Broaddrick was left out by Steinem, who revealed herself as a combination John and Bobby Kennedy of the feminist movement: the fair-haired girl and the bareknuckle fixer.
The widespread liberal response to the sex crime accusations against Bill Clinton found their natural consequence 20 years later in the behavior of Harvey Weinstein: Stay loudly and publicly and extravagantly on the side of signal leftist causes and you can do what you want in the privacy of your offices and hotel rooms.
But the mood of the country has changed. We are in a time when old monuments are coming down and when men are losing their careers over things they did to women a long time ago.
When more than a dozen women stepped forward and accused Leon Wieseltier of a serial and decades-long pattern of workplace sexual harassment, he said, “I will not waste this reckoning.” It was textbook Wieseltier: the insincere promise and the perfectly chosen word.
The Democratic Party needs to make its own reckoning of the way it protected Bill Clinton.
The party needs to come to terms with the fact that it was so enraptured by their brilliant, Big Dog president and his stunning string of progressive accomplishments that it abandoned some of its central principles.
The party was on the wrong side of history and there are consequences for that.
Yet expedience is not the only reason to make this public accounting.
If it is possible for politics and moral behavior to coexist, then this grave wrong needs to be acknowledged.
If Weinstein and Mark Halperin and Louis C.K. and all the rest can be held accountable, so can our former president and so can his party, which so many Americans so desperately need to rise again.
https://www.theatlantic.com/entertainment/archive/2017/11/reckoning-with-bill-clintons-sex-crimes/545729/
Posted by Frances Rice at 10:59 PM