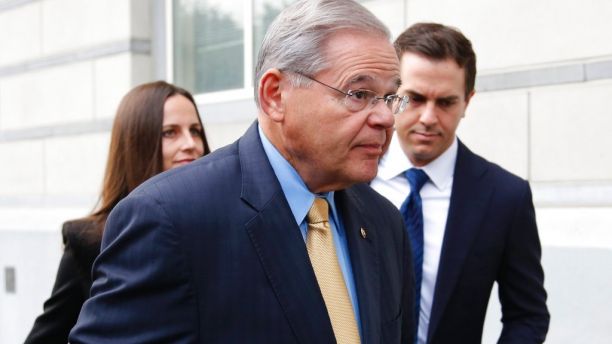 Sen. Bob Menendez, D-N.J., arrives to the courthouse with his children in Newark, N.J., on Sept. 6, 2017 as the corruption trial begins.  (AP Photo/Seth Wenig)
Prosecutors said the hooker allegations against Sen. Bob Menendez 'were not so easily disprovable as the defendants suggest.'
Sen. Robert Menendez may have had sex with underage hookers in Dominican Republic: prosecutors
By Dan Friedman
WASHINGTON — Federal prosecutors said Monday that they aren’t convinced claims U.S. Sen. Robert Menendez cavorted with underage hookers – widely seen as discredited – are false.
Lawyers for the New Jersey Democrat last week asked a federal judge to dismiss charges that the senator took bribes from a Florida eye doctor, Salomon Melgen, and in exchange used his power to do business and personal favors for him.
Prosecutors said the hooker allegations against Sen. Bob Menendez 'were not so easily disprovable as the defendants suggest.'
The defense said the case is bogus because it sprang from "easily disprovable" claims that Menendez slept with underage prostitutes while hosted by Melgen at a Dominican Republic villa.
Three women who made the prostitution allegations later recanted and said they were paid to level the charges. Neither Melgen nor Menendez was charged with soliciting underage prostitutes.
But in a motion Monday asking the judge to ignore the defense arguments, Justice Department lawyers say the hooker allegations "were not so easily disprovable as the defendants suggest."
Prosecutors used the defense claims to highlight previously undisclosed tidbits on Menendez's pursuit of younger woman.
The lawyers say their investigation resulted from "specific, corroborated allegations that defendants Menendez and Melgen had sex with underage prostitutes in the Dominican Republic."
Menendez’s camp said Monday that the Justice Department filing is a smear tactic designed to use the exchange of motions to dump dirt on the senator.
“The filing today shows that the Department of Justice tried to make up for weak allegations about public corruption by soliciting allegations about sex,” said Menendez spokesman Steven Sandberg. “They continue that refrain now with new salacious allegations, again having nothing to do with the actual charges in the case.”
“There is not one interview, paper, email or grand jury witness—not a shred of any evidence—that says Senator Menendez was involved in any prostitution, let alone underage women,” Sandberg said. “Period. And the government knows it.”
The filing discloses circumstantial information indirectly linking Menendez to prostitutes. The prosecutors noted eyewitness testimony that Melgen, 61, attended a party that included prostitutes, and that he knew "numerous young women" to the Dominican Republic on his private jet.
"Many of these young women receive substantial financial support from defendant Melgen," prosecutors say.
Melgen flew two strippers he met at a South Florida "Gentleman's Club" to his villa after paying them a combined $3,000, the government says.
A pilot described a series of "young girls" who "look like escorts" on Melgen's plane, prosecutors wrote.
"Some of the young women who received substantial sums of money from defendant Melgen were in the same place as defendant Menendez at the same times," the government notes.
Prosecutors say that when the allegations about hookers surfaced, Menendez lied, making the "demonstrably false" claim that he'd only flown on Melgen's plane three times.
Menendez's defense complained that prosecutors "flooded the grand jury proceedings with inflammatory questions regarding sexual relationships, affairs, lavish gifts which are unrelated" to the charges he faces.
But prosecutors said they "did not interview or subpoena all of" Melgen or Menendez's girlfriends.
They called only those who were involved in the corrupt exchange where Menendez used his power to help "Melgen bring his foreign girlfriends into the United States," while Melgen used his wealth to help "Menendez take his American girlfriends on exotic overseas vacations."
To Menendez's claim that they went out of their way to imply he had an improper relationship with a female staffer, prosecutors noted the aide stayed with Menendez at Melgen's villa twice, and knew there with the senator on Melgen's jet. Those are flights "Menendez did not pay for or report, and continued to conceal after the allegations surfaced," prosecutors said.
http://www.sandiegouniontribune.com/news/nation-world/sd-me-menendez-case-20171012-story.html
_______________


Menendez corruption and bribery trial: What to know
By Kaitlyn Schallhorn | Fox News
Jurors in Sen. Bob Menendez's corruption and bribery case told the judge Monday that they "can't reach a unanimous verdict on any of the charges."
The judge sent the jury home for the day and told them to return on Tuesday to continue deliberations. The decision came after the judge had to speak with individual jurors about comments a dismissed juror made to the media over the weekend.
The New Jersey Democrat is accused of accepting a plethora of donations and gifts from a wealthy friend in exchange for political influence. Both Menendez and the doctor, Salomon Melgen, have maintained their innocence.
It’s the first time in nine years that a sitting U.S. senator is facing a federal bribery charge.
What is Menendez accused of?
Menendez, 63, accepted an abundance of campaign donations, gifts and vacations from Salomon Melgen, a Florida ophthalmologist. In return, Menendez used his position to lobby on behalf of Melgen’s business interests, according to prosecutors.
Melgen allegedly directed more than $750,000 in campaign contributions to entities that supported Menendez, according to the indictment, which prosecutors said were inducements to get Menendez to use his influence on Melgen's behalf. Prosecutors have also accused Menendez of trying to hide the gifts.
Melgen paid for Menendez and his girlfriend to stay for three nights at a Parisian hotel where rooms typically cost about $1,500 per night and allowed the senator the use of his private jet, according to prosecutors.
Federal prosecutors said that Menendez “sold his office for a lifestyle that he couldn’t afford.”
The indictment also alleged that Menendez pressured State Department officials to give visas to three young women described as Melgen's girlfriends.
What is the senator’s defense?
Both Menendez and Melgen have pleaded not guilty – and Menendez has vehemently denied the accusations against him.
Throughout the trial, defense attorneys sought to prove that Menendez and Melgen have been friends since before the former became a senator, and the trips were nothing more than friends traveling together.
At times emotional, Menendez has maintained his innocence throughout the trial.
What has happened in the trial so far?
Defense attorney Raymond Brown got into a spat with U.S. District Court Judge William H. Walls at the start of the trial. Brown accused Walls of being “extremely prejudicial to the defense.”
Walls had denied Menendez’s request that the trial be recessed during critical Senate votes, stating that his job should not be treated differently from that of a construction worker or cab driver.
The trial has also focused on a meeting former Senate Majority Leader Harry Reid, D-Nev., set up with Menendez and former Health and Human Services Secretary Kathleen Sebelius to discuss a nearly $9 million Medicaid billing dispute.
Sebelius testified in court that the incident was the first time in her role in government that she was asked by a senator to take a meeting with another senator. She said that Melgen wasn’t specifically mentioned in the meeting but that she assumed his case was the topic.
Prosecutors didn’t call Reid to testify before it rested its case on Oct. 11.
Walls declined to throw the case out despite the defense’s objections that the accusations against Menendez didn’t fit the narrow definition of bribery that was a result of a 2016 Supreme Court decision.
Menendez also had a little help from his friends.
Sen. Lindsey Graham, R-S.C., arrived at the Newark courthouse to testify as a “character witness” for the Democratic senator, Graham’s office confirmed. He testified about his experiences with Menendez in the Senate, “unrelated to the underlying charges,” his office said.
"In very difficult circumstances he always keeps his word," Graham, said during his testimony. "A handshake is all you need from Bob. He's a very honest, hardworking senator."
Sen. Corey Booker, D-N.J., has also appeared in support of Menendez.
Menendez was also emotional when he was asked by reporters about his colleagues’ support.
Melgen, 63, was convicted of 67 counts of health care fraud in April in what the Palm Beach Post called one of the biggest Medicare fraud cases in the U.S.
During that case, prosecutors argued that Melgen, who was born in the Dominican Republic, robbed Medicare of as much as $105 million, according to the newspaper. His sentencing has been delayed until after this trial. 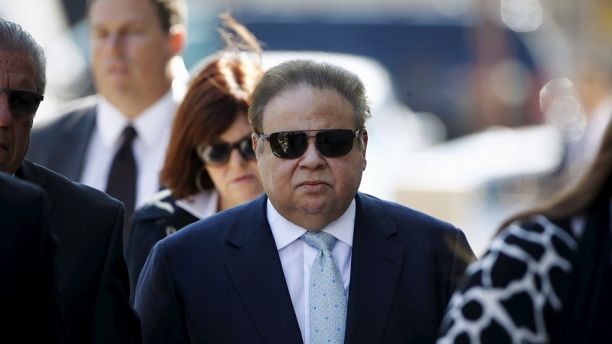 
Aside from Menendez, Melgen has given significant amounts of money to a variety of Democratic lawmakers, according to public records.
What happens if Menendez is convicted?
If Menendez is convicted and goes to prison, Gov. Chris Christie, R-N.J., would pick a replacement.
That prospect is troublesome for Democrats who fear that Christie would pick a Republican to fill the Senate seat – giving the GOP an additional edge for legislative fights.
Vice President Mike Pence has said that it would be "altogether inappropriate and wrong" for a convicted felon to remain in the Senate. However, he said it would be a decision left up to the Senate if Menendez didn't resign.
Menendez is up for reelection next year. He was selected to replace former Gov. Jon Corzine, D-N.J., in the Senate in 2005.
The most serious charges against the two men carry a maximum 20-year prison sentence.
Fox News’ Tara Prindiville and The Associated Press contributed to this report.
http://www.foxnews.com/politics/2017/11/13/menendez-corruption-and-bribery-trial-what-to-know.html
Posted by Frances Rice at 10:49 AM