She Said A Powerful Congressman Harassed Her. Here’s Why You Didn’t Hear Her Story. 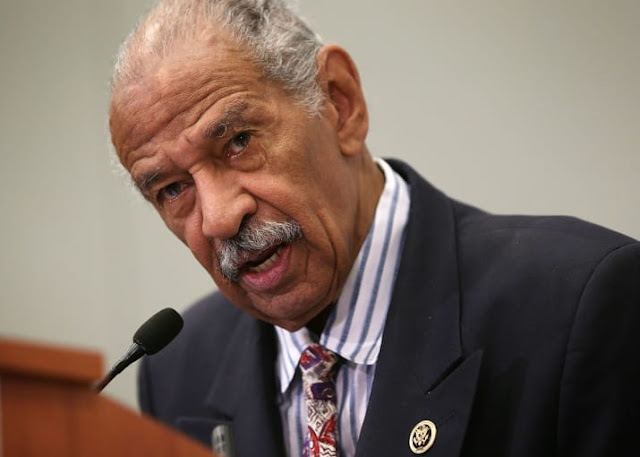 Alex Wong / Getty Images
Michigan Rep. John Conyers, a Democrat and the longest-serving member of the House of Representatives, settled a wrongful dismissal complaint in 2015 with a former employee who alleged she was fired because she would not “succumb to [his] sexual advances.”
Documents from the complaint obtained by BuzzFeed News include four signed affidavits, three of which are notarized, from former staff members who allege that Conyers, the ranking Democrat on the powerful House Judiciary Committee, repeatedly made sexual advances to female staff that included requests for sexual favors, contacting and transporting other women with whom they believed Conyers was having affairs, caressing their hands sexually, and rubbing their legs and backs in public. Four people involved with the case verified the documents are authentic.
And the documents also reveal the secret mechanism by which Congress has kept an unknown number of sexual harassment allegations secret: a grinding, closely held process that left the alleged victim feeling, she told BuzzFeed News, that she had no option other than to stay quiet and accept a settlement offered to her.
“I was basically blackballed. There was nowhere I could go,” she said in a phone interview. BuzzFeed News is withholding the woman’s name at her request because she said she fears retribution.
Last week the Washington Post reported that Congress’s Office of Compliance paid out $17 million for 264 settlements with federal employees over 20 years for various violations, including sexual harassment. The Conyers documents, however, give a glimpse into the inner workings of the office, which has for decades concealed episodes of sexual abuse by powerful political figures.
The woman who settled with Conyers launched the complaint with the Office of Compliance in 2014, alleging she was fired for refusing his sexual advances, and ended up facing a daunting process that ended with a confidentiality agreement in exchange for a settlement of more than $27,000. Her settlement, however, came from Conyers’ office budget rather than the designated fund for settlements.
Congress has no human resources department. Instead, congressional employees have 180 days to report a sexual harassment incident to the Office of Compliance, which then leads to a lengthy process that involves counseling and mediation, and requires the signing of a confidentiality agreement before a complaint can go forward.
After this an employee can choose to take the matter to federal district court, but another avenue is available: an administrative hearing, after which a negotiation and settlement may follow. 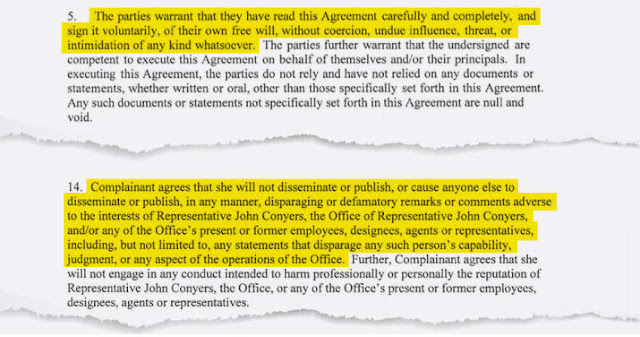 Via documentcloud.org
Some members of Congress have raised major concerns with the current system over the years, but the calls for an overhaul have grown louder in the post-Weinstein era. Members have argued that 90 days is too long to make a person continue working in the same environment with their harasser; that interns and fellows should be eligible to pursue complaints through this process; and that it is unfair for a victim to have to pay for legal representation while the office of the harasser is represented for free by the House's counsel.


In this case, one of Conyers’ former employees was offered a settlement, in exchange for her silence, that would be paid out of Conyers’ taxpayer-funded office budget. His office would “rehire” the woman as a “temporary employee” despite her being directed not to come into the office or do any actual work, according to the document. The complainant would receive a total payment of $27,111.75 over the three months, after which point she would be removed from the payroll, according to the document. 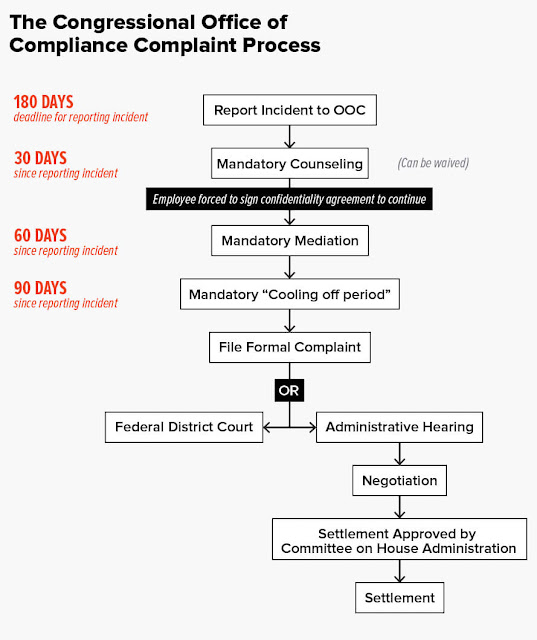 
"Speaker Boehner was not aware of this," Dave Schnittger, a spokesperson for John Boehner, told BuzzFeed News in an email Tuesday. Boehner was the speaker of the House when the settlement was made.
Speaker Paul Ryan's called the story "extremely troubling" in a statement the morning after the story broke.
"A Committee hearing last week examining this issue led to a new policy of mandatory training for all members and staff," Ryan said. "Additional reforms to the system are under consideration as the committee continues its review. People who work in the House deserve and are entitled to a workplace without harassment or discrimination.”
The documents also show that there was a belief among at least some staffers that the office was a jealous environment. Some of the documents allege Conyers offered his protection when staff would complain to him about management in the office. 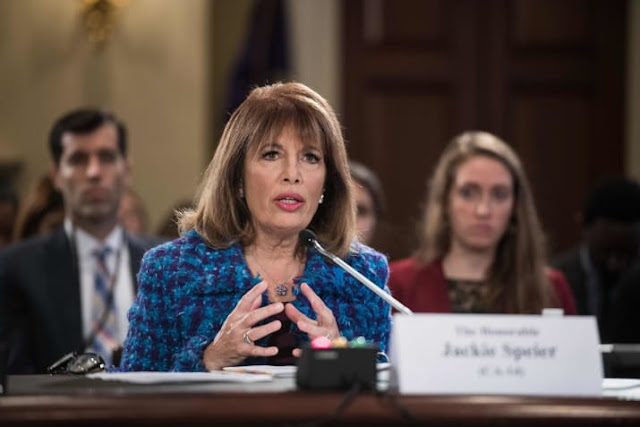 
Rep. Jackie Speier speaks during a House Administration Committee hearing on preventing sexual harassment in the congressional workplace, November 14.
California Democrat Rep. Speier and colleagues in the House and Senate have introduced legislation that would overhaul the complaint process, including requiring the Office of Compliance to publicly name the office of any member who enters into a settlement. The bill would also allow complainants to waive mediation and counseling, set up a victims' counsel, and require all congressional offices to go through harassment training every year.
Conyers’ office has a history of ethical run-ins. In 2016, his former chief of staff Cynthia Martin pleaded guilty to receiving stolen property after she refused to reimburse $16,500 that was mistakenly deposited in her account. A preliminary investigation by the Office of Congressional Ethics found that Conyers continued to pay Martin more than $13,000 per month when she was supposedly on unpaid leave.
In 2006, two former aides complained that Conyers made them babysit his children, run errands, and work on his reelection campaign while drawing their congressional salaries. There was also a bizarre incident in 2005 when 60 Thanksgiving turkeys, given to his staff to disperse to people, may have gone missing.
Conyers’ wife, former Detroit city councilor Monica Conyers, was sentenced to three years in prison over bribery charges in 2010. (One of the documents alleged Conyers began “aggressively acting out his sexual harassment behavior” following this.) Last year the couple renewed their vows.


https://www.buzzfeed.com/paulmcleod/she-complained-that-a-powerful-congressman-harassed-her?utm_term=.bgv68lxX9J#.sad3GkoDvW
Posted by Frances Rice at 10:38 AM