By The WSJ Editorial Board 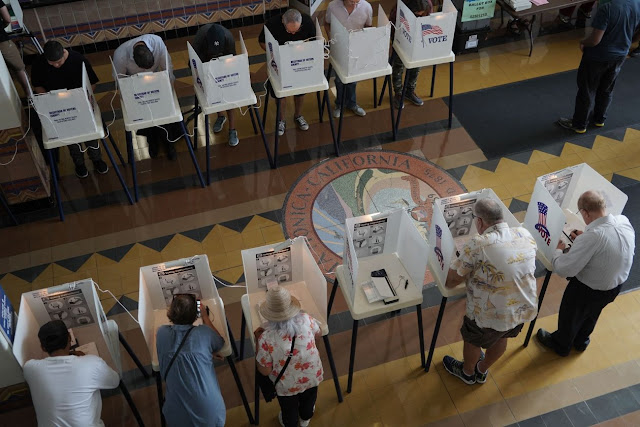 Liberals want to impose the California voting model on all 50 states.

Democrats in Congress are making election reform their top legislative priority, and we’ve criticized it as a majority protection act. To understand why, consider that Democrats are trying to do for the country what they’ve done with election laws in California.

The Golden State is where Republican candidates went to bed on election night in November with leads in most of their competitive House races, only to lose in the ensuing weeks of vote counting.

In Orange County, Young Kim was poised to become the first Korean-American woman in Congress, with a sizable lead on Election Day over her Democratic opponent. She lost by three percentage points. Republican Rep. Mimi Walters’s 6,074-vote lead on Nov. 6 turned into an 11,866-vote loss to Democrat Katie Porter.

The GOP wipeout came after the Democrats who dominate Sacramento passed laws aimed at greasing their voting machine. The project started in 2015 when California became the second state after Oregon to move to automatic voter registration.

Can’t be bothered to register? California does it for you, automatically adding to its rolls any person who has any interaction with its Department of Motor Vehicles. The system is already a threat to ballot integrity, with the DMV acknowledging in September it had incorrectly registered 23,000 voters.

In 2016 California passed the Voter’s Choice Act, which allows counties to mail every voter a ballot. Lots of Californians use mail voting, though previously they had to request it. Now ballots arrive automatically, whether voters want one or not. Thirteen million California voters received ballots in the mail last year, compared to about nine million in 2014.

The biggest score for Democrats is a separate 2016 law pushed heavily by unions that legalized what’s known as ballot harvesting. This allows any person—union activists, canvassers, community organizers, campaign staff—to show up at homes and collect mail ballots on behalf of voters.

California law also allows counting mail ballots postmarked or delivered on Election Day, as well as same-day registration and liberal use of provisional ballots. This year the Democratic vote totals piled up long after the polls closed. Fred Whitaker, chairman of the Orange County GOP, has estimated that an extraordinary 250,000 mail-votes were dropped off on Election Day thanks to harvesting.

All of this is carefully designed to enhance Democratic turnout. Media stories have detailed a sophisticated operation that pinpointed Democratic voters and deployed volunteers to harvest door-to-door. Republicans struggled to get conservatives to hand ballots over to strangers, and Democrats can’t be blamed for better organization.

But California law also creates opportunity for fraud and coercion. Voters in a 2017 special election for an open seat in the California state Assembly reported activists harassed them at their doors to fill out ballots for specific candidates and hand them over.

This creates opportunities for harvesters to “help” voters complete their ballots, or even pay to finish them, and it’s easy for the unscrupulous to lose ballots they think may go for the wrong candidate. This is why ballot harvesting is illegal in many states, or at least limited to drop-offs by family members.

House Democrats are now moving to impose much of this on the other 49 states. Their For the People Act, or H.R.1, would require all states to adopt automatic voter registration based on names in state and federal agency databases. This means anyone receiving federal food stamps in, say, Ohio, would be automatically registered to vote.

The bill also requires states to allow same-day and online voter registration. It mandates looser rules on provisional ballots, requires every state to provide two weeks of early voting, prohibits restrictions on mail voting, and limits states’ ability to remove voters from rolls. Oh, and it will require that the United States Postal Service deliver ballots for free. Vote harvesting isn’t in H.R.1 but give Democrats time.

All this is an affront to the American tradition of letting states set their own election rules. Few states have automatic registration, on the principle that voting is voluntary. Even liberal Slate magazine, in suggesting that the House bill would “Save American Democracy,” acknowledged that some of the bill might not survive Supreme Court scrutiny.

California has become a one-party state, and Democrats have used their dominance to make it even harder for Republicans to compete. Now they want to use their new House majority to do the same for the rest of America. The Senate can stop them for now, but look out in 2021.