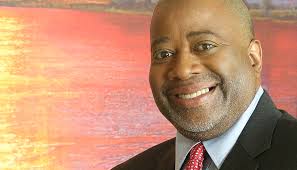 Truly amazing is the fact that Raynard Jackson, a well-known Black Republican Trump supporter, was nominated for a Pulitzer Prize for his column with the title: “Hypocrisy in the Democrat Democracy” that focused on Democrat Party racism towards Blacks.

This historic Pulitzer Prize nomination is a major step in the quest to hold the Democratic Party accountable for that party’s racism, past and present. As author Michael Scheuer wrote, the Democratic Party is the party of the four S’s: slavery, secession, segregation and now socialism.

For more details, see the article posted on this Blogsite with the title: “Republicans and Democrats Did Not Switch Sides On Racism.”

Below is the press release from the company Jackson founded, "Raynard Jackson & Associates, LLC," which announces his Pulitzer Prize nomination.

Team Raynard Jackson & Associates, LLC is happy to announce that its founder, Raynard Jackson, was nominated last week for the prestigious Pulitzer Prize Award under the category for “Commentary.”

The Pulitzer Prize is considered one of the highest honors for anyone involved in the news industry. According to Jackson, “I am not a journalist. I am a columnist but I am thrilled that the New Pittsburgh Courier newspaper deems my writings worthy of consideration for the Pulitzer Prize.”

The column that was submitted for consideration was titled: “Hypocrisy in the Democrat Democracy.”  The column focused on the racism emanating from the Democrat Party towards Blacks.

Many consider Jackson to be one of the top Republican operatives in the country and think he provides a very unique voice that deserves to be heard. He uniquely speaks directly to the Black community and America in general, in a way that actually causes many Blacks to rethink their political alliances.

Former long-time Washington Post reporter, Mike Fletcher, said about Jackson’s writings, “I don’t always agree with Raynard, but in a world of recycled talking points, his columns are consistently original, well-reasoned, and provocative.”

His columns are syndicated nationally to more than 200 newspapers through the National Newspaper Publishers Association (NNPA).

As a long-time Republican and ardent Trump supporter, Jackson’s writings bring context to a lot of the political issues impacting the Black community in such a manner that even if you disagree with his position; at least he shows you a thoughtful alternative view.

Jackson stated, “My goal is not to get you to agree with my writings; but rather to get you to consider another perspective.  If I achieve that, my job is done.”

Jackson is a native of St. Louis, MO and cut his political teeth on the presidential campaign of then Vice President George H.W. Bush; who is responsible for Jackson moving to Washington, DC in the 1980s.

He has a B.S. degree in Accounting from Oral Roberts University in Tulsa, OK and a M.A. from George Mason University in Fairfax, VA.

We, at team RJA, are proud of our founder and hope you will join us in congratulating Raynard for this well-deserved recognition.

Founder and Chairman of Black Americans for a Better Future (BAFBF), a federally registered 527 Super PAC established to get more Blacks involved in the Republican Party.  We focus on the Black entrepreneur.
_________________

Hypocrisy in the Democrat Democracy

The Democrat Party is supposed to be the “hip” party when it comes to the Black community.  They have all the A-list Black celebrities from sports and entertainment in their back pocket and many of the supposed liberal Black “journalists” who claim to be objective in their reporting.

As opposed to referring to the Democrat Party as the “hip” party, I think a better term for them is the “hypocrisy” party when it comes to the Black community.

Eight years ago, I wrote a column about how the Democrat Party and its leaders constantly screw over Blacks when it’s time to reward Blacks for their loyalty.

The target of this Democrat racism always seems to be aimed at Civil Rights icon and South Carolina Congressman, Jim Clyburn.

I have known Congressman Clyburn and his longtime, extremely capable chief of staff, Yebbie Watkins for many, many years.  They know that I am a Republican, but they have never let that get in the way of our friendship.  They know if I can ever be helpful to them that I will always deliver for them; and they have always been willing to be helpful to me.

Clyburn is not a man of many words and rarely does a lot of media; so, when he does speak out publicly on any issue, it usually carries a lot of weight.

Last two weeks ago, Clyburn accused his fellow Democrats of using “racial dog whistles” in their attempt to defeat him in his bid to become Majority Whip of the House, a position he once held from 2007-2011.

In a McClatchy newspaper interview Clyburn stated: “I don’t know where it’s all coming from [the racial dog whistles]; but someone came to me over the weekend and told me that (they heard), when I was whip before, I was a figurehead.

What do you mean, I was a figurehead? Nothing could be further from the truth.  The little dog whistles that have been floating around this side for a long time [regarding him being a figurehead, thus implying that he was merely a token and not qualified for the job].”

Wait!  I thought Republicans were the ones that was supposed to be racist and used dog whistles that have now morphed into bullhorns.

Radical liberal media outlets like CNN, MSNBC, the Washington Post, the New York times, Black America Web, and the Huff Post have been portraying Republicans in this manner for decades.  Liberal Black journalists and pundits have made a career of branding my party as racist.

Left-wing extremist groups like the NAACP, the National Urban League, National Action Network, and the Congressional Black Caucus see racism in everything Republicans do; but suddenly turn into Stevie Wonder when it comes to racism within the Democrat Party.

Conspiracy journalists like Roland Martin, Joe Madison, Joy Reid, Laura Coates, Karen Hunter, Jason Johnson and sista girl pundit Angela Rye seem to have an opinion about everything other than the racism that Clyburn is constantly subjected to by their own party.

Clyburn is a living legend and though we disagree on almost every political issue, I have nothing but supreme respect for him and his legacy.

The NAACP rightly criticized Republican senator from Mississippi, Cindy Hyde-Smith for her ignorant comment about hangings, but came down with a severe case of laryngitis when it came to Clyburn.

Derrick Johnson, Marc Morial, Al Sharpton, Cedrick Richmond, I know a doctor who specializes in treating those with political laryngitis.  The typical cure for such a disease is taking a glass of courage.

Roland, Joe, Joy, Laura, Karen, Jason, and Angela, I know a doctor who specializes in treating people with Pelosi-itis.  The typical cure for such a disease is called growing a spine!

Why is it that Pelosi nor Hoyer has made one public word of support for Clyburn?  And our old friend Maxine Waters claims to be so big, bad, and tough; but she is too afraid to challenge her own party over racism that is quite obvious.

Where is Kamala Harris?  She is supposed to be the champion of all things Black when it comes to racism by whites.  She has not uttered one single word of support for Clyburn.

Oh, and where is our old pal Cory “Spartacus” Booker?  He usually has verbal diarrhea; but now all of a sudden he seems to have a severe case of verbal constipation.

The Black Caucus has the largest voting block (48 members) in the Congress and has the power to determine who the next speaker is if they had any balls.

These media appointed Black leaders only see racism when it comes from Republicans; but can’t bring themselves to stand up on principle when the same racism emanates from within the Democrat Party.

When all is said and done, there is more said than done!

Raynard Jackson is founder and chairman of Black Americans for a Better Future (BAFBF).

https://newpittsburghcourieronline.com/2018/12/06/hypocrisy-in-the-democrat-democracy/
Posted by Frances Rice at 11:36 AM