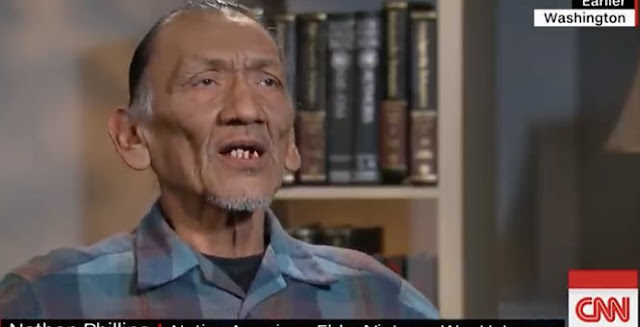 This is becoming embarrassing.

One story came from BuzzFeed, which alleged that President Donald Trump directed his ex-personal lawyer Michael Cohen to lie about a real estate deal in Russia. The Mueller investigation refuted that claim.

Then, we have this Covington Catholic High School students wearing MAGA hats hounded a Native American story, which was refuted by video evidence.

The students weren’t chanting, “build the wall” either.  They were doing sports chants to drown out the obscenities hurled at them by a bunch of Black Hebrew Israelites.

Nathan Phillips, the Native American man in the video, was the one who approached the group of teens.

It’s a rather innocuous story, but the media saw MAGA gear and went insane.

White, Catholic, and pro-Trump—these kids have to be destroyed. To grease up the outrage machine, Phillips’ military record was brought up, but there appears to be an issue with his service timeline.

There is no doubt he is a veteran but was he in Vietnam? No, no he wasn’t. He uses the vague “Vietnam times” veteran, which is just ridiculous. He was stateside during his time in the Marine Corps, never rising above the rank of private in that time span.

The Washington Post tried to run interference on this part of the story, reporting that a group representing Phillips said there is no evidence that he said he was a Vietnam War veteran. The Lakota People’s Law Project, who represent Phillips, added that they mistakenly said that he was in a press release.

In reality, Phillips served from June 1972 to May 1976 in the Marine Corps Reserve, a service spokeswoman, Yvonne Carlock, said Wednesday. He did not deploy, and he left the service as a private after disciplinary issues. From October 1972 to February 1973, he was classified as an antitank missileman, a kind of infantryman, Carlock said. He then became a refrigerator technician for the majority of his service.

Daniel Paul Nelson, a leader in the Lakota People’s Law Project, said in an interview that his group made the error and that Phillips never told the group he served in Vietnam.

With all the scrutiny of Phillips’s military record, he has now been victimized twice, Nelson said.

“It’s definitely a distraction,” he said. “It’s a diversion, in fact. I’d like to make the point that these papers being released demonstrate the most important fact, which is that he was in the military. He did not lie about that, and there are a lot of people who have been in a very irresponsible and vicious manner targeting him without being able to prove that.”

Even the author of the Post piece had to tweet it out, noting that Phillips wasn’t making accurate remarks.

The liberal media has eaten so much trash over the past ten days. It’s ridiculous.

I wish I could say stop sucking, but the anti-Trump pathogen might be too tough to flush out of the Left’s system. They just keep stepping on rakes.