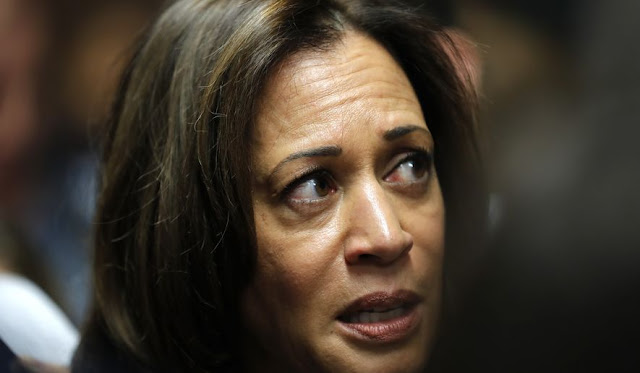 When you look at the Senate Democrats who have announced their presidential campaigns so far, you notice that each one has a theme.

For example, Sen. Elizabeth Warren, D-Mass., has made her career about reform of the financial industry. Sen. Kirsten Gillibrand, D-N.Y., has made hers about preventing workplace sexual harassment. Sen. Sherrod Brown, D-Ohio, who has all but announced his candidacy with his tour of Iowa, has made his campaign about what Democrats still have to offer the working class.


But what about Sen. Kamala Harris, D-Calif., who announced her candidacy on Monday?

Look only at her two years in the Senate and two relevant data points pop up.

First, there’s her recent attempt, along with Sen. Mazie Hirono, D-Hawaii, to apply an anti-Catholic religious test to a judicial nominee because he belonged to the Knights of Columbus. This was too much even for her fellow Democrats to bear — not a single one objected to a resolution that implicitly rebuked Harris and Hirono for their behavior.

The second relevant point is Harris’ conduct during the Justice Brett Kavanaugh hearings.

No, not the contentious second round of Kavanaugh hearings involving sexual misconduct allegations, but the relatively placid first round in early September.

During that process, Harris insinuated, through a line of questioning, that Kavanaugh had held a highly improper conversation about the Russia investigation with someone at the law firm President Trump had hired.

After casting this slanderous aspersion, Harris then knowingly lied to journalists in order to prejudice public opinion against Kavanaugh's nomination. She falsely assured reporters that she had "good reason" and "reliable" evidence that Kavanaugh had indeed discussed the Russia investigation with lawyers at Trump's firm.

Then, as it turned out, she didn't have any evidence at all.

She had been bluffing, the way unethical prosecutors do when trying to get people to plead guilty to offenses they didn't commit.

But this wasn’t some police interrogation room — it was a Senate committee hearing. Harris was thus exposed as a liar the moment her bluff was called.

But it illustrates how accustomed she already was to using prosecutorial power and access to the media to smear and bully the innocent and guilty alike.

These two incidents clearly indicate the kind of progressivism that Harris espouses. It is the same intolerant, authoritarian, by-any-means ideology that stretches back into her earlier career as a prosecutor and as attorney general of California.

As attorney general, Lara Bazelon wrote recently in the New York Times, Harris “fought tooth and nail to uphold wrongful convictions that had been secured through official misconduct that included evidence tampering, false testimony and the suppression of crucial information by prosecutors.” This fits with her more recent behavior.

Harris was also fond of overcriminalization.

She supported legislation that would jail the parents of truant children.

She strongly opposed criminal justice reform measures throughout her tenure in California. She also supported the Golden State’s unconstitutional law muzzling crisis pregnancy centers, which the Supreme Court struck down last year as a clear violation of the First Amendment and an attempt to criminalize the moral and political viewpoints of others.

Harris is now running under the motto, “For the People,” a legal reference that embodies her aspiration to become the nation’s prosecutor in chief.

Her nomination would be an odd turn for progressives to take, given their recent hostility toward all law enforcement.

On the other hand, it would fit perfectly with the Left's general desire to punish people who disagree with their views — whether it be Kavanaugh, Catholic students peacefully standing around at an anti-abortion demonstration, second lady Karen Pence's Christian school, the Little Sisters of the Poor, or Trump and everyone who works for him.

Harris is here, and she’s running, and she's everything scary about today’s intolerant Left. 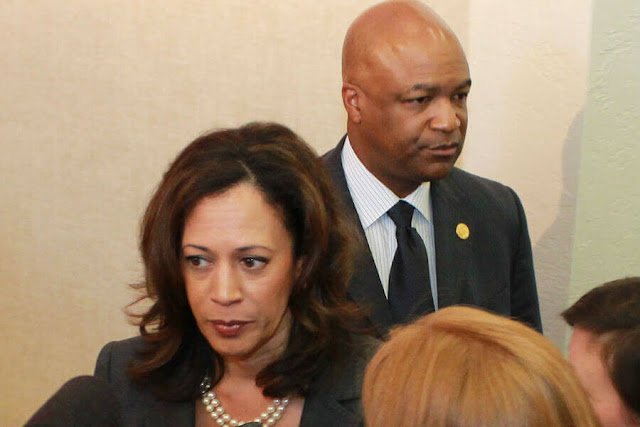 WASHINGTON – A longtime aide to Sen. Kamala Harris resigned Wednesday after the Sacramento Bee asked him about a 2016 harassment lawsuit he settled for $400,000.

The lawsuit was filed by the former executive assistant for Larry Wallace on Dec. 30, 2016, when he was working at the California Department of Justice under then-Attorney General Kamala Harris, the Bee reported. Harris, a Democrat, had just been elected to the Senate and was preparing to begin her work in Washington.

"We were unaware of this issue and take accusations of harassment extremely seriously. This evening, Mr. Wallace offered his resignation to the senator and she accepted it," Harris spokeswoman Lily Adams told USA TODAY in an email.

In her suit against the state Department of Justice, Danielle Hartley alleged that Wallace, a former Oakland police detective, "harassed and demeaned" her during her time as his assistant, which began in 2011, the Bee reported. She said he placed his printer under his desk and would ask her to get on her hands and knees to replace the paper or the ink on a daily basis.
Hartley claimed that Wallace often asked her to replace the paper in front of other male employees at the Division of Law Enforcement, according to the Bee. When she asked Wallace to move the printer, he refused.

The California Department of Justice denied Hartley's claims, but Xavier Becerra, who was appointed to replace Harris, settled the lawsuit on May 16, 2017, for $400,000, the Bee reported. As part of the settlement, Hartley signed a non-disclosure agreement and agreed not to apply for a job at the Department of Justice again.

Harris, who appears to be considering a 2020 presidential run, has been a vocal proponent of the #MeToo movement. She introduced a bill in June to address workplace sexual harassment, which included a ban on employers requiring workers to agree to non-disclosure clauses.