The Shaming of Karen Pence 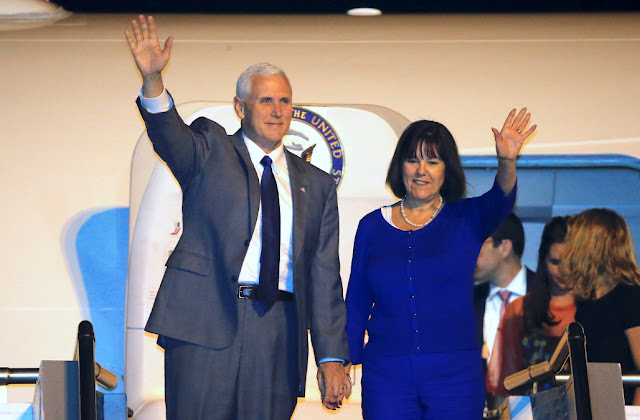 A mob of secular Puritans targets her for teaching at a Christian school.

Will no one speak up for Karen Pence other than her husband?

In scarcely a week, the vice president’s wife has become a public face of hate. CNN’s John King suggests that what Mrs. Pence has done is so grievous maybe taxpayers shouldn’t fund her Secret Service security protection.

The Guardian sees in Mrs. Pence a reminder of “the vice-president’s dangerous bigotry.”

During a Saturday night performance in Las Vegas, Lady Gaga told her fans that what Mrs. Pence has done confirms she and her husband are “the worst representation of what it means to be Christian.”

A former Washington Post editor and senior writer for Politico tweets: “How can this happen in America?”

So what is this terrible thing Mrs. Pence has done?

She plans to teach art part-time at Immanuel Christian School in Northern Virginia. This is a small private K-8 academy where Mrs. Pence has taught before.

It adheres to a biblically rooted view of human sexuality.

Thanks to the crack reporters at the Washington Post, what this means is no mystery.

The Post reports the following provision in the school’s employment contract:

“I understand that the term ‘marriage’ has only one meaning; the uniting of one man and one woman in a single, exclusive covenant union as delineated in Scripture.”

Hmmm. Though presented as dangerous stuff, we’ve heard this before.

For example, this is how Senate candidate Barack Obama put it in a 2004 radio interview:

So why are so many eager to cast the first stone against Mrs. Pence and not Mr. Obama?

Because everyone knew when Mr. Obama spoke he didn’t really mean it; his position was taken out of political calculation.

Mrs. Pence’s sin is that she really believes what she says.

In the narrow sense, the vilification of Mrs. Pence makes prophetic Justice Samuel Alito’s prediction in his dissent in Obergefell v. Hodges, the Supreme Court decision throwing out all state laws against same-sex marriage.

Justice Alito saw a perilous future for those who still embraced the view Mr. Obama once claimed to hold.

“I assume that those who cling to old beliefs will be able to whisper their thoughts in the recesses of their homes,” he wrote, “but if they repeat those views in public, they will risk being labeled as bigots and treated as such by governments, employers, and schools.”

In the larger sense the faith-shaming of Mrs. Pence exposes an inversion of tropes.

In history and literature, typically it has been the religious side that can’t tolerate the slightest disagreement from its dogma and behaves like outraged 17th-century Salemites when they think they have uncovered a witch.

Now look at the Immanuel Christian School. Those who run it know they and those who think like them are the big losers in America’s culture war. All they ask is to be allowed, within the confines of their community, to uphold 2,000 years of Christian teaching on marriage, sexuality and the human person.

When Obergefell was decided, it was sold as live-and-let-live.

But as Justice Alito foresaw, today some sweet mysteries of the universe are more equal than others.

In other words, it isn’t enough for the victors to win; the new sense of justice requires that those who still don’t agree must be compelled to violate their deepest beliefs, whether this means forcing the Little Sisters of the Poor to provide contraception or dragging a baker in Colorado through the courts until he agrees to make a cake celebrating “gender transition.”

Where the Puritans humiliated sinners with the stocks, the modern intolerant have Twitter .

Where the Amish shunned those who lived contrary to their beliefs, today’s violators find themselves driven off the public square.

And whereas in Hawthorne’s novel Hester Prynne was forced to wear a scarlet “A”—for adulterer—today we have folks such as Jimmy Kimmel using their popular platforms to paint the scarlet “H”—for hater—on people such as Mrs. Pence.

Vice President Mike Pence defended both his wife and Christian education during an appearance last Thursday on EWTN, a Catholic television network.

But it says something that so few on the commanding heights of our culture have been wiling to join him there.

It would be a shame if Mrs. Pence were to allow the mob to keep her from teaching art to those children at Immanuel Christian School.

But however it turns out, her experience surely tells us which orthodoxies today are truly sacred and beyond question.