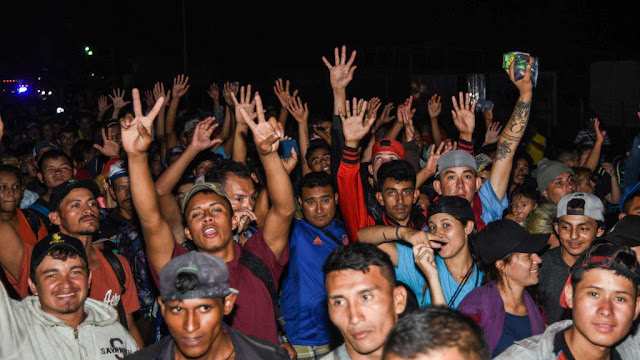 In the 19th century, savvy American saloon-owners offered free lunches to attract noontime patrons. Inevitably, the diners would get thirsty and buy expensive drinks—thus was born the expression, “there’s no such thing as a free lunch.” Despite its humble origins, the phrase captures a deep and omnipresent truth: everything has a price, an opportunity cost, a trade-off.

This is as true of lunches as it is of America’s immigration policy. Although The Economist‘s propaganda-artists claim otherwise, mass immigration does not enrich all Americans. There are obvious winners and losers. The winners are wealthy Americans and the immigrants themselves; the losers are everyone else, especially the working class, Millennials, and black Americans.

In short: mass immigration, legal and illegal, disproportionately hurts black Americans because they are the ones most likely to compete directly with immigrants for work.

At the Hot Gates

A great mob of men marches towards our southern border—thousands strong and growing daily. All eyes are on them. But what do they matter? As of Tuesday, the number had grown to an estimated 14,000 people. But the size of this particular group is insignificant compared to the tens of millions who already reside within our borders.

Before we can begin assess the economic impact of illegal immigration, we need to wrap our heads around just how many aliens live in America already. Pew Research estimates that some 11.1 million illegals reside within our borders. Although this falls in line with figures from the Department of Homeland Security, many—myself included—believe the true figure is much higher.

There are two reasons for this. First, the “official” figures do not include the children of illegal immigrants who were born in America—the “anchor babies.” Although natural-born citizens, these individuals are only here and only “Americans” because of their parents’ illegal activity.

Can we blame them for their parents’ actions? No. But there’s no denying that the addition of 6.5 million children is a burden on our welfare state and educational system—especially since their parents contributed nothing toward its creation, and now contribute very little toward its operating costs.

Second, the official aggregate figures (suspiciously) plateau around 2007. The explanation is that after 2008 the number of migrants fell and deportations rose to a point of equilibrium. There is little evidence that migration rates fell, however, and the reason deportations increased is that the Obama Administration simply changed the definition of “deportation” to inflate the numbers.

If the official figures are flawed, then just how many illegal aliens reside in America?

A relatively recent study conducted by Dr. Mohammad Fazel Zarandi of the Yale School of Management estimates that some 22.8 million illegal immigrants live in the United States. This figure draws upon more recent data and a variety of (sometimes-ignored) sources, and is likely more accurate than estimates from Pew or the DHS.

Regardless of which estimate we use, the impact of illegal immigration is magnified because alien populations are heavily concentration in a number of specific states and cities. For example, California alone is home to nearly one-in-four illegal migrants, and the majority of these live in the Greater Los Angeles area. Meanwhile, cities like St. Louis and states such as North Dakota have very few illegal aliens.

To sum up: there are at least 22.8 million illegal aliens in America, and they are heavily concentrated in a few particular urban areas.

In 2008, Vernon Briggs, Emeritus Professor of Labor Economics at Cornell University, testified before the U.S. Commission on Civil Rights. He stated matter-of-factly that there was “little doubt” that black Americans are the “major loser” in the immigration equation. Briggs explained:

Because most illegal immigrants overwhelmingly seek work in the low skilled labor market and because the black American labor force is so disproportionately concentrated in this same low wage sector, there is little doubt that there is significant overlap in competition for jobs in this sector of the labor market. Given the inordinately high unemployment rates for low skilled black workers…it is obvious that the major loser in this competition are low skilled black workers.

Basically, illegal migrants generally work low-wage jobs—the very jobs so many black Americans tend to work. Likewise, both aliens and blacks tend to reside in major cities. Taken together, this means that migrants and black Americans compete directly for the same jobs, which reduces wages and employment opportunities.

Unfortunately, black Americans fare worse in this head-to-head struggle because illegal aliens often work under-the-table for less than minimum wage and forgo expensive employer-provided healthcare plans. They undercut the labor-market’s mandated floor, and pull the rug out from under American workers.

These findings are backed up by decades of studies. For example, a 1995 study conducted by Augustine Kposowa found that when compared to white Americans, “non-whites appear to lose jobs to immigrants and their earnings are more depressed by immigrants.” These non-whites mostly include black and Hispanic American citizens.

A 1998 study of the New York area by David Howell and Elizabeth Mueller of the New School for Social Research found that a 10 percent increase in the immigrant share of any given occupation reduced wages of the black men working in that occupation by five percentage points. Furthermore, the relationship held across a wide range of jobs. Basically, more immigration meant lower wages for black Americans.

I have cited these older papers not because nothing newer exists—feel free to browse the work of Harvard University’s George Borjas, or read my recent article on the economics of immigration—but to show that we have known about this for decades. And yet, the Democrats have done nothing to save their most stalwart voters from the ravages of illegal migration.

I cannot help but wonder: why?