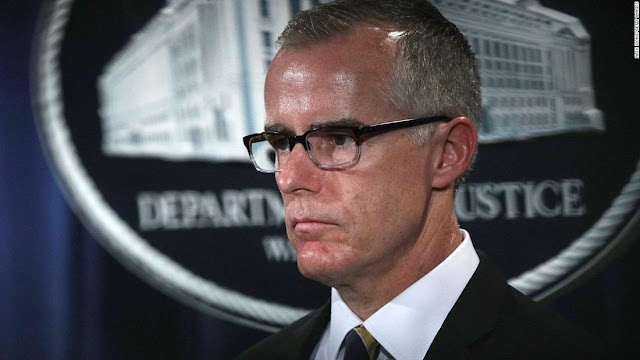 The Justice Department held meetings to consider removing President Trump from office under the 25th Amendment, after Trump fired former FBI Director James Comey for lying. If that doesn't convince you there's a Deep State, perhaps nothing will.

They wouldn't, of course, have to worry about rules, the law or moral propriety, since Clinton once in office would no doubt squelch any unwanted investigations.

"There were meetings at the Justice Department at which it was discussed whether the vice president and a majority of the Cabinet could be brought together to remove the president of the United States under the 25th Amendment," said CBS News' Scott Pelley, who interviewed McCabe.
And McCabe admits he began the obstruction of justice investigation against Trump, despite having virtually no evidence.

"The most illuminating and surprising thing in the interview to me were these eight days in May (2017) when all of these things were happening behind the scenes that the American people really didn't know about," Pelley said
Yes, and those eight days culminated in the appointment of Robert Mueller as "special prosecutor."

That ensured that no matter what happened to James Comey, Andrew McCabe or any of the others, Trump's presidency would be hobbled from the very beginning by an unjustified investigation.

This is nothing less than an attempted silent coup against a sitting president. The machinations of the FBI, CIA and Justice Department plainly indicate a conspiracy. A crime against the Constitution and the people of the U.S.

They all worked together to undermine Trump using what they knew was an unreliable "dossier" based on hearsay from questionable foreign sources and paid for by Hillary Clinton and the Democratic National Committee. Discussions of removing a legitimate American president under the 25th Amendment shows their desperation after Trump's surprising 2016 victory.
Together, they decided that democracy was too important to be left to the people, and Trump's removal had to be stage-managed instead by them from behind the scenes.

And they lied about it. Or kept quiet about it. Or misrepresented what they did, even to the Foreign Intelligence Security Court. That is real obstruction of justice. And a real conspiracy.

This wasn't because they had evidence of a crime.

Inside-the-Beltway elites fought to subvert the presidency of someone they, not the rest of America, deemed unfit for the presidency.

The more we learn, the more tenuous the evidence seems. And the more devious and partisan the major Deep State players seem. Is it possible the Mueller investigation has something of which no one is aware? Sure. But he hasn't shown anything yet. Nor has he even hinted he has something.

And if, indeed, he doesn't, the legal scrutiny should turn away from Trump to those who, from the apparent safety of their taxpayer-funded Deep State offices, planned to take down a president they didn't like.

https://www.investors.com/politics/editorials/andrew-mccabe-deep-state-trump/
Posted by Frances Rice at 11:17 AM