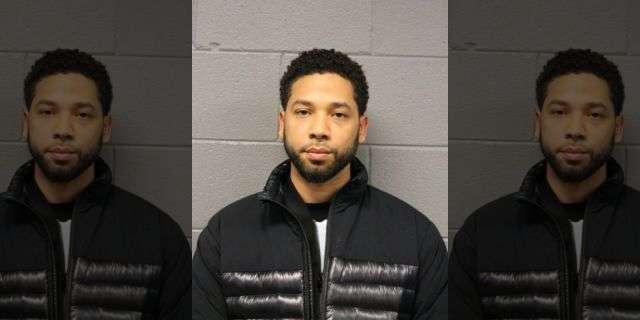 The mug shot of Jussie Smollett after he was arrested by Chicago police. (Chicago PD)

Chicago cops laid out their case against "Empire" actor Jussie Smollett Thursday morning, accusing the TV star of orchestrating an elaborate hoax involving two "bogus" hate crimes -- one involving an alleged attack, and one involving a threatening letter -- all in order to get a pay raise.

Chicago Police Superintendent Eddie Johnson said Smollett orchestrated a "phony attack" in order to take "advantage of the pain and anger of racism to promote his career."

Johnson said at a news conference Thursday that Smollett, 36, also sent a racist and homophobic threatening letter to himself at the Fox studio lot before the attack because he was dissatisfied with his salary.

"I'm left hanging my head and asking why," a visibly upset Johnson told reporters. "Why would anyone, especially an African-American man, use the symbolism of a noose to make false accusations? How could someone look at the hatred and suffering associated with that symbol...how can an individual who has been embraced by the city of Chicago turn around and slap everyone in this city by making this false claim?"

Following three weeks of mounting suspicions, Smollett, who is accused of filing a false police report, was charged Wednesday with felony disorderly conduct. He turned himself in at central booking early Thursday. If convicted, he is facing up to three years in prison. A judge set Smollett's bond for $100,000 later on Thursday.

Smollett told police he was attacked by two masked men as he was walking home from a Subway sandwich shop at around 2 a.m on Jan. 29. The actor, who is black and gay, said the masked men beat him, made derogatory comments and yelled "This is MAGA country" — an apparent reference to President Donald Trump's campaign slogan, "Make America Great Again" — before fleeing.

Johnson said police found the "check that [Smollett] used to pay [two brothers]" to fake the beating, adding he paid them $3,500 "for the two of them in total, and then $500 upon return."

Johnson was also incensed at the spotlight the incident put on his town for the past three weeks.

“This is shameful because it painted this city that we all love and work hard in, in a negative connotation," he said. "To insinuate and stage a hate crime of that nature when he knew that as a celebrity he’d get a lot of attention… It’s despicable. It makes you wonder what’s going through someone’s mind.”

"As a black man, who spent his entire life living the city of Chicago, I know the racial divide that exists here. I know how hard it's been for our city and our nation to come together," he said. Johnson added that "absolute justice would be an apology to this city that he smeared....admitting what he did and then be man enough to offer what he should offer up in terms of all the resources that were put into this."

"Empire" is shot in Chicago and follows a black family as they navigate the ups and downs of the recording industry. 20th Century Fox Television and Fox Entertainment told Fox News on Thursday, "We understand the seriousness of this matter and we respect the legal process. We are evaluating the situation and we are considering our options."

In less than a month, the 36-year-old changed from being the seemingly sympathetic victim of a hate crime to being accused of fabricating the entire thing.

The felony charge emerged on the same day detectives and the two brothers, who were initially viewed as suspects, testified before a grand jury. Smollett's attorneys met with prosecutors and police, but it was unknown what they discussed or whether Smollett attended the meeting.

In a statement to Fox News on Wednesday, Smollett's attorneys Todd Pugh and Victor Henderson said the actor "enjoys the presumption of innocence, particularly when there has been an investigation like this one where information, both true and false, has been repeatedly leaked." They did not provide further comment when contacted by Fox News on Thursday.

Police say the investigation shifted after they questioned the two brothers who were in the area that morning. Police said Thursday that Smollett spoke to the brothers an hour before and an hour after he says they helped the actor stage last month's attack.

Detective Commander Edward Wodnicki said at the news conference that after questioning the brothers for nearly two days last week, they were released and investigators no longer viewed them as suspects. 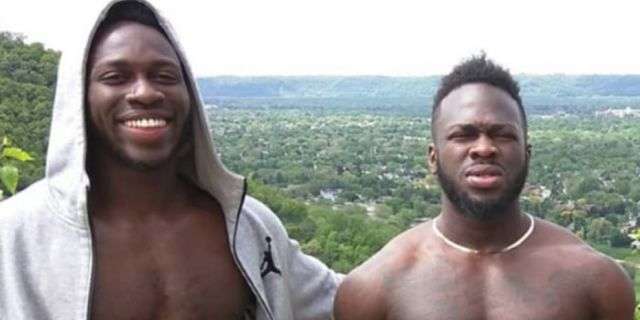 The brothers, who were identified by their attorney as Abimbola "Abel" and Olabinjo "Ola" Osundairo, were initially held for nearly 48 hours on suspicion of assaulting Smollett. Police said one of the men had worked on "Empire," and Smollett's attorneys said one of the men is the actor's personal trainer, whom he hired to help get him physically ready for a music video. The actor released his debut album, "Sum of My Music," last year.

Why would anyone, especially an African-American man, use the symbolism of a noose to make false accusations?

— Chicago Police Superintendent Eddie Johnson
Investigators said they have phone records that show there were extensive communications between Smollett and the brothers.

Speaking outside the courthouse where the grand jury met on Wednesday, the brothers' attorney said the two men testified for about two and a half hours.

"There was a point where this story needed to be told, and they manned up and they said we're going to correct this," Gloria Schmidt said.
She said her clients did not care about a plea deal or immunity. "You don't need immunity when you have the truth," she said.

She also said her clients received money from Smollett, but she did not elaborate.

Smollett has been active in LBGTQ issues, and initial reports of the assault drew outrage and support for him on social media, including from Sen. Kamala Harris of California and TV talk show host Ellen DeGeneres.

But several hours after Smollett was declared a suspect and the charges announced, there was little reaction from celebrities online.

Smollett, who has a record — one that concerns giving false information to police when he was pulled over on suspicion of driving under the influence. According to records, he was also charged with false impersonation and driving without a license. He later pleaded no contest to a reduced charge and took an alcohol education and treatment program.