When Can Blacks Be Homosexual, Illegal and Muslim?

This is nothing new.

These organizations and their people have been doing this for decades, but
the consequences seem to be more devastating now than ever before.

When can Blacks be homosexual?

When can Blacks be illegal?

When can Blacks be Muslim?

These media appointed groups and individuals have allowed other people’s issues to become our issues when they have absolutely nothing to do with the interests of the Black community.

When did the promotion of homosexuality become a vital issue within the Black community or a Civil Right?

I didn’t read that in any of the Rev. Dr. Martin Luther King, Jr.’s speeches.

These Black elites have allowed the radical homosexual movement to highjack the Black community’s agenda.

The homosexual community is one of the most racist groups in American when it comes to Blacks.

“You [the homosexual community] want to be accepted by other people, but you don’t even accept someone just because of the color of their skin?”

When did securing amnesty for those in the country illegally become the number one issue in the Black community?

So, let me make sure I understand.

When did Islam become the dominant religion in the Black community?

An overwhelming majority of Blacks are Christians, not Muslim; but you wouldn’t know that based on the amount of energy and time that is given to the defense of Islam by these fake Black leaders.

Juxtapose the Congressional Black Caucus’ defense of Islam in the public square with their silence when Christianity was pissed on by Joy Behar from the TV show The View.

She said that if Vice President Mike Pence thinks Jesus talks to him he has a “mental illness.”

Not one word from any Black Civil Rights group denouncing Behar’s remarks.

I often joke that the best way to get attention as a Black Republican within my party is to be a Black Democrat.

Similarly, the best way to get these media appointed Black leaders to pay attention to our community is to be homosexual, illegal, or Muslim.

But, if you are actually attracted to a person of the opposite sex, you are considered a freak.

If you actually believe in taking care of American citizens versus illegals and those who want to immigrate to the U.S., shame on you!

And God forbid that you really do believe in Christianity.

And don’t even think about actually having traditional values like marriage being reserved for a man and a woman.

Isn’t it amazing that President Trump’s raison d’etre for his campaign was protecting the American worker from foreigners?

In eight years under Obama, he never talked about the harmful effects of illegal immigration on the Black community.

These organizations represent their membership; but not the Black community.  There is a difference.

The rank and file of the Black community do not support the radical homosexual agenda.

They do not support amnesty for illegals.

They believe in traditional Christian values.

So why is this not reflected by these Black groups and radical liberal quasi-Black journalists?

The answer is quite simple.

They have been bought and paid for by the purveyors of radical liberal thought and use them to keep the Black community in bondage.

Their very existence is dependent upon Blacks being addicted to insidious government programs where every aspect of their lives is being controlled.

I was once told that the sign of a great teacher is one who makes himself increasingly unnecessary.

Within the Black community, you have a whole cottage industry that is predicated on Blacks being dependent on the drug of government programs.

If the Black community is to become whole again, these elitist Blacks must become unemployed.

If we decrease the Black teenage pregnancy rate, how would Planned Parenthood make money?

If Blacks stopped killing each other and stopped selling drugs, who would fill up all the beds in jail?

A large portion of the Black middle class exists and thrives off the negative pathologies within the Black community.

There is absolutely no incentive within the Black liberal elite class to solve the problems within our community; because in doing so means making them unemployed. 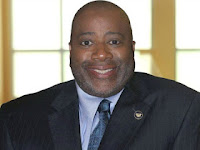 Raynard Jackson is a Pulitzer Award nominated columnist and founder and chairman of Black Americans for a Better Future (BAFBF), a federally registered 527 Super PAC established to get more Blacks involved in the Republican Party. BAFBF focuses on the Black entrepreneur. For more information about BAFBF, visit  www.bafbf.org .

https://raynardjackson.blogspot.com/2019/02/when-can-blacks-be-homosexual-illegal.html?m=1
Posted by Frances Rice at 11:31 AM