Cohen in the Colosseum

By The Editorial Board | WSJ 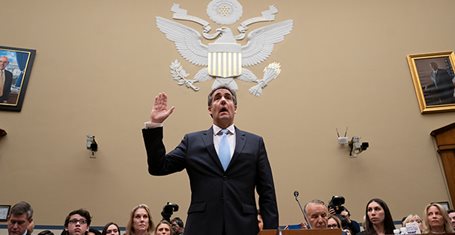 The legal fixer unloads on his former boss, with little new information.

Are you not entertained? That disdainful line from “Gladiator” came to mind watching Democrats and Republicans maul each other Wednesday over Michael Cohen’s long denunciation of Donald J. Trump.
...

Democrats will need more than the testimony of a former fixer to impeach him.

Mr. Cohen spared no nasty noun in describing the mogul turned President he served—blindly he now says—for 10 years. “Con man,” “racist” and “cheat” were highlights, as Mr. Cohen unburdened himself of what he called a decade of lies. He admitted lying for years to protect Mr. Trump, including to Congress, though he now says he’s telling the truth to ruin him. He will soon serve a three-year sentence for his crimes, most unrelated to Mr. Trump.

Histrionics aside, the hearing revealed few new details. The most potentially damaging was Mr. Cohen’s disclosure that Mr. Trump knew in advance about the WikiLeaks dump of hacked Democratic documents in July 2016. He says he was present in Mr. Trump’s office when Roger Stone, a Trump hanger-on, called to say he’d personally confirmed the dump with WikiLeaks founder Julian Assange. Mr. Cohen says Mr. Trump replied “to the effect of, ‘wouldn’t that be great.’”

Yet there is no evidence that Mr. Stone ever communicated with Mr. Assange, and Special Counsel Robert Mueller’s indictment makes no such claim. Mr. Cohen offered no evidence that Mr. Trump had a hand in hacking or releasing any emails, and it is hardly a surprise if Mr. Trump privately cheered the release of damaging information on Hillary Clinton. He said so publicly during the campaign.

Mr. Trump could be in trouble if he lied to Mr. Mueller about what he knew about WikiLeaks, but we won’t know that until the special counsel reports.

The same goes for evidence of Russia-Trump collusion, as Mr. Cohen said he had none. Instead he offered “my suspicions” based on overhearing a conversation between Mr. Trump and his son, Don Jr., that suggested Mr. Trump knew in advance about the 2016 Trump Tower meeting with a Russian lawyer. Don Jr. said an unspecified meeting had been "set,” and his father said “OK, good.” The main political risk here would also be if Mr. Trump lied to Mr. Mueller about what he knew.

On one point Mr. Cohen helped Mr. Trump by confirming that the President had not ordered him to lie to Congress about when discussions ended over an attempt to build a Trump hotel in Moscow. Mr. Cohen originally told Congress those talks ended in January 2016, though they had stretched into the summer. Instead, Mr. Cohen said he knew Mr. Trump wanted him to lie because his former boss talks in “code.” Don’t try using that as evidence in court.

More factually substantial was Mr. Cohen’s account of his hush-money payments to two women during 2016, including one in October. The fixer said that Mr. Trump’s order to pay came soon after the Access Hollywood tape “wildfire” and reflected Mr. Trump’s concern that news of the alleged affairs would hurt him with women voters. Part of Mr. Cohen’s December conviction related to his role in what prosecutors said was this campaign-finance crime.

Mr. Cohen showed a personal check from Mr. Trump to reimburse him for the payoffs, and it’s hard to dispute that the President lied to the public about his involvement. It’s also another self-inflicted wound since Mr. Trump didn’t need to pay the women. Every sentient voter knew Mr. Trump’s history with women, and he was running against a woman who had defended her husband’s mistreatment of other women.

One explanation is that Mr. Trump wanted to conceal the alleged affairs from his wife, and Mr. Cohen admitted that Mr. Trump asked him personally to lie to Melania Trump. But that might help Mr. Trump on campaign-finance liability since his marriage is unrelated to the campaign. Former Sen. John Edwards was acquitted of similar charges in 2012.

The day was above all a reminder that Americans elected a President in 2016 who had spent decades in the sleazier corners of New York business and tabloid life. He surrounded himself with political rogues like Mr. Stone, legal hustlers like Mr. Cohen, and even brought in a Beltway bandit from central casting, Paul Manafort, as his campaign chairman for a time.
...

How much will it matter politically? Little in Wednesday’s hearing spoke well of Mr. Trump, but little of it will surprise Americans or by itself rise to an impeachable offense.

But the impeachment machinery is now up and running.

Democrats may find it’s not easy to stop, though they’ll need witnesses who are more credible than Michael Cohen.