Omar Thanks Jewish Colleagues for 'Educating' Her on Anti-Semitism 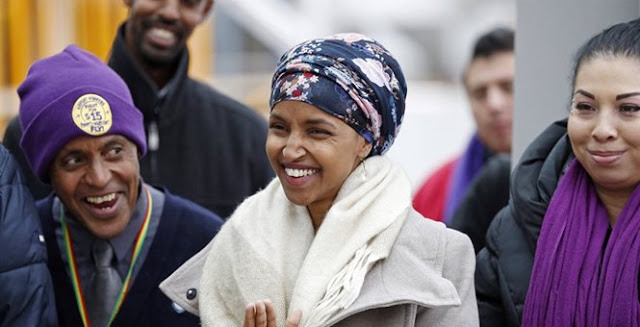 Following mounting criticism about her anti-Israeli sentiments in Congress, and on Twitter, Rep. Ilhan Omar (D-MN) was compelled to release the following statement. In it, she thanks her Jewish colleagues for "educating" her on the harms of anti-Semitism. She "unequivocally apologizes" for her rhetoric. 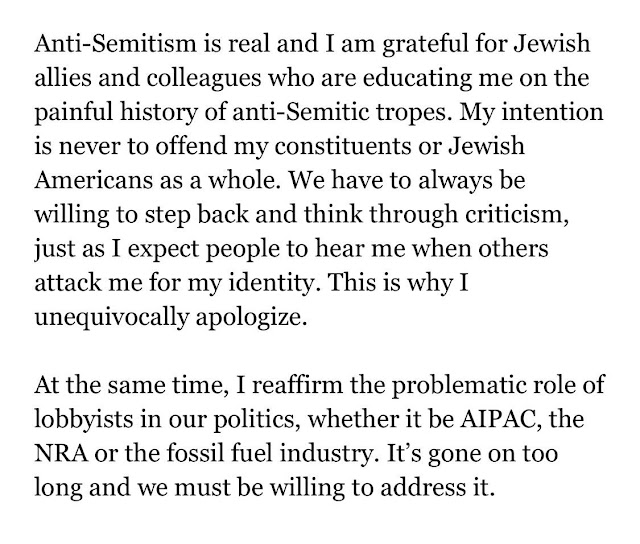 Judging by her extra note at the bottom of the above "apology," however, she doesn't exactly feel bad about accusing Republicans of supporting Israel because of the fundraising that accompanies it. "It's all about the Benjamins baby," she wrote on Twitter over the weekend.

It's all about the Benjamins baby

GOP Leader Kevin McCarthy threatens punishment for @IlhanMN and @RashidaTlaib over their criticisms of Israel. It's stunning how much time US political leaders spend defending a foreign nation even if it means attacking free speech rights of Americans.

Omar has also tweeted her belief that Israel has "hypnotized the world." As recently as last month, she wondered aloud how those sentiments could be interpreted as offensive. She also knowingly supports the BDS movement, a campaign that promotes the boycotting of Israeli goods and services. When Manu Raju tried to get an explanation out of her, she ran away.

Omar's recent remarks have been received so poorly that Democratic leadership distanced themselves from her on Monday.

"Congresswoman Omar’s use of anti-Semitic tropes and prejudicial accusations about Israel’s supporters is deeply offensive," House Speaker Nancy Pelosi and other Democratic leaders wrote. "We condemn these remarks and we call upon Congresswoman Omar to immediately apologize for these hurtful comments." 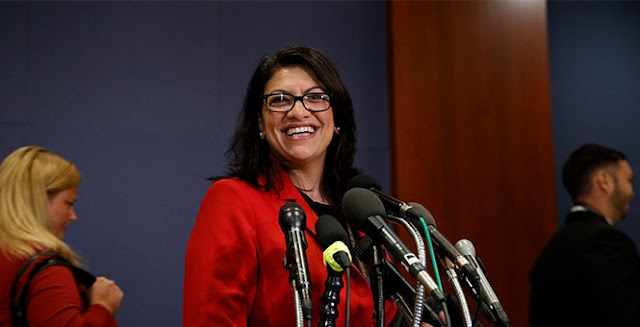 “Lost in the often-vitriolic national quarrel over immigration reform is any examination of proposed measures that would result in excessive punishment, such as detention and deportation, for the most minor offenses,” the Palestinian-American congresswoman wrote in the 2006 column. “Concern for 'national security' has introduced unprecedented insecurity to living in the United States as a legal permanent resident.”

The column, which is not accessible online, was unearthed by blogger Jeryl Bier.

"The article is entitled "Bills must stop deportations for minor offenses" and addressed the problem of legal immigrants deported for technicalities and other relatively minor issues," he wrote on his blog.

Since the time of Tlaib’s writing, Final Call has published numerous articles espousing anti-Semitic conspiracies with headlines such as “Racist Rabbis: A Long History of Jewish Race-Haters,” “The Secret Relationship Between Rappers and Jews,” and “Solving The Mystery of Jewish Financial Success,” among others. Tlaib has not published in the outlet since her initial 2006 column.

Tlaib has faced significant criticism since her election over her ties to anti-Semitic Palestinian activists and her support for the Boycott, Divestment, and Sanctions movement, which seeks to put financial pressure on Israel. In January, she attended a dinner with Palestinian activist Abbas Hamideh, who has referred to Israel as a “terrorist identity” and likened the state’s underlying ideology to that of ISIS.

While Tlaib's office did not respond to Bier for comment, a spokesperson did issue a statement to Business Insider.