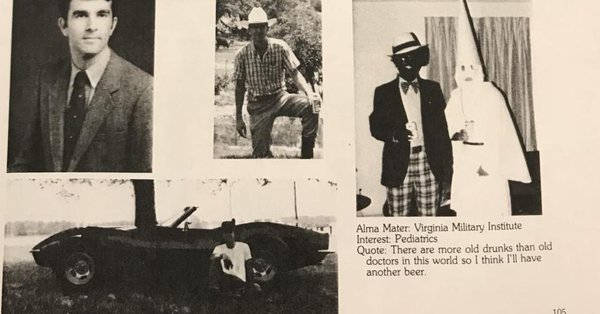 Ralph Northam yearbook page shows blackface and Klan photo
The photo, never previously reported, is from the Eastern Virginia Medical School 1984 yearbook. It was posted on the web Friday after a week in which Northam was attacked over defending infanticide.

Details: The identities of the two people in the photo are unknown, but the picture is next to photos of Northam. The photo's caption lists Northam's alma mater, his interest in pediatrics, and a quote that reads: "There are more old drunks than old doctors in this world so I think I'll have another beer." Northam's office has yet to issue a statement or respond to Axios' request for comment. 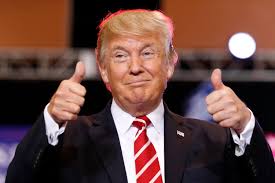 Job growth in January shattered expectations, with nonfarm payrolls surging by 304,000 despite a partial government shutdown that was the longest in history, the Labor Department reported Friday.

The unemployment rate ticked higher to 4 percent, a level where it had last been in June, a likely effect of the shutdown, according to the department.

However, officials said federal workers generally were counted as employed during the period because they received pay during the survey week of Jan. 12. On balance, federal government employment actually rose by 1,000.

Economists surveyed by Dow Jones had expected payrolls to rise by 170,000 and the unemployment rate to hold steady at 3.9 percent.

In all, it was a powerful performance at a time when economists increasingly have said they expect growth to slow in 2019. January marked 100 months in a row of positive job creation, by far the longest streak on record.

Stock futures and Treasury yields jumped in response to the better-than-expected report. 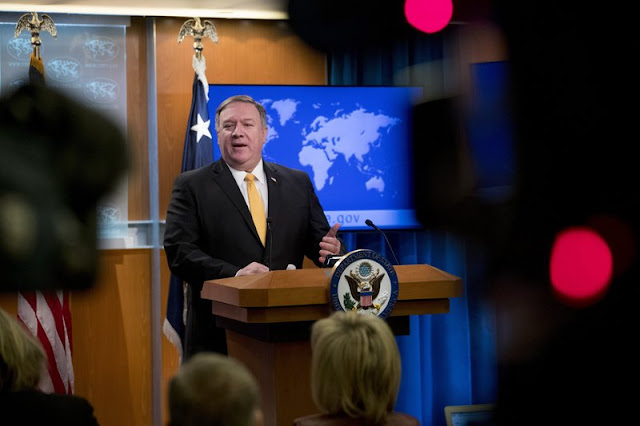 WASHINGTON (AP) — The Trump administration is pulling the plug on a decades-old nuclear arms treaty with Russia, lifting what it sees as unreasonable constraints on competing with a resurgent Russia and a more assertive China. The move announced Friday sets the stage for delicate talks with U.S. allies over potential new American missile deployments.

In explaining his decision, which he had foreshadowed months ago, President Donald Trump accused Moscow of violating the 1987 Intermediate-Range Nuclear Forces treaty with “impunity” by deploying banned missiles. Moscow denies it is in violation and has accused Washington of resisting its efforts to resolve the dispute.

Democrats in Congress and some arms control advocates criticized Trump’s decision as opening the door to an arms race.

Trump said in a statement that the U.S. will “move forward” with developing its own military response options to Russia’s banned deployment of cruise missiles that could target western Europe.

“We cannot be the only country in the world unilaterally bound by this treaty, or any other,” Trump said. Other officials said the treaty could still be saved if Russia reverses course and returns to compliance, but that window of opportunity will close in six months when the American withdrawal is due to take effect.

The Trump decision reflects his administration’s view that the arms treaty was an unacceptable obstacle to more forcefully confronting not only Russia but also China. China’s military has grown mightily since the treaty was signed, and the pact has prevented the U.S. from deploying weapons to counter some of those being developed in Beijing.

Leaving the INF pact, however, risks aggravating relations with European allies, who share the administration’s view that Russia is violating the treaty but who have not endorsed a U.S. withdrawal.

Secretary of State Mike Pompeo, speaking to reporters after Trump’s statement, said Russia will be formally notified on Saturday that the U.S. is withdrawing from the treaty, effective in six months. In the meantime, starting Saturday, the U.S. will suspend its obligations under the treaty.

Pompeo said that if, in the coming six months, Russia accepts U.S. demands that it verifiably destroy the cruise missiles that Washington claims are a violation, then the treaty can be saved. If it does not, “the treaty terminates,” he said.

Administration officials have dismissed concerns that the treaty’s demise could trigger a race to develop and deploy more intermediate-range missiles. U.S. officials have emphasized their fear that China, which is not party to the treaty, is gaining a significant military advantage in Asia by deploying large numbers of missiles with ranges beyond the treaty’s limit.

Whether the U.S. will now respond by deploying INF noncompliant missiles in Asia is unclear. In any case, it seems unlikely Beijing would agree to any negotiated limits on its weaponry.

Russia accused the U.S. of unilaterally seeking to neuter the treaty.
“I ‘congratulate’ the whole world; the United States has taken another step toward its destruction today,” said Konstantin Kosachev, head of the foreign affairs committee in Russia’s upper house of parliament.

INF was the first arms control measure to ban an entire class of weapons: ground-launched cruise missiles with a range between 500 kilometers (310 miles) and 5,500 kilometers (3,400 miles).

At the time, in the late stages of the Cold War, the U.S. and its allies were mainly concerned by the perceived threat of Russian medium-range nuclear missiles that were targeted at Europe. The U.S. deployed similar missiles in response, in the 1980s, leading to negotiations that produced the INF treaty.

“The administration’s ideological aversion to arms control as a tool for advancing national security is endangering our safety, as well as that of our allies and partners,” Smith said. “The risk of miscalculation or misunderstanding is already higher than at any point since the end of the Cold War, and this decision only makes it worse.”

U.S. officials say they have little reason to think Moscow will change its stance in the next six months.

“We have raised Russia’s noncompliance with Russian officials — including at the highest levels of government — more than 30 times,” Pompeo said. “We have provided Russia an ample window of time to mend its way. Tomorrow that time runs out.”

Jens Stoltenberg, the NATO secretary-general, said in an interview Friday with The Associated Press that Russia can still save the treaty by returning to compliance before the U.S. withdrawal takes effect.

“But at the same time, we have started to assess the consequences, look into options,” Stoltenberg said. “We need to make sure that we respond as an alliance, all 29 allies, because all allies are involved and all allies are affected.”
Trump said his administration will move forward with developing military response options.

But senior Trump administration officials said they don’t expect any immediate testing or deployment of weapons that are banned under the treaty. The current Pentagon budget includes $48 million for research on potential military responses to the alleged Russian violations, but U.S. officials said the options do not include a nuclear missile.

The officials, speaking after Trump’s announcement, said the U.S. is not in position to flight test, let alone deploy, INF noncompliant missiles as a counter to Russia any time soon. The officials spoke on condition of anonymity under ground rules set by the White House.

One official said allies will be consulted before any decisions are made on responding to any Russian missiles.

Leaving the treaty would allow the Trump administration to counter the Chinese, but it’s unclear how it would do that. U.S. security concerns are complicated by what U.S. intelligence officials earlier this week called efforts by China and Russia to expand their global influence, particularly in Asia and the Middle East.

“China and Russia are more aligned than at any point since the mid-1950s, and the relationship is likely to strengthen in the coming years as some of their interests and threat perceptions converge,” Director of National Intelligence Dan Coats said in testimony Tuesday to Congress.