And the Clear Winner of the first two Democratic Party Debates is — Donald J. Trump 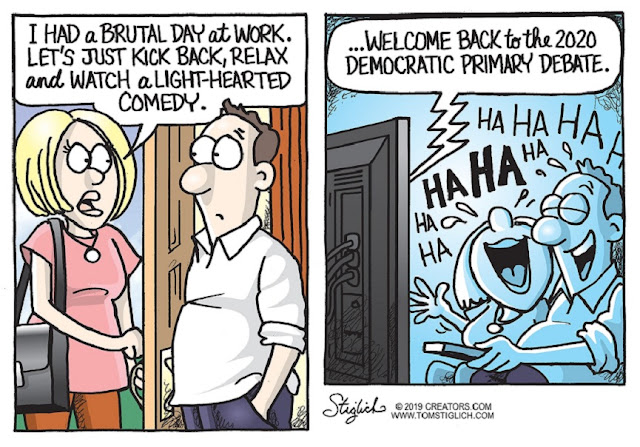 The large field of Democrats who are vying for their party’s nomination to run against President Trump has not started out well.

Two debates were held in Miami, FL. After the second debate the DNC Headquarters sent out a survey asking “Which Democratic candidates did you most enjoy hearing from on the debate stage?” Enjoy hearing from? Is this a talent contest or a race for the presidency?

After listening to the Democrats running it has become clear as Senator Kamala Harris said, “America does not want to witness a food fight, they want to know how we’re going to put food on their table.” The question is who’s putting that food on the table, the working fathers and mothers of America or the federal government.

President Trump used Twitter to respond to each debate. Trump characterized the first debate as “boring.” The second debate Trump tweeted, “All Democrats just raised their hands for giving millions of illegal aliens unlimited healthcare. How about taking care of American Citizens first!? That’s the end of that race!”

Here is a short list of why the Democratic candidates, and their party, are out of touch with the American people:

1.   They hate President Trump. Senator Bernie Sanders said during the second debate, “You asked before, what is the greatest national security threat to the United States, it’s Donald Trump.” No matter what President Trump does, it is wrong, hateful, bigoted or just plain evil.
2.   Jobs, jobs, jobs. President Trump has put more people to work, and taken more people off of government welfare, so that families can “put food on their table.” As former President Bill Clinton said, “It’s the economy stupid.”
3.   Free stuff. The Democratic candidates love the word free. Free is not freedom. Free means some lose their ability to put food on their tables so others, i.e. illegal aliens, can have government benefits.
4.   Tribalism. The Democrats focus on tribes (e.g. blacks, Hispanics, LGBT, illegal aliens) and not Americans or America. They try to speak Spanish in order to show their compassion for minorities and not the majority.
5.   Pandering. The Democrats face a tough race and therefore pander for votes. Bernie Sanders panders to the young voter by promising to pay off all student debt. But by doing so he ignores the 2/3rds that have no college degree. It’s this 2/3rds that will pay off the debt of the 1/3 who get a degree.
6.   Taxes and big government. The only way to pay for all of the various proposals made during the debates is to raise taxes. The mantra is tax the rich to help the poor. Venezuela and Cuba are examples of how taxation trickles down to the poor very quickly as the rich become poorer and the poor become poorer.
7.   Equality for me but not for thee. Equality is a loaded word. For Democrats equality means a variety of ideals: equal pay for all (e.g. minimum wage), equal rights (for some more than others) and equal distribution of wealth (taking wealth from the successful and giving it to the unsuccessful). It does not mean equal justice under the law.
8.   Diversity. Diversity is the second most loaded word used by Democrats. Diversity means you cannot criticize anyone who is different than you. If you are white you cannot criticize someone born with a differ skin tone. In many cases, if you are a person with a different skin tone and you support Trump you are, by definition, a racist.
9.   The Big Lies. Democrats tell big lies like: no one is here illegal, the world will end in 10 years due to climate change, killing a baby born alive is moral, Americans must pay for government funded abortion for transgender men and finally the biggest whopper, more government is necessary to fix just about anything and everything.
10.   Control. Politics is not about which party you belong to. Politics is all about control. Politicians want control, politicians want to control their constituents and politicians want others to become dependent upon them. The more dependent one is to a politician, the better for the politician. It’s call modern day slavery.

Marxism and the Democratic Debates

Andrew Yang when asked to defend his proposal to pay $1,000 a month, to every American, from the federal government, said, “It’s difficult to do if you have companies like Amazon, trillion-dollar companies, paying zero in taxes.”

Karl Marx wrote, “The last capitalist we hang shall be the one who sold us the rope.” Will Amazon be the last company to ship us (free if your a member of Amazon Prime) the rope to collectively hang ourselves?

It appears the Democratic Party’s candidates, to one extent or another, want to hang every capitalist (i.e. working American) in our nation.

As Leon Trotsky wrote: “The old principle: who does not work shall not eat, has been replaced with a new one: who does not obey shall not eat.” Democrats want to control/regulate the means of food production (see Green New Deal). Also, see food rationing in Communist Cuba.

Why Trump Won Both Debates!

As President Trump said during his inaugural address:

Today’s ceremony, however, has very special meaning because today we are not merely transferring power from one administration to another – but transferring it from Washington DC and giving it back to you the people.

For too long a small group in our nation’s capital has reaped the rewards of government while the people have borne the cost.

Washington flourished but the people did not share in its wealth. Politicians prospered but the jobs left and the factories closed.

The establishment protected itself but not the citizens of our country.

That all changes starting right here and right now because this moment is your moment. It belongs to you. It belongs to everyone gathered here today and everyone watching all across America today.

This is your day.

This is your celebration.

And this – the United States of America – is your country.

Trump noted, “What truly matters is not what party controls our government but that this government is controlled by the people.”

Power to the people is winning! Are you tired of winning?

Here are two interesting political satire videos by Carpe Donktum on the debates.

What really happened during the Democrat debate.

https://drrichswier.com/2019/06/28/and-the-clear-winner-of-the-first-two-democratic-party-debates-is-donald-j-trump/
Posted by Frances Rice at 10:51 AM